Danny Boyle brings the Trainspotting gang back together 20 years later when Mark Renton (Ewan McGregor) decides to take a stroll down memory line in T2 Trainspotting.

Doing a sequel to a film 21 years on is always going to be an uphill struggle because what worked back then doesn’t necessarily work now. There will always be the question over whether revisiting something is going to be worthwhile or a statement that there are no more ideas so all that’s left is to revisit past glories.

This actually becomes the theme of this film and the story takes the form of an exploration of that very question. McGregor’s Renton has fallen upon hard times in his new life and decides to return to his old stomping grounds to look up old friends and figure out where it all went wrong. As you might expect going back isn’t as easy as he thought it would be and the story spirals from there.

The rest of the gang have all changed in various ways. Spud (Ewen Bremner) has come full circle after a darkly funny twist of fate undoes all the good work he did to rebuild his life, Simon aka Sick Boy (Jonny Lee Miller) hasn’t really gone anywhere in life and has been really bittered by the years. Francis Begbie (Robert Carlyle) is fresh from a prison break and is completely out for blood so things have changed but have oddly stayed the same and the revelation Renton comes to is that his life hasn’t really improved been improved by stealing money from his friends and going after a fresh start. 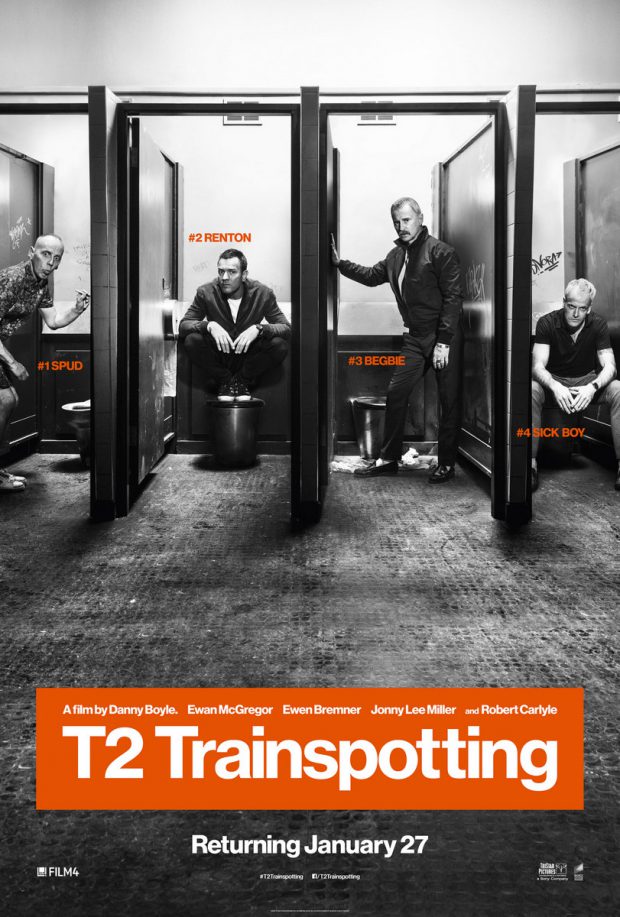 In terms of their performance the actors all slot into their old characters with ease. Seeing the gang back together is as entertaining a ever and the actors all do a great job reminding us of why these characters were so engaging in the first place.

A line of dialogue in the film calls Renton “a tourist in his own youth” and that’s probably the most appropriate description for his role in this film. He is very keen to recount the glory days through rose tinted spectacles and wax lyrical about how life was much more simple back then but the reality of the situation is that those days were more brutal than he remembers them. It’s a great theme to hang the film on because modern society is very obsessed with nostalgia so it’s instantly relatable.

The problem with the film is that it’s a little too nostalgic. There are a lot of callbacks to the first film that do feel important but it also prevents this story from standing on its own as something worth telling. Renton’s quest for validation is never really resolved which seems fitting in some ways as he has returned to the dead end life that he tried to escape but in other ways the whole experience feels a little unfulfilling. It’s almost as if there is no conclusion and it’s just another look at an endless cycle. Maybe that’s fitting for these characters but I was hoping for some kind of resolution.

Another issue is that the female characters don’t have a lot to do. Kelly Macdonald’s Diane appears for little more than a cameo in a role that’s relatively insignificant in terms of the overall story. Sick Boy’s business partner/girlfriend Veronika (Anjela Nedyalkova) has a more substantial role but falls into the background often. Her modern take on the relationships between the four main characters is an interesting perspective that could definitely have been developed more.

T2 Trainspotting has it where it counts though. It’s entertaining and funny it needs to be with lots of memorable lines and situations. It is nowhere near as hard hitting as the first film and overall isn’t quite as good but that’s a hurdle it was realistically never going to clear.

It’s also a very good looking film with lots of really memorable images to feast your eyes on. Danny Boyle even manages to make the much maligned Edinburgh Trams look exotic and glamorous in a rapid travelling sequence. On the flip side the film does look very glossy which feels a little jarring when compared to the grimy aesthetic of the original. Technology has moved on and the budget for this is a lot higher so these things will happen. It doesn’t detract from how great the film looks but it is something I noticed.

A solid follow up to a much recognised classic. The trip down memory lane theme comes across well and the actors all sink easily back into their old characters. In some ways the nostalgia is laid on a little to thick with very little in the way of resolution to Renton’s mid life crisis but that seems oddly appropriate for these characters. Female characters are also sidelined but the film has it where it counts. It’s not as hard hitting as the original and isn’t quite as good but those are really big shoes to fill so that’s no surprise. It’s a great looking film and makes Edinburgh look stunning even if the glossy imagery is slightly jarring when compared to the original. The important thing is that it’s not a pointless sequel so do yourself a favour and choose T2 Trainspotting.