I’ll start by addressing the biggest question that people will have before going into this film. Whether it’s essential to see The Room or not will probably inform many decisions to watch this film so it’s a fair question to answer. I would always recommend that people watch The Room just because it’s something that has to be seen to be believed. It isn’t essential for enjoyment of this film as James Franco’s purpose is to tell a clear story about a man throwing his resources into achieving his dream. It’s something he accomplishes so it’s easy enough to follow on a narrative level.

James Franco plays the enigmatic film-maker Tommy Wiseau; the man famous for writing, directing, producing and starring in the infamous midnight favourite The Room. Part of what makes this story so engaging is the fact that Tommy Wiseau is a larger than life figure by himself. Without going into too much detail; the facts surrounding him are completely unknown. His age, where he comes from and where he gets his money are mysteries to this day and this film doesn’t attempt to answer them which allows the enigma to be part of the joke.

Franco’s performance is excellent from top to bottom. He undergoes a physical transformation thanks to the use of convincing facial prosthetics while mimicking the distinctive accent and mannerisms of the man in question. Outside of a few moments here and there where the accent slips Franco completely nails it and accomplishes a lot in more understated scenes where he concentrates on showing a more subdued and introspective side of Tommy Wiseau. It works because he feels like a fully realised character rather than the wall to wall parody he could so easily have been.

As such he’s someone who can be pitied throughout. His complete lack of self awareness and unflinching belief that he has the talent necessary to be a Hollywood star becomes more sad than funny at several key points which mirrors the plot of the film he is making since both narratives reach a point where Tommy Wiseau -and his The Room character Johnny- feel betrayed and unsupported by everyone around him. He’s too self obsessed and immune to actual constructive feedback to be considered truly sympathetic but it’s certainly possible to feel pity for someone who fails to see what is so obvious for everyone else. 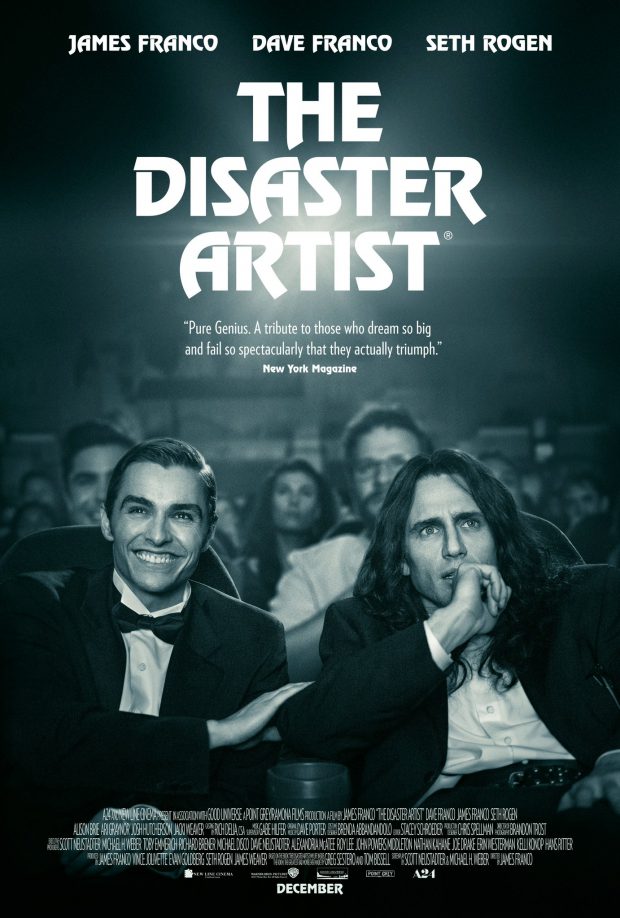 The film never reaches the point of telling a tragic tale of a delusional man as Franco is clearly more concerned with teasing out the comedy associated with the lunacy of such a production. This is a riotously funny comedy experience throughout thanks to Franco’s performance combining effortlessly with the increasingly bizarre decisions Wiseau makes as the whole production spirals out of control. There’s obvious comedy in watching a man who has no idea what he’s doing fumble his way through the production of a film but there are also subtleties in the facial expressions of those around him and the uncomfortable atmosphere created throughout the shoot.

Tommy’s friend Greg (Dave Franco) is the audience perspective. The film is based on the based on a book recounting the experience written by Greg Sestero so it’s the obvious choice as a focal point. Greg’s story starts just before meeting Tommy Wiseau in an acting class and continues right through to the premier of The Room so it’s a really detailed chronicle of the events. As the film begins Greg is young, idealistic and very naive when it comes to going after his dream of becoming an actor. It’s very believable that he would gravitate to such a strong personality to help him grow. He speaks to Tommy because he sees how fearless he is when it comes to performing in front of a crowd and he aspires to that level of confidence. At first he hopes that he can learn how to be less self conscious when acting.

As the story progresses he becomes increasingly more uncomfortable with Tommy’s off the wall personality and ridiculous behaviour. It’s interesting to see the transition from someone who supports a man who is dismissed because he’s misunderstood to seeing what it is that makes him so off-putting to so many people. Dave Franco is constantly believable in this role and anchors the film with a really relatable perspective.

Other actors are far less prominent. Alison Brie has a fairly thankless role as Greg’s girlfriend Amber who appears and disappears from the story completely at random. She was likely part of the real life events but doesn’t quite fit into the making of The Room as a story so she only appears when it’s necessary to establish something relating to Greg. As relationship’s go there’s nothing interesting about it so Alison Brie finds herself largely on the sidelines playing a character who could have had more to do. The same thing happens to Greg’s mother played by Megan Mullally though her role is very confined considering her lack of proximity to Greg and the other characters throughout much of the film.

Seth Rogen has a small yet important role as script supervisor Sandy. He’s the one trying to keep the production running to something resembling a schedule and is one of the few to openly challenge Tommy on his approach to realising his vision. His comic timing and delivery is spot on here with Sandy’s growing frustration being played to perfection. There are also a number of blink and you’ll miss it cameos throughout that will provoke a chuckle from fans of those particular actors.

One of the most striking things about this film is the attention to detail. Franco and his team slavishly recreate scenes from The Room almost precisely with different actors playing the parts. The end credits show these scenes side by side as a celebration of the work put in. Some of it comes from the particular line delivery and some of it comes from the framing of certain shots. There are some differences but on the whole these moments are lovingly recreated. It’s clear that James Franco is a fan of all aspects of this production and wanted to do it justice. In some ways it could be defined as a fan film though at its core its a story about someone going after his dream and making it a reality regardless of the objective quality of the end result.

An excellent and hilarious film with great performances across the board. James Franco deserves special recognition for his note perfect portrayal of Tommy Wiseau throughout. The character of Greg as played by Dave Franco also comes across well and makes for an engaging perspective for the audience. Some characters serve no real purpose in the context of the story such as Alison Brie’s Amber but it doesn’t detract from the overall quality. The attention to detail in recreating scenes from The Room is astounding showing real commitment to doing it justice. This film manages to tell the story with all the ludicrous details intact without it descending too far into parody; at its core it’s a story about a man going after and achieving his dream with the underlying message that anyone with a bottomless pit of money and a complete lack of self awareness could do the same.