The Fate of the Furious

The Fast and The Furious franchise roars back onto screens this weekend with its eighth cinematic instalment, F Gary Gray’s The Fate of the Furious (F8, get it?).   Officially Universal’s most successful property, Fate commands the biggest budget of the series so far – a staggering $250m, almost seven times that of the original.  Many of those millions will go towards paying the souped-up contracts of the franchise’s cast, as well as funding the demand for high-octane, physics-defying stunts – the calling card for which the series has become so famous.

With the potential to become the highest-grossing film of all time, the biggest creative question facing Fate is how does it overcome the loss of Paul Walker?  The actor died before Furious 7 was completed, and the filmmakers did an amazing job rewriting and reshooting to send Walker’s character Brian O’Connor appropriately off into the sunset.  It was an incredibly emotional finale, scored perfectly by Charlie Puth’s ‘See You Again’, and it seems an impossible task to move on from there. But the gears of Hollywood don’t stop turning for real life, and so with pedal slammed firmly to the metal we speed off for a date with fate.

The Fate of the Furious seeks to flip the standard state of play on its head, turning Vin Diesel’s Dom Toretto rogue, placing super-cop Hobbs (Dwayne Johnson) in jail and eventually teaming up ex-villain Deckard (Jason Statham) with the familiar rag-tag gang of stunt drivers/computer hackers/law enforcement officers (delete where appropriate).  Charlize Theron (wearing Angelina Jolie’s hair from Gone in 60 Seconds, so you know she has petrol-head pedigree) joins the cast as the appropriately named Cipher, the mysterious baddie with the master plan behind Dom’s heel turn.  The ABCs of the plot play out as you might expect – the gang are all shocked at Dom’s betrayal and have to pull together with help from G-men Mr Nobody (Kurt Russell) and newcomer sidekick Little Nobody (Scott Eastwood) to save the day. 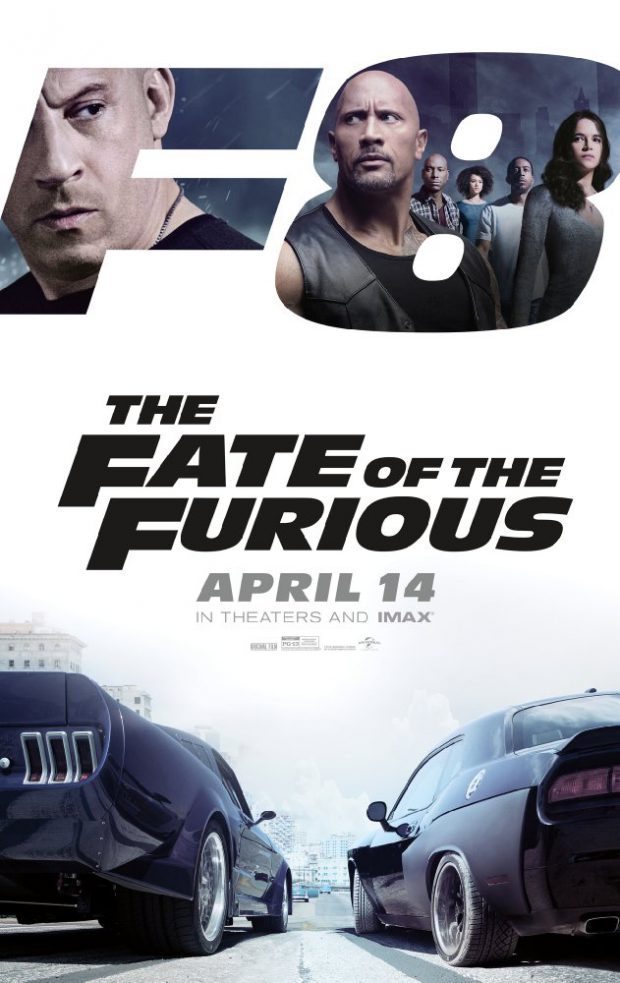 Plot devices from the preceding movies are referenced in an order to tie the story together, but these are mostly irrelevant and tend to get in the way of progressing the events of the film we’re currently watching.  The attempt at creating an overarching mythology is appreciated, but results in several expository and convoluted conversations.  The series has also developed an over-reliance on technology, and the Mission Impossible style maps and graphics appear far too often.  There’s little drama to be found in watching Cipher and Ramsey hack and counter-hack each other, despite what the film-makers want you to think.

As any fan of the series will know, certain boxes need to be ticked in order to make a Fast film A Fast Film.  Without these self-referential nods and tropes the films just wouldn’t feel right.  In the same way that wrestling fans show up to see their favourite signature moves and finishers, Fast fans need to see Dom savouring a Corona, Roman and Tej bickering incessantly, plenty of gratuitous shots of scantily-clad women and Hobbs… basically being The Rock.  Here Fate delivers with aplomb – bordering self-parody at times – but it’s all wonderfully indulgent and silly.  Audiences will be left grinning and shaking their heads simultaneously as the antics unfold on-screen.  Certain members of the cast have clearly bought in 100% to the buffoonery; the feud between Hobbs and Deckard is played to comic extremes, Kurt Russell chews the scenery as if it were a rubber chicken, and not to be outdone as the comic relief, Tyrese Gibson turns in his best performance of the series.

It’s a shame then that the Dom/Cipher elements of the movie feel flat in comparison.  We’re supposed to be invested in Dom’s struggle, but he’s such a stoic character (being generous) that there’s almost no variation in his behaviour as he robotically carries out Cipher’s orders.  Cipher (ironically?) is like a stand in for a baddie.  She initiates the plot to jeopardise Dom’s all-important family, but is played with such simmering menace (again, generous) by the undoubtedly talented Theron, that there’s almost no modulation in any of their scenes together.  This ultimately unbalances the movie, as the rest of the cast get to joke around, bouncing one-liners off each other while Dom and Cipher spend their time brooding away in the super-secret spy jet.  (By the by, it’s nice to know that even supranational terrorist organisations insist that their pilots wear uniforms.)

Even the action feels slightly subdued (compared to what has come before), and bar a mad-cap prison brawl and a visually gratifying sequence in which the streets of New York City are flooded with hacked cars, none of the set pieces surpass the steroid-enhanced records set by previous Fast movies.  Audiences have come to expect consistent escalation from the series, so despite some cleverly staged and choreographed scenes, the level of action on display here comes as a bit of a let-down.

Luckily the comedic elements save the day, as Diesel’s supporting cast steal the show.  Gibson is excellent, Johnson and Statham are killing it in a mini-movie of their own, the cameos of Russell and Dame Helen Mirren are well worth it, and Eastwood manages to step into the void left by Paul Walker, without feeling like a deliberate or cynical replacement.  The delirious pace of the banter will have audiences cracking up, and by the inevitable BBQ ending, the team has been reconfigured yet again, ready to roll on their next adventure.

The Fast and The Furious is at its best when delivering the large-scale action and bombastic attitude that helped cement it as Universal’s tent pole blockbuster.  Fate struggles to surpass the set-pieces from recent instalments but delivers plenty of laughs, one-liners and just enough reality-bending action to make it a worthy entrant in the series.  Moving on after the loss of Paul Walker was always going to be difficult, but the cast and crew of The Fate of the Furious step up admirably in tribute.  The balance of tone is off at times, but with the team undergoing a mini-reset by the conclusion of the film, we know that they’re heading in the right direction.  Even if they’ve proved many times that you can drive just as fast in reverse.