John Lee Hancock tells the story of the rise of iconic fast food franchise McDonalds from a single restaurant to multinational behemoth in The Founder.

The film follows Ray Kroc (Michael Keaton), a salesman always on the lookout for the next big thing. When we meet him he is trying to sell a milkshake mixing machine to various diners with limited success and it’s made clear that he needs something big soon or he will be completely ruined.

Enter Maurice “Mac” (John Carroll Lynch) and Dick McDonald (Nick Offerman); brothers in business who have found a way to revolutionise the drive through dining experience by developing a system that allows customers to receive their food in 30 seconds instead of 30 minutes. The sequence where they tell their story of how they came up with this to Ray is the most frenetic and fascinating sequence in the film. It really highlights the old school American dream idea where hard work and an idea can bring people from nothing to unparalleled success.

This film isn’t the story of the McDonald brothers as theirs essentially ends -at least as far as this film is concerned- once they meet Ray. He convinces them to franchise their idea and then he takes over things from there. The brothers appear from time to time with their role relegated to voicing their displeasure of Ray’s methods. 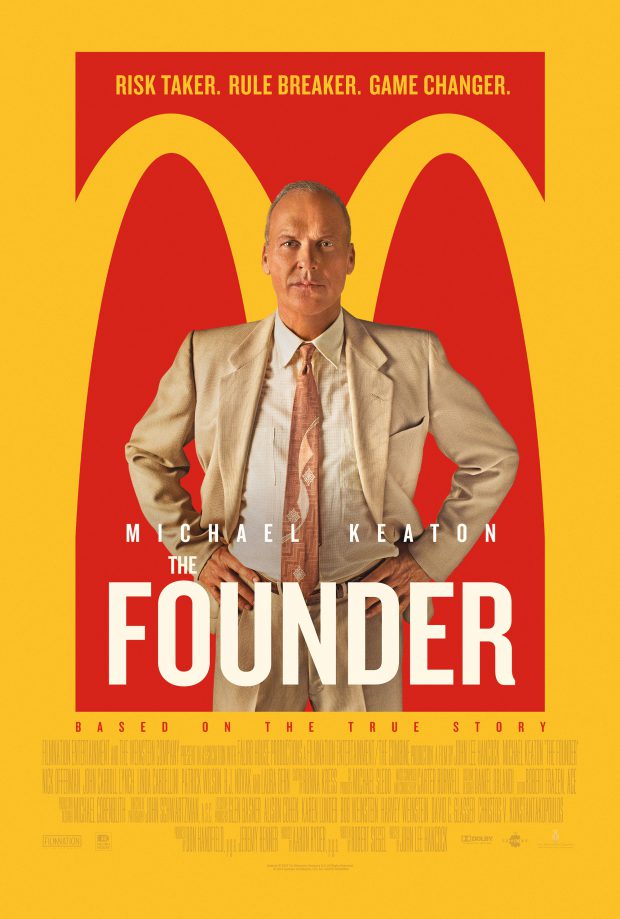 It was necessary for the story but slightly disappointing to see the excellent brotherly dynamic between Lynch and Offerman move into the background. It’s always a pleasure to see these actors work and the film is at its best when they bounce off Keaton in the first half of the story.

Ray himself is an interesting character because he’s not all that likeable. He’s clearly a very slimy individual who will step over people to get what he wants. This could have been a story about how power corrupts but I got the impression that Ray was always corrupt and just didn’t have the power to make that a real problem for anyone. In the early scenes it’s possible to have sympathy for him because he is so close to be ruined but there’s something about him that makes it very difficult to trust anything he says.

Michael Keaton completely nails this role. Ray is always engaging and watchable even if you’re not supposed to like him. The way he swindles people with a grin and a wink shows exactly how he gets to where he is and Keaton’s performance is a lot of fun to watch. The arc of him becoming more power hungry and self serving as the film progresses is well developed and it’s a character study that remains gripping throughout.

Ray’s has three central conflicts in this film. The major one is with the brothers who he slowly swindles out of their idea and their livelihood. It feels like a mistake when they go into business with him and the film builds to the confirmation of that mistake. I personally felt for the brothers as Ray is clearly the villain in their story. The film being focused on him highlights the fact that he took over something they built and perverted it in his own image. It’s a powerful story that keeps the characters at the heart of it.

Less significant in terms of how the film approaches it is Ray’s relationship with his wife Ethel (Laura Dern). At first it seems that he’s unintentionally neglectful of her as he spends so much of his time just trying to make enough money to put food on the table and as the film progresses he wilfully neglects her to the point that he’s dismissive of anything she tries to say to him. The film doesn’t put too much focus on this but it’s another example of how self serving Ray is as well as how he views people as disposable once they have served their purpose to him.

Ray’s third conflict is with money lenders and investors who all see him coming because they have met him at various points in the past. They know not to trust him and that his “get rich quick” schemes don’t ever come to anything. This is an even smaller conflict than the one he has with Ethel but it is a significant roadblock and it does add depth to the expansion story by showing the practical problems that impede progress.

Visually the film is very impressive with the set design and camera work really bringing out the 1950s aesthetic. Everything from the clothes to the cars and locations is completely on point and the scenes are very warmly lit to suggest the idealistic post war time that the film is set.

The most significant failing that the film has is that burns through plot very quickly. In some ways this is effective as it shows how rapid the rate of expansion was but the drawbacks to this is that it feels like Ray’s character changes very quickly. His development feels organic enough but there is a turning point that feels jarring thanks to the rapid pace of the film. Characters who had a lot more potential such as Harry J. Sonneborn (B.J. Novak) Rollie (Patrick Wilson) and Joan Smith (Linda Cardellini) could have had a lot more to do as their roles were memorable but vastly underused. If the film had taken its foot off the accelerator here and there then these issues could have been fixed and the experience might have felt more natural.

A compelling character study of a man the audience really isn’t supposed to like. Michael Keaton completely nails the charismatic salesman who shouldn’t be trusted while still being entertaining to watch. His performance helps carry the film and the central conflicts Ray Kroc has with the McDonald brothers, his wife and those who he wants to borrow money from are developed really well. It’s a shame that the McDonald brothers fade into the background after a while but their story essentially ends when Ray enters it. The film’s biggest failing is that it burns through plot very quickly which does show how rapid the expansion was but also means that characters introduced later don’t get the chance to really develop. It’s a double edged sword but on the whole the film is a great success thanks to the acting and slick storytelling.