Hugh Jackman dusts off his vocal chords in the romanticised story of P.T. Barnum in Michael Gracey’s The Greatest Showman.

Before I really begin the review let’s address the Elephant in the room. P.T. Barnum is absolutely a historically controversial figure so crafting a story around him where he serves as the hero is arguably a very insensitive thing to do. I’m not saying I disagree with that notion and I suspect those who made the film are banking on the historical details not being known to much of the audience. Whether this film “should” exist or not is a debate worth having though it won’t be had in this review because I’m here to critique the movie that was in front of me without considering the historical context. Anyone reading this who doesn’t know the story I’ve linked the Wikipedia article above to get you started on any research you might want to conduct.

One thing that’s certain about this film is that historical accuracy isn’t a priority. It sets out to be a feel good family friendly holiday musical and for better or worse accomplishes that goal. It starts off as a class divided love story and quickly transitions to the tale of a man with lofty ambitious consistently risking everything he has to achieve his goals. The combination of hard work, big dreams, determination and optimism being what is required to make something of yourself is a classic Hollywood go to for good reason and it’s not badly presented here.

It’s easy to see how Barnum goes from nothing to international acclaim and what he had to do to get there so the story very much works in terms of how its structured. Everything is solid if predictable with the required amount of challenges and successes throughout as Barnum overcomes various obstacles with his dogged determination to meet every setback head on. 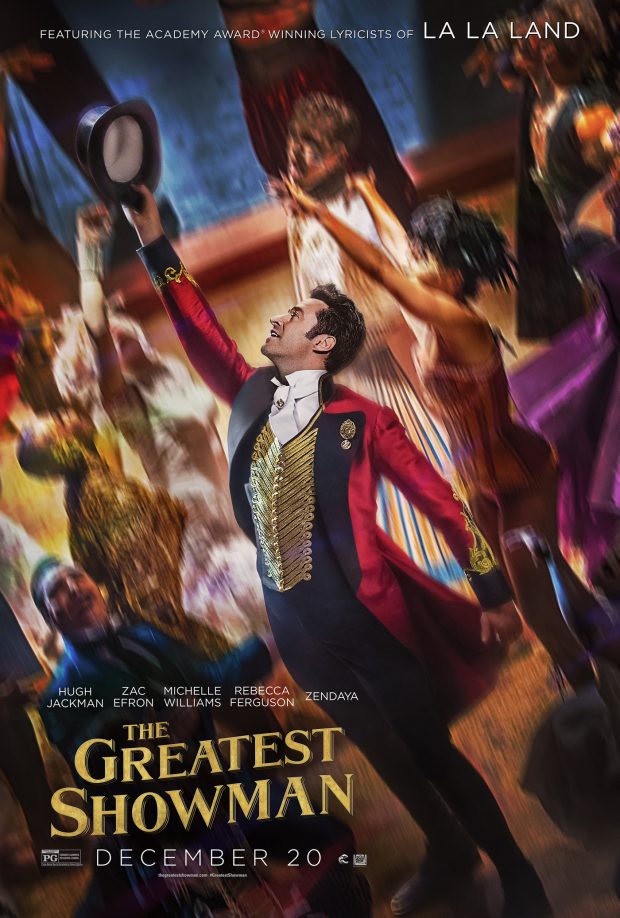 Hugh Jackman is great as Barnum in the same way he’s great in everything. His effortless charisma and presence let him carry the film expertly and it’s clear he can carry a tune which makes him ideally suited to this sort of film. His performance makes Barnum someone worth investing in even in his most selfish moments. The narrative is framed around his character arc of building himself up from nothing and peaking before returning to nothing and realising what’s truly important in his life. It’s simple, effective and well told even if it is completely romanticised.

I found the Barnum character interesting because of the way he was portrayed. From the beginning Jackman plays him with wide eyed idealism that eventually manifests in a selfish streak that has him latching onto the new at the expense of the old. It’s fascinating to see how quickly he discards everything that got him to where he is once he sees a more lucrative opportunity before realising his faults and overcoming them. Is it true to life? Definitely not but the film never pretends that it’s doing that so it works as a story.

The highlights of the film come early on when Barnum pulls together his collection of societal oddities to put on display. Each of them are given a short yet memorable introduction and are woven through the rest of the plot in compelling ways. Many of the individuals aren’t given much in the way of narrative focus but everyone is distinctive and has enough personality to make a mark in some way. Keala Settle as the bearded lady with a powerful voice Lettie Lutz and Sam Humphrey as Tom Thumb make the biggest impressions with Settle serving as a particular highlight leading one of the film’s strongest musical numbers.

Other characters are mixed in their execution. Michelle Williams is serviceable yet underused as Barnum’s wife Charity and James Gordon Bennett (Paul Sparks) fails to live up to the potential as a pseudo antagonist in the form of a disapproving critic.

Zac Efron’s Philip Carlyle does a decent job as the one being groomed by Barnum as his successor and even has a passable forbidden by society love story with Zendaya’s Annie Wheeler who incidentally goes criminally underused considering Zendaya’s ability to both sing and act circles around much of the cast. The love story itself is a half baked attempt at making some kind of statement about the limitations of the times and tie it to attitudes today but it never quite lands.

The film also takes a bizarre detour with Rebecca Ferguson’s Jenny Lind. Her purpose within the story is clear as a representation of Barnum’s obsessive nature and Ferguson is always watchable -even if she is vocally dubbed by Loren Allred- but this plot feels oddly mismatched with the rest of the film.

Naturally a musical lives and dies on its musical numbers and this film has a few greats. The cast are all well suited and the presentation of the songs is first rate. For each number the film sets out to put on a show and definitely manages that even if the songs themselves might not be that memorable. Each of them has a largely modern flavour to them. if you think Moulin Rouge then you won’t be far off. The viewer isn’t left wanting for a musical interlude for too long and they’re mostly satisfying as well as timely when they do arrive.

An uplifting and intensely watchable musical experience. The story is simply laid out and well told with a showstopping leading performance from Hugh Jackman. Each of the supporting cast do a really good job even if Rebecca Ferguson’s role feels oddly distracting and Zendaya is criminally underused. The musical numbers are brilliantly produced even if the songs themselves aren’t necessarily memorable. They’re mostly satisfying as well as timely when they do arrive.