A bodyguard is tasked with protecting a notorious Hitman so that he can be brought safely to testify against a dangerous criminal in Patrick Hughes’ The Hitman’s Bodyguard.

This is one of those films where the plot doesn’t matter in the least. Any story the film has is an excuse for the main actors to bounce off each other and thankfully the film doesn’t pretend that the plot is in any way important. It does feel like the plot awkwardly distracts from the comedic mismatched allies narrative but at least the film doesn’t pretend that it’s anything more than it is.

Ryan Reynolds and Samuel L. Jackson are the unlikely allies in question and they make for an entertaining enough pair. Their shared dialogue is almost entirely made up of wisecracks which works for the most part but really starts to grate after a while. When every conversation is punctuated by some kind of quip it becomes difficult to see the characters as people worth investing in. Their interactions are designed to provoke a laugh from the audience and it all starts to feel like too much considering how relentless the film is with this.

In terms of the performances the film has exactly what you expect. Ryan Reynolds plays the character that you expect Ryan Reynolds to play and Samuel L. Jackson is playing the version of himself that audiences are most familiar with. This isn’t a bad thing as both actors are playing to their strengths and they have enough on screen chemistry to make the banter feel far less mechanical than it might otherwise come across. Two charismatic actors delivering the dialogue really makes the difference and many of the interactions are entertaining because of them. 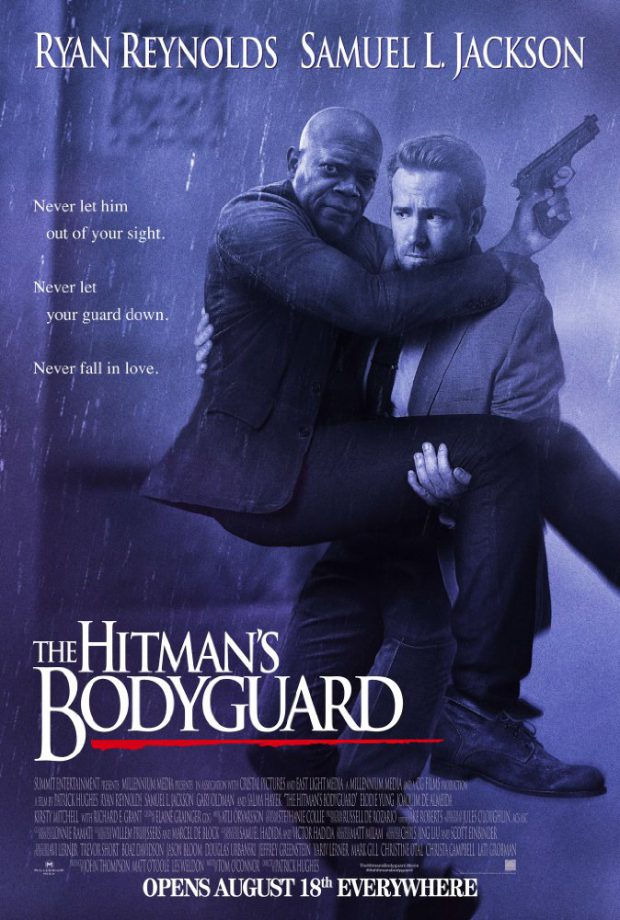 As I mentioned above; the stream of witty banter is relentless and largely predictable. It’s largely aimed at the lowest common denominator which means there isn’t a single joke that could be considered sharp or clever. The relationship between the two leads is definitely well defined but it becomes uninteresting fairly quickly since it is easy to guess what the next line will be or what either of them will do next. The film isn’t nearly as funny as it thinks it is and there’s far too much repetition throughout.

Gary Oldman appears as the master criminal that has to be brought down by the important testimony but I was left wondering why he was in the film at all. His appearance boils down to a very small number of scenes and he brings absolutely nothing to the plot with his appearance. To call it a waste of Gary Oldman’s acting ability would be a understatement. Richard E. Grant similarly suffers in a cameo appearance that adds very little.

The film also does very little with the limited female cast. Elodie Yung plays the love interest to Ryan Reynolds’ character and serves as little more than a trophy he can win for completing his mission. The scenes she appears in only establish her as borderline incompetent as she largely disappears once she hands the job over Reynolds. It’s a waste of an actress who is capable of so much more and the characterisation is incredibly shallow. Salma Hayek plays the wife to Samuel L. Jackson’s character and is very much defined by her short temper and foul mouth. Some of her lines are amusing but her contribution is very one dimensional.

The Hitman’s Bodyguard feels like a long film. There are at least two occasions that feel like a natural end point before the film continues on. It lacks the momentum to stay interesting for the entirety of its run time and the action sequences do little to make up for this since they are largely very dull. A handful are reasonably well executed but it doesn’t make up for the overall sense of boredom the film creates.

A bland experience that tries to coast on the charisma of its lead actors but fails to do so. The story isn’t interesting, a relentless onslaught of lowest common denominator comedy starts to grate very quickly, the film goes on far too long and much of the cast are completely misused. There are a handful of well executed action sequences and Ryan Reynolds paired with Samuel L. Jackson is good value to a point but the positive aspects are nowhere near enough to compensate for the many shortcomings.