Chris McKay gives the LEGO movie franchise its second outing with The LEGO Batman Movie where the blocky Dark Knight builds his way to a safer Gotham City.

The Lego Movie was a pleasant surprise as it could have so easily been a shameless excuse for product placement but the end result was something far better than that. It was funny, heartfelt in all the right places and very cleverly constructed -pun definitely intended- so all eyes were on this film to see if the franchise would become diluted to the point where we all wished it had stayed as a single experience or if it’s possible for that level of creativity to continue.

Will Arnett returns as the LEGO version of Batman with his personality pretty much the same as when we last saw him in The LEGO Movie. He’s arrogant, vain and completely buys into the label as a darkly conflicted superhero. It’s an amplification of the traits we tend to associate with Batman as a character so it’s an easy point of parody.

Easy doesn’t mean that it will automatically be good. Identifying things to poke fun at in pop culture is simple but doing it in a way that comes across as clever, respectful and funny takes a lot of skill. Thankfully this film manages to do all that and more to create something that might actually be the best cinematic Batman movie that we’ve had. I can’t say that with absolute certainty but it certainly numbers among the best. It’s basically a spoof but a lovingly respectful one.

There have been so many versions of Batman in TV and film for decades so there’s a rich history for this film to take on. Surprisingly it references it all from the early movie serials to Batman V. Superman: Dawn of Justice. It’s a lot of ground to cover and the film doesn’t really dwell on any of it. The references are often so quick that they are easy to miss but there’s so much here for people to hit the pause button and pour over the detail in the scenes once this becomes available for home consumption. 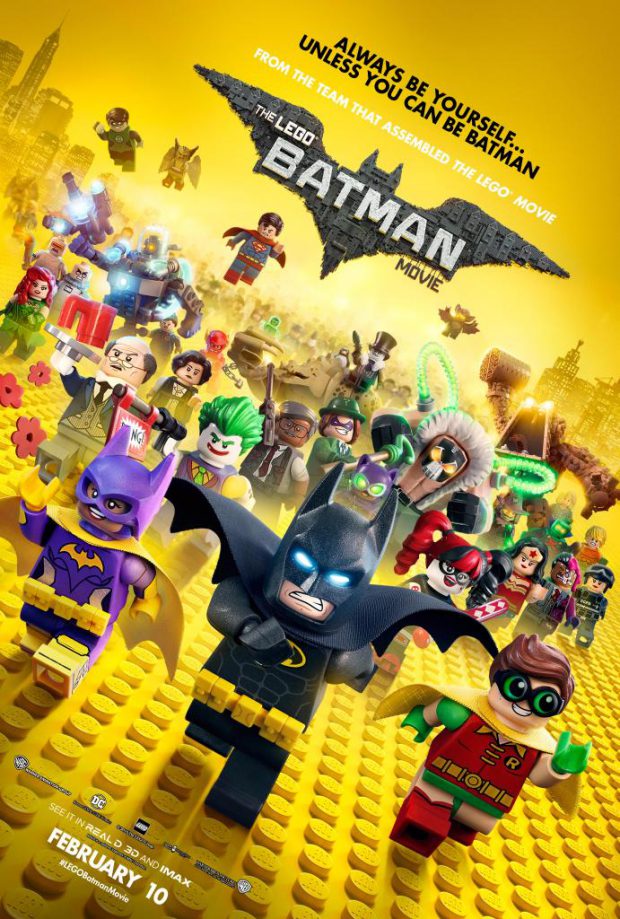 It also manages to be an entertaining film in its own right so people who might not get the references need not worry as they never get in the way of the experience. Sometimes they’re done in such a way that you don’t really need to understand them to laugh at the joke anyway.

Sometimes it can feel like the film is throwing references and jokes at us too rapidly. As I said there are bound to be things in there that I’ve missed which means that some of the jokes don’t have time to land. You may still be processing one before it moves onto the next and it can be hard to keep up. It’s a fairly minor criticism as this film is merciless with the humour. I pretty much laughed from start to finish almost without exception. There are so many gags from subtle to overt that it felt a little like Airplane in how quickly it powers through them. This will please Batman fans of all ages and lovers of comedy in general.

The voice cast are excellent. Will Arnett is perfect as the exaggerated version of the character with his Christian Baleesque Batman voice that he throws everything into. It’s also a good vocal performance as he doesn’t let that define the character. He has vulnerabilities, emotional range and the Bruce Wayne voice is different enough to the Batman persona that it’s clear he was taking performing this character seriously. Will Arnett has always had excellent comic timing and this really benefits him here as he delivers joke after joke without missing a beat. LEGO Batman is a compelling character who is easy to root for while also being someone that can be laughed at. It’s a thin line and the combination of the vocal performance and the writing.

Zach Galifianakis is the latest actor to take on the role of the Joker and he’s an absolute riot. He’s very different to any version we have seen before but suits this film perfectly. Like LEGO Batman he has vulnerabilities and emotional range which helps make him a worthwhile antagonist. I really liked the angle that his main goal was to get Batman admit that he considers the Joker to be his greatest enemy. It’s just ludicrous enough to work and having him feel insecure because Batman doesn’t value him never stops being funny.

Other vocal performances are strong as well with Rosario Dawson doing an impressive turn as Barbara Gordon aka Batgirl and Ralph Fiennes feeling perfectly cast as Alfred. A special mention goes to Doug Benson as Bane. It’s a small role but never stopped being funny for me. There are no problems with any of the voice work here.

The animation is beautiful as well. CGI is used to make it look like LEGO has been manipulated in a stop motion style just like in The LEGO Movie and the novelty hasn’t worn off. It works perfectly and the film is very colourful with great design on the LEGO Gotham City as well as Batman’s various gadgets and vehicles. A lot of work went into this by some very creative people and it’s great to look at. I haven’t even mentioned the song that Batman wrote that plays over an early action sequence. Basically, it’s great!

An excellent movie that may just be the best Batman movie ever released in cinemas. It manages to be creative, funny and respectful of the source material all at the same time. Basically it’s a spoof of every version of Batman on TV or in film and it does a great job throwing in references to please those in the know while being a fun film in its own right. It strikes that difficult balance and keeps the jokes coming relentlessly. Sometimes it feels like there are too many and not enough time to really process them before the next one comes but it never ceases to amuse.

The voice work is excellent with Will Arnett and Zach Galifianakis really impressing as LEGO Batman and LEGO Joker. Everyone else does a great job too. Combine this with a good story as well as stunning animation and you’ve got a great experience that can be enjoyed by everyone.