Terry George’s The Promise tells the story of a young medical student trying to avoid being caught in the genocide of his people during the last days of the Ottoman Empire.

Genocide is always going to be a tricky subject to put to film as it is obviously a very emotive subject. The events depicted in this film are a historical sore spot and are still denied to this day by the Turkish Government. In some respects this is a very brave story to tell as it is highlighting a historical event that many deny even happened.

It’s clear that this film is designed to appeal to as wide an audience as possible. Much of the narrative focuses on a love triangle between Mikael (Oscar Isaac), Ana (Charlotte Le Bon) and Chris (Christian Bale) and there is definitely merit to how this story is handled but it has the problem of being the least interesting thing going on here. Establishing the characters and their motivations to give the audience a reason to invest in them is a great idea but there’s something off about the way this love triangle was handled. Of course a lot of this might have to do with the fact that I personally detest love triangles but I definitely think that there was a more interesting story that could have been focused on.

Oscar Isaac is as engaging a lead as he normally is though he does have a tendency to overact in this film. There’s a scene that’s supposed to be powerful and emotional but the fact that he’s laying it on a bit thick overpowers it. Despite that he does a great job throughout and plays Mikael as a naively idealistic person who just wants to help people and ensure that his people are treated fairly. 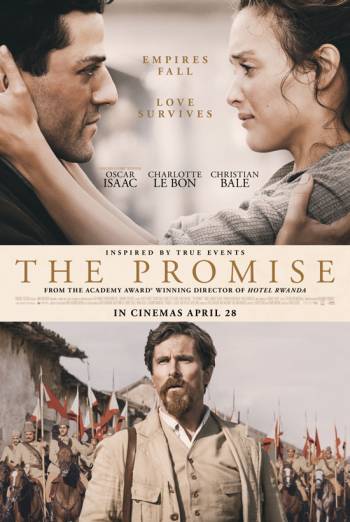 Charlotte Le Bon is good enough but her character doesn’t bring much to the story other than being the focus of the love triangle. It’s a waste of her talents and there definitely should have been more for her character to do than we get here. Despite this she does manage to stand out and plays off Isaac and Bale pretty well.

Christian Bale does a great job with a character who evolves from being an overindulgent drunk to more of a hero forced into action by the genocide he witnesses. His story often plays apart from the main narrative but is no less important when considering the film as a whole. It’s a compelling performance and a character that feels well rounded.

The depiction of the genocide is shocking without appearing gratuitous. Many of the images are haunting to look at but a lot is left to the imagination which definitely makes things worse. One thing the film does well is showing the sheer numbers of Armenians killed. It’s horrifying to contemplate and the viewer is encouraged to imagine the levels of brutality that the dead were subjected to before they were killed.

At times the narrative can feel a little too large which makes some of it difficult to follow. Any scene that focuses on individuals or small groups is really powerful stuff such as the scene where Mikael meets Garin (Tom Hollander in a small cameo), a former circus clown who has a bullet lodged in his cheek as a reminder. More intimate accounts like this capably explore the scope of the persecution the Armenian people faced and more focus on these elements would have helped the film tremendously. Focusing on the larger events is fine but lacks the necessary emotional punch.

An effective and compelling film that explores an untapped historical event. Devoting much of the narrative to a love triangle doesn’t quite work as there are more interesting stories to be told. It does introduce the characters but the focus is entirely in the wrong place. Oscar Isaac, Charlotte Le Bon and Christian Bale all do a good job in this film with Bale being the standout as a character who evolves over the course of the film. The depiction of genocide is horrifying without being gratuitous and focuses more on the sheer numbers of Armenians killed with a lot of the killing being left to the viewer’s imagination. Any focus on more intimate events is where the film is at its strongest but it can feel too wide in scope sometimes as the narrative is a little too large.