The Underworld franchise returns for a fifth instalment with Anna Foerster’s Underworld: Blood Wars where Kate Beckinsale’s Seline continues to make enemies on either side of the Vampire/Lycan conflict.

I’ve always enjoyed the Underworld films on one level or another. They have always been more about style than substance but there’s enough there to hold my interest and the cast seem to invest in what they’re doing for the most part.

This film is very much what you would expect from this franchise so if you weren’t interested in any of the previous entries then this certainly won’t change your mind. There’s something comfortable in knowing exactly what you’re going to get with something like this and the end result is something pretty watchable for the short time it’s on.

As with all films in this series the plot is fairly simple to follow yet needlessly complicated. Seline is on the run after making sure that she can’t be used to find her and is invited back by the Vampire council to train new recruits. It turns out that there is a more nefarious agenda and the plot moves on from there.

Like I said, simple but needlessly complicated but it isn’t designed for the viewer to dwell on. All the plot really does is set the stage for the next action scene and there are plenty of those to enjoy. They’re pretty competently executed overall with some impressive settings, really fast paced choreography and appearing just gruesome enough in some cases to show just how violent fights between Vampires and Werewolves can be.  There are definitely too many action sequences and they do start to blur together after a while. The short running time and speedy nature of the story definitely contributes to that but it doesn’t drag the film down too much. 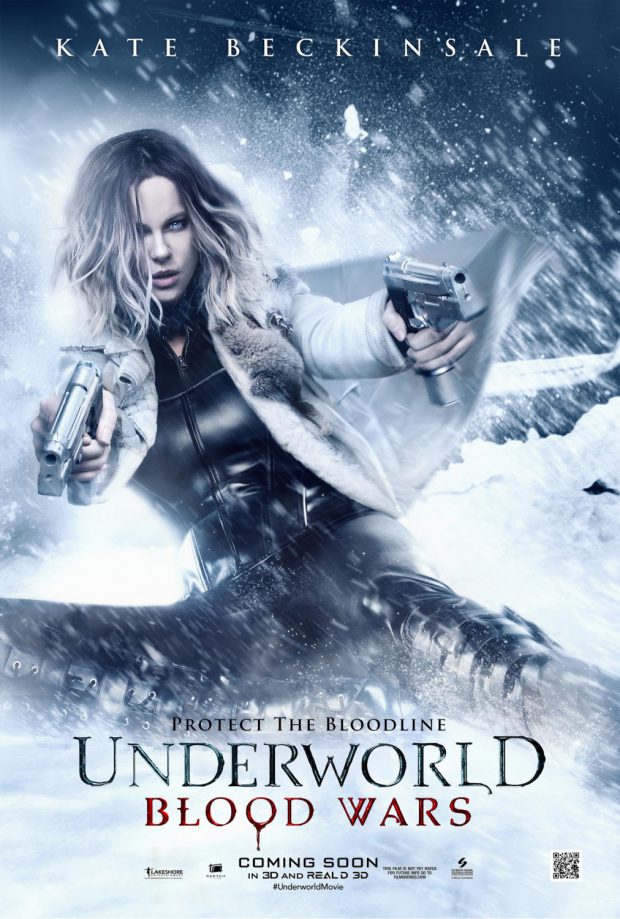 The story itself is fine as it is but there’s a disturbing lack of progress to it as with some of the previous films. It opens with a “previously on” to catch the audience up with what has been going on but this isn’t really necessary as all of the relevant details are given to us through expository dialogue. There are even reminders of what happened earlier in this film towards the end. It seems to get caught up in its own mythology when it really isn’t all that important.

I mentioned that there’s a lack of progress to the story and that’s exactly how it feels. Significant things happen but it’s unclear how they impact the characters or the world this film inhabits. There is far too much expository dialogue that tells us a lot but shows us very little. It starts to become evident towards the end and the credits roll with this whole thing feeling like another small piece of a larger narrative that might never be resolved.

Kate Beckinsale is good value in this film. You might expect the lead to get lazy after this many entries but she seems as committed to the stoic yet passionate Seline as ever. It’s certainly admirable that she shows respect to a character that gained her lots of popularity but I wish she was given far more to do as Seline isn’t written with an awful lot of emotional complexity. It’s implied in her backstory but never comes across in the way she conducts herself.

Other actors are in a similar boat. Charles Dance returns from the previous film and does pretty much what is asked from him but never coming across as phoning it in, Theo James has very little to work with but is capable enough while occupying the co-lead position. His character has some significant revelations but the story never allows them to land properly so they don’t feel as life changing as they should.

The villains are really well done with Tobias Menzies clearly having a blast chewing the scenery as the lead Lycan Marius. A lack of screen time doesn’t really help him but when he’s around he projects the right level of menace and is a fun antagonist. Laura Pulver’s Semira is also marred by a lack of screen time but she’s a fun character as well with her seductive ways and lust for powers making for quite the memorable presence. It’s a shame the villains don’t get more to do in general as they were definitely really entertaining.

Unfortunately the film is let down by this series having a mythology that is -in theory- very rich but goes largely unexplored. Each entry to the franchise adds something else to the mix that could be interesting if given any attention but the style over substance approach means that there isn’t any time to develop this. It’s easy to see what the film is getting at but it constantly stops short when it comes to doing anything with it. Maybe this series will be rebooted as a TV show at some point in the future and this mythology can be explored fully. For now it’s basically connective tissue between the action sequences.

An enjoyable if disposable outing for the Underworld franchise. This won’t change the mind of any naysayers but it’s comforting to get exactly what you expect out of one of these. The plot is easy to follow yet needlessly complicated, the characters are serviceable as is the acting and the action is competently handled. Unfortunately the story is full of exposition that suggests something interesting but never quite gets there and the villains suffer from a lack of screen time despite their entertainment value up to that point. If you liked previous entries in the franchise then you’ll like this one, otherwise stay away.