John Krasinski’s A Quiet Place Part II follows up on the landmark first entry with more trials for the Abbott family to endure while making as little noise as possible.

A Quiet Place stood out because of how it approached storytelling. Without being able to use dialogue to deliver what the audience needed to know, other tools had to be deployed and the end result was a meticulously crafted experience that favoured less conventional ways of conveying information. It stood out and was incredibly memorable as a result. The sequel picks up some of those tools but uses them very differently. It’s fitting that the first film many will see in cinemas after an extended absence is about the importance of being quiet. 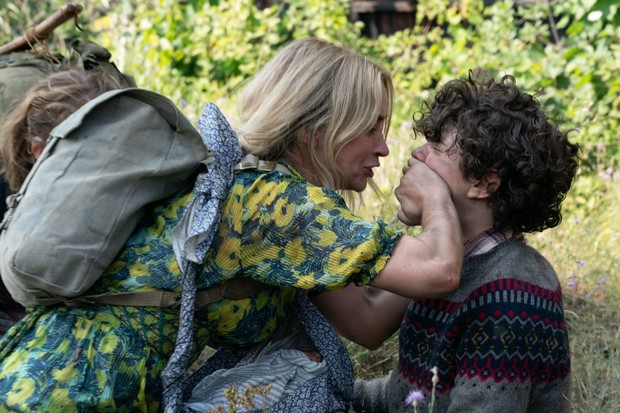 Never forget to be quiet!

The film begins with a flashback to the day the aliens landed on Earth and chronicles the early stages of the attack from the perspective of the Abbott family. John Krasinski’s Lee makes a return for this sequence that is impressively crafted but overall unnecessary. The backstory wasn’t important in the first film and it isn’t important here; nothing about this sequence informs anything that happens later in the film nor does it add anything of substance. It is entertaining by itself and provides a very loud action driven opening ahead of a more deliberate and silent experience but almost immediately proves irrelevant.

As is often the case with sequels there is a focus on expansion. There are more characters, The world expands, situations are different and it’s a lot louder. The slow and meditative pace of the first film is replaced with a more frenetic one and greater urgency in pursuit of a very different objective. Emily Blunt, Millicent Simmonds and Noah Jupe return for a story that picks up immediately after the conclusion of the previous entry and follows their attempts to survive without Lee to guide them as well as far less resources to fall back on. They quickly run into Emmett (Cillian Murphy); an old friend who reluctantly helps them after seeing how desperate they are and things progress from there.

Notably the bulk of the attention is on Millicent Simmonds’ Regan who takes the lead on a binary narrative that teams her up with Emmett. As a pairing there’s not a lot to say about them as their dynamic largely amounts to her being fiercely determined while he scrambles to protect her. Despite that it’s interesting to see how they learn to communicate and excellent use is made of the additional challenges that come with Regan being deaf. It ends up being the source of some impressively tense moments and Simmonds’ performance is routinely excellent no matter what she is attempting to convey.

Splitting the party both works and doesn’t. Largely gone is the intimacy that made the first film so endearing and replacing it is a much larger story that does buckle under its own weight at times. Emily Blunt’s Evelyn and Noah Jupe’s Marcus participate in a subplot that has a tendency to feel undercooked though that intimacy does feature at some key points such as a particularly beautiful moment where Emily Blunt conveys Evelyn’s grief without a single word being spoken. Noah Jupe is also impressive especially when showcasing Marcus’ pain along with his fear. The mother/son moments where Evelyn has to guide her son to navigate a given circumstance also feed into displays of intimacy reminiscent of the first film.

This can become lost among the faster paced and more action driven content to be found in Regan and Emmett’s plot. At times the film feels like it’s uncertain about what it’s trying to be though it’s commendable that it doesn’t simply try to replicate what made the first so memorable. Part of the problem is that it doesn’t replace it with something that could be considered an improvement. The action sequences -aside from the opening- aren’t overly impressive and the expansion of the world the film inhabits isn’t as detailed as it needs to be so there are many reminders of what has been lost rather than gaining something entirely worthwhile. A third outing is strongly suggested by the ending so perhaps as a trilogy it will hang together as a fully cohesive piece. 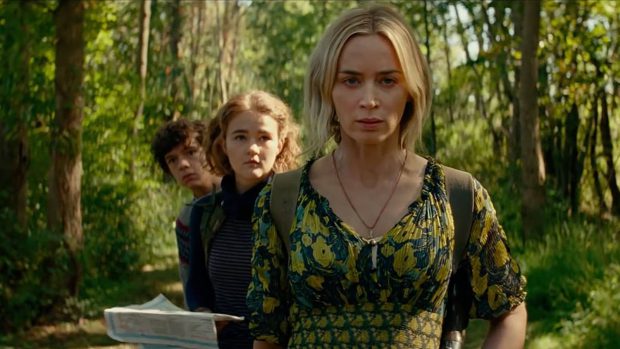 On the move again

A decent sequel that doesn’t rely on replicating what made the first film successful but doesn’t always succeed in offering a suitable alternative. There are some really strong and beautiful moments to be found throughout and Millicent Simmonds’ performance is particularly noteworthy but the more expansive narrative buckles under its own weight at times. Much of the intimacy that made the first film work so well is gone but isn’t replaced with something entirely worthwhile. The action sequences -aside from the opening aren’t overly impressive and the worldbuilding isn’t as detailed as it needs to be. Perhaps the strongly suggested third outing will allow the trilogy to hang together.