A family is forced to live in near total silence to hide from creatures that hunt by sound in John Krasinski’s A Quiet Place.

Right from the off it’s very clear that a lot of thought went into this film. The idea of being inhumanly quiet to survive is just the sort of high concept idea that lends itself to creative storytelling as sound, one of the most significant tools to a filmmaker is limited and the use of it becomes frowned upon in the context of the narrative.

The film takes place in a post apocalyptic landscape where pockets of survivors live in fear of creatures drawn to sound hunting them down and killing them. Very little information is given about what these creatures are or where they came from outside of some newspaper articles that can be seen from time to time. Exposition definitely isn’t something this film is interested in delivering as the narrative is less concerned with the “why” and more concerned with the “how”. What I mean by that is that the backstory isn’t as interesting as how people live in this world and what their day to day existence looks like when making a sound strongly risks certain death.

John Krasinski has crafted a masterclass in visual storytelling with A Quiet Place. The concept doesn’t lend itself well to dialogue with very little of it appearing in the film so almost everything has to be developed through what can be seen on screen. This is handled expertly throughout with visual cues and actions always making it clear what the characters are doing at a given moment and why exactly they are doing it. Framing the story around characters who have survived this world for a long time establishes a strong sense of routine and once it becomes clear that sound is the enemy it’s really interesting to see all of the effort that goes into minimising this as much as possible.

This is an immense challenge for the actors who are unable to emote through dialogue so have to restrict their performance to their physicality. John Krasinski plays the father figure in a surviving family who has built up an intricate defensive system for his family geared towards silence. He does great work with body language and facial expressions to bring across how much he cares about his family with his actions very much doing the talking for him. Emily Blunt is the mother of the family who brings herself across in a similar way and manages to convey a very strong relationship with both her husband and children with very little dialogue. The two children played by Millicent Simmonds and Noah Jupe impress in similar ways and round out the family unit that the film focuses on. 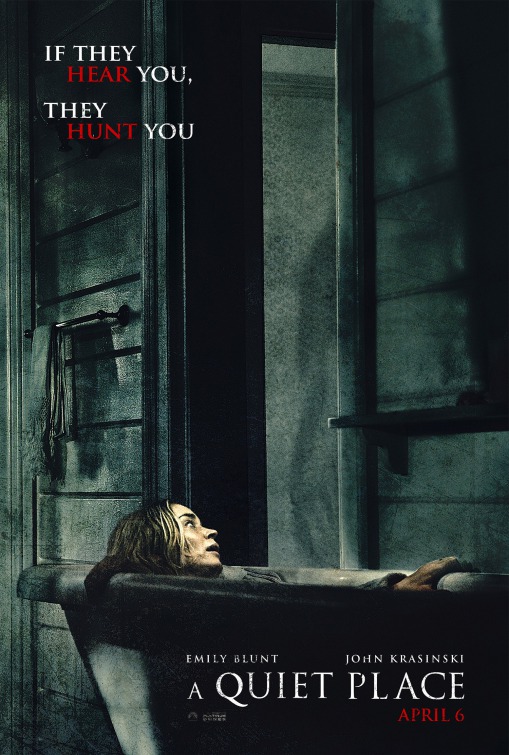 Despite the focus on silence the film isn’t bereft of traditional communication. There is a small amount of dialogue in the film at key points where it is safe to do so. The dialogue itself might not be overly significant in the grand scheme of things but clarifying when it is safe to talk adds to the intricate world building and the words exchanged does deliver some insight into the characters even if it isn’t a great deal. The rest of the time the characters use American Sign Language to communicate with one another which is subtitled for the audience. Use of this is relatively brief and only exists to impart necessary information so the film doesn’t rely on subtitles to tell the story very often.

Sound is used to create tension throughout. It is well established that making a sound might result in death for the characters. This is shown very early on so the fear of being heard is always hanging over the narrative. Any time a sufficiently loud sound is made it is treated very seriously by the characters who clearly fear for their life. The film does a great job of establishing how loud something needs to be for people to be put in danger therefore making the rules of the universe consistent and easy to understand.

Suspense is built in really clever ways at different points. Emily Blunt’s character being heavily pregnant allowing for two distinct problems since childbirth isn’t known to be a quiet process and a newborn baby is one of the worst things to have to deal with when remaining silent is key to survival. There are a handful of sequences designed to be terrifying where the characters have to work to control their fear to prevent being discovered and the use of sound as a way to gradually build the threat level is nothing short of amazing.

Another clever thing about the film is that the daughter character is deaf -played by a real deaf actress- so she has no idea how loud the sounds she makes are which survival a notable challenge for her since she has to constantly think about what might be louder or quieter. Her inability to hear also increases the terror at various points since she is completely unaware when a creature is behind her as she is unable to hear it approach. This isn’t done often but when it is it’s really intense and makes good use of this idea.

Outside of being an expertly crafted horror experience the film also has a strong theme underpinning it. Parenthood as a concept is the central focus with the main thrust of the narrative being about parental responsibility to protect their children and prepare them for the real world. In this film it is shown by Krasinski’s character showing his son how to collect food for the family, literally teaching him how to survive and both parents have taught their kids the rules of the world they live in and what is necessary to survive. Another part of this theme is realising that parents have to step back at some point and let their children use what they have learned to survive on their own. It is all developed through a science fiction lens and creates a relatable foundation for the characters.

I don’t often talk about films in terms of how they are as cinema experiences but this is definitely notable as a lot of the tension comes from just how silent the film is. My personal experience was in a cinema screen where every member of the audience present tried to make as little noise as possible because every sound will be easily identified. It’s no secret that cinema audiences have a tendency to be inconsiderate and this experience is definitely enhanced if everyone watching it remains as quiet as they can. It adds to the immersion and makes the experience more terrifying as a result.

The only drawback that the film has is the design of the creatures. They don’t look bad as such and definitely benefit from some excellent visual effects but there’s something less than striking about them. It was definitely more striking when they were a present but partially off screen threat that was more terrifying because it was unclear what was being dealt with. They are used sparingly and seen even less but I do wish they hadn’t been seen.

A masterclass in tension and visual storytelling that conveys everything it needs to with almost no dialogue. Sound is used expertly to build suspense and manufacture horror with entire sequences built around making as little sound as possible. The world building on display is first rate with meticulous attention to detail establishing how the world works with limited time spent on telling the story of how it came to be. There is also a strong theme on display with the responsibilities of parenthood and what that entails forming a relatable foundation for the characters to explore. The only drawback is that the creature design is less than striking despite some impressive visual effects. They are used sparingly enough and visualised even less than that but not seeing them would definitely have been more effective.

What did you think? Select your rating in the “User Rating” box below