Amma Asante tells the true life story of the marriage between Englishwoman Ruth Williams (Rosamund Pike) and the Prince of Bechuanaland in Africa in A United Kingdom.

As with many films that tell a true story this one tries to be so many things at once without really focusing on anything. There is a lot of ground to cover in this story from Ruth and Seretse Khama’s (David Oyelowo) relationship, the friction between Khama and his uncle, Ruth’s struggle for acceptance in a strange land and the complex political situation that exists as a result of their marriage.

With so much complexity surrounding the events it can be easy to get lost in the detail and that’s exactly what this film does. It deals more with presenting the facts but doesn’t quite dig into the emotion associated with these facts which is completely understandable given the scope of this event. 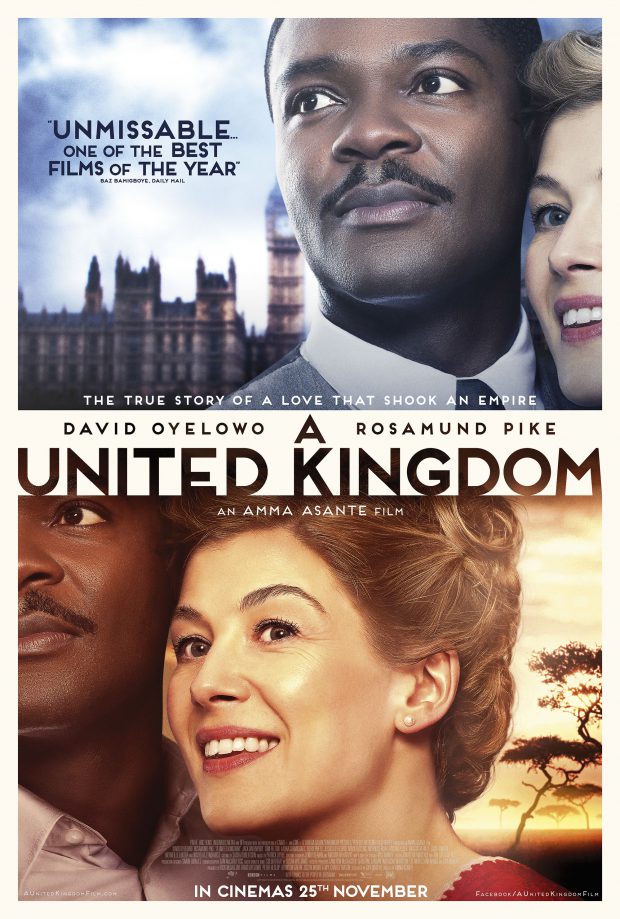 David Oyelowo is excellent as always with lots of opportunity to show what he’s capable of as an actor. He gives many passionate speeches throughout, conveys the pain associated with the lack of acceptance and the difficulties that brings as well as effortlessly showing the love Khama feels for Ruth. Oyelowo is a powerhouse of an actor and roles like this show us why. His performance is go good that more depth is added to the character of Seretse Khama than is present in the script.

Rosamund Pike delivers a solid performance as well but doesn’t really have an awful lot to do. She completely nails the bewildered look that comes with her difficulty in being accepted when she is brought to Africa and she has very good chemistry with Oyelowo but the character occupies the background for much of the running time which makes it difficult for her to have a significant impact. As far as this film goes she exists as something for Khama to find his way back to as well as symbolising the love and devotion he has towards his country.

As I’ve said this film has issues of focus and these become apparent from the opening minutes. Ruth and Khama’s relationship is chronicled from their first meeting to their marriage in a matter of minutes which makes it nearly impossible to invest in it. I understand that there is a much larger story to tell but the political parts of the story were starting before I had a proper sense of who these people were and I felt like I was constantly trying to catch up with the film after that.

Nothing was objectively bad about this but the need to rush through every part of the story made the whole experience jarring. The whole notion of racial and international politics standing in the way of this couple who simply wanted to be together is potentially powerful stuff but the film never gives it the weight it deserves. These events were historic for a variety of reasons but that doesn’t really come across. The performances do a lot of the necessary heavy lifting here but it would have been much better if the film had focused on a particular aspect of these events even if anything chosen would have only been a small piece of a much larger historical puzzle.

One thing it does particularly well is highlight the backwards attitudes of people in power at this time and shines a bright light on the racial prejudice that freely went on in positions of power. There are some great points made about racial equality and how people react to being marginalised when they aren’t doing anything to hurt others. The exploration is very subtle with the presentation of facts that speak for themselves. It would have been so easy for this film to become preachy but it never crosses that line. These issues are powerful on their own are still heavily relevant today considering the modern climate caused by recent events.

A well made and well acted film that suffers from a lack of focus. The events surrounding this historic relationship were complex and the film spends more time trying to make sure it covers them all rather than digging into them in any significant way. Rosamund Pike and David Oyelowo have great chemistry but the script rushes through the major beats of their relationship without allowing any time to invest in it. It was a jarring experience as I always felt as if I was trying to catch up with everything that was going on but the performances by Oyelowo and Pike fill in some of those gaps and add depth that doesn’t really exist in the script.