Disney continues their quest to remake their entire animated back catalogue with Guy Ritchie’s Aladdin.

You would be forgiven for thinking that the live action remakes of animated classics is little more than a cynical cash grab. The quality so far has been fairly high for the most part even if they aren’t bringing anything new to the existing material so it is worth questioning why they’re being remade if the animated version is celebrated as it was and the new version doesn’t offer anything new to justify it’s existence. Cinderella, The Jungle Book, Beauty and the Beast and Dumbo were all successful in their own ways while making varying degrees of changes though most of them -with the exception of Dumbo– stuck very close to the original narrative.

Jasmine likes to roam among her subjects

Aladdin very much follows the pattern of sticking to the plot of the original and this does it no favours. Those who know the original on any level will know that the plot focuses on a young thief named Aladdin (Mena Massoud) living on the streets of the fictional Arabian city/town/country of Agrabah stealing food to survive and keeping one step ahead of the law who literally want his head for his crimes. His luck changes when he finds a magic lamp containing a Genie (Will Smith) who grants him 3 wishes to use pretty much however he wants.

There will be no surprises for anyone who knows the animated version as it follows almost exactly the same narrative beats with few changes. This isn’t necessarily a bad thing as stories are repackaged and retold all the time but the main problem here is that there’s so little effort put into anything presented on screen. In fairness this film was always going to have an uphill battle in terms of being recognised in its own right due to the popularity of the original thanks to Robin Williams’ iconic vocal performance as the Genie. That doesn’t mean that this version was doomed to fail as there were things that could have been done to make it worthwhile in its own right.

The lack of effort can be seen throughout the film with the story told in a more bland and bloated way. A torturously long first act completely outstays its welcome with the extra time failing to deliver any meaningful insight into the characters or their motivations. Aladdin is always a down on his luck thief with a heart of gold and a personal code of honour that he sticks to; this is established well enough in a short period of time and persistently repeated until the point that the story is ready to progress. It is frequently reinforced that there’s no reason to watch this film when the animated version exists as it’s a shorter and far more satisfying experience.

Things do pick up when Will Smith’s Genie is introduced though not by much. As with the original film the Genie offers Aladdin his three wishes and encourages him to put his best foot forward in order to impress Princess Jasmine (Naomi Scott). This translates to the bulk of the Genie persona being reminiscent of Will Smith’s Hitch character in the movie of the same name. It’s not a bad idea on the surface and the best parts of the movie are where Will Smith leans into the “love doctor” aspects of this character but the execution of it is very problematic as these elements are fighting for attention among the constant recreations of moments from the animated film. It would have been a far better experience had the film allowed Will Smith to truly make the Genie his own rather than invite comparisons to the untouchable Robin Williams performance.

The songs are the best example of the lack of willingness to stray from what has come before. For the most part they play out exactly the same except a little worse. The “Prince Ali” sequence is a great example of this as live action doesn’t lend itself to the creativity and scale of what that sequence was. This wouldn’t be a problem if this film delivered a memorable take on it in its own right but that isn’t the case. Similarly, the Genie song “Friend Like Me” plays out more or less as before despite a rap version of this playing over the end credits. There was definite scope to change things up but there doesn’t seem to be any appetite for it. Will Smith’s versions come across like a bad karaoke singer that thinks they’re a good karaoke singer. Sure he’s confident but that doesn’t make it any less painful to watch or listen to. The worst translation is “A Whole New World”; a blurry unclear mess of CGI and green screen that fails to show the wonder of what is being sung about.

Jafar (Marwan Kenzari) is one of the worst villains in recent cinematic memory. He has no charisma and fails to be as menacing as the plot needs him to be. Whether this is a flaw in the acting or the direction is anyone’s guess but he never feels like an immediate threat. In fairness this may have been an attempt to deliver a subtler version of the character so that his villainy wouldn’t be so obvious but this take goes too far the other way to the point that he is never effective.

Visually the film is a mixed bag. Some scenes are brilliantly rendered and many of the establishing shots of Agrabah are really impressive. Many of the interiors are believably ornate and there are some impressive flourishes where the magic is concerned. There’s nothing wrong with the costumes as such but they look very artificial rather than looking as if they belong to a fully realised world. Agrabah feels like a fictional world with nothing beneath the surface which becomes distracting very quickly. I’ve already mentioned the visual problems on the “A Whole New World” sequence because of problematic CGI and this carries into the rest of the film particularly where the Genie is concerned in his default blue form. In general it feels like an expensively produced pantomime which does make it stand out visually though not always in a good way.

The shining spot here is Naomi Scott’s Princess Jasmine. Naomi Scott is a very talented actress and brings this character to life wonderfully despite the limited material she has to work with. Jasmine is where the most changes have happened with her motivation changing from wanting to marry for love rather than obligation to wanting to rule Agrabah but being prevented from doing so because women are forbidden from doing so. Her frustration at being trapped in a role she doesn’t want to be in and the wide eyed curiosity about the world she has never properly experienced comes across really well. Mena Massoud as Aladdin does a fine job but is definitely outshone by his co-star. He doesn’t quite carry the film as well as he needs to but is likeable enough in the lead role. There’s a real sense that he’s trying and that’s more than can be said about most of the people involved with this. 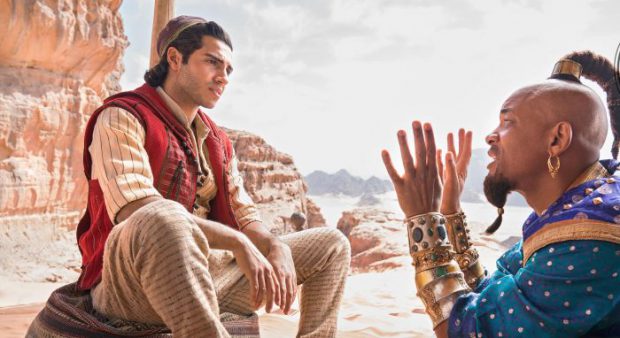 Watch out for the fine print on those wishes!

a charmless, passionless chore bereft of energy and originality that fails to justify its own existence. There is no reason to watch this version when the animated original already exists as it does broadly the same things except worse and has a longer running time. The lack of originality shows itself best in the songs with no attempt to deliver a different take on them while failing to replicate the original creativity and scale. Will Smith’s Genie works periodically when Will Smith tries to do something different with the character but such moments are few and far between with most of his screen time serving as a reminder of how untouchable the Robin Williams performance is. Visually the film is mixed with Agrabah looking great but the CGI being mostly bad. In general it looks like an expensively produced pantomime. The version of Jafar in this version is one of the worst cinematic villains in recent memory, failing to project any sense of threat or menace. Naomi Scott’s Princess Jasmine is the best thing in the film with a notable change in her motivations and an excellent performance from Naomi Scott. NAME as Aladdin does a fine job but doesn’t quite carry the film despite being likeable in the lead role. There’s a real sense that he’s trying and that’s more than can be said about most of the people involved with this.