All the Money in the World

Ridley Scott tells the true life tail of the kidnapping of John Paul Getty III and the drama that ensued when a ransom demand was issues to his billionaire grandfather in All the Money in the World.

I’ll start by addressing the production issues that this film had. Ridley Scott was under a tight deadline when he started shooting as cameras only started rolling last Spring. The whole thing was made more challenging by the last minute replacement of Kevin Spacey with Christopher Plummer due to the allegations against Kevin Spacey. I mention this now because it’s important to make clear that none of this has any discernible effect on the finished product. Unless you happen to be looking for some awkward looking compositing or other signs of things being cobbled together at the last minute you would never know there had been problems. Credit must be given to Ridley Scott for rolling with the punches and delivering the product he did.

Christopher Plummer replaces Kevin Spacey as the elder John Paul Getty; a billionaire oil tycoon who is obsessed with making -and keeping- money. He’s an eccentric billionaire who doesn’t like to spend money and places value in things more than people. He often waxes lyrical about what it means to be wealthy as well as his reasons for keeping people at arms length. There’s a coldness and deep conviction to the performance that suggests Getty fully subscribes to his own values and won’t compromise on them. Christopher Plummer is great in the role and I couldn’t really imagine someone else playing it. He projects the pride, experience and stubbornness wonderfully with the benefit of a lot of years behind him to make his physicality in the role believable. Plummer crafts a deep performance with moments of compassion offsetting the unsympathetic businesslike approach to dealing with people. 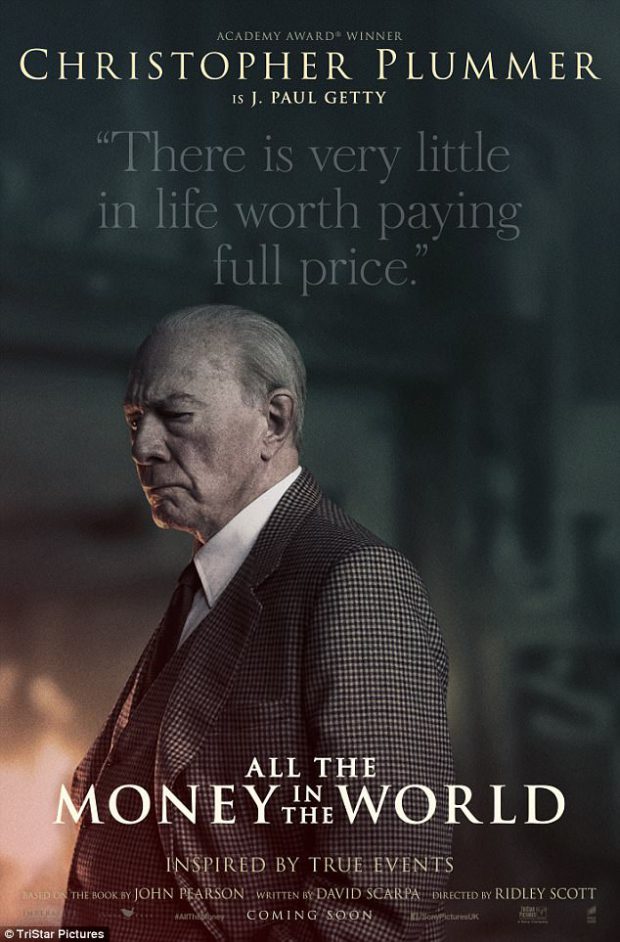 The story focuses on the kidnapping of Getty’s grandson, John Paul Getty III (Charlie Plummer -no relation to the actor playing his grandfather-) and the ransom demand for his safe return. The elder Getty refused to pay the ransom because he doesn’t believe that anything is worth paying full price for and doesn’t want to cave to the demands because that would likely result in other forms of extortion. It’s a cold point but a well thought out one from his point of view.

Getty is very much the obstacle that needs to be overcome rather than the actual kidnapping itself. The solution to the problem is clear so the film is more about Getty’s refusal to part with his money and the knock on effect this has on others. The focal point of this plot is Michelle Williams’ Gail who constantly petitions him to part with the cash necessary to free her son. Michelle Williams is excellent in this role and consistently carries the film with a great deal of strength as well as believable vulnerability. The movement of the story is punctuated by her heightening stress and sense of desperation which keeps the tension rising throughout.

Mark Wahlberg plays Getty’s employee Fletcher Chase. He’s the man Getty puts in charge of getting his grandson back as cheaply as possible no matter what rules have to be bent. The best I can say about Wahlberg’s performance is that it’s fine but nothing spectacular. He delivers the performance expected of Mark Wahlberg which feels at odds with the overall setup of this film. It isn’t that he’s bad but he doesn’t quite fit.

The film also takes some considerable missteps throughout. Nothing about the kidnapping plot stands out to any great degree beyond the performances of the actors involved. Anytime the film cuts to you younger Getty things grind to a halt and these scenes in particular come across as increasingly repetitive to the point that they fail to say anything new about the situation very quickly.

It’s also far too long as an experience partly due to the repetitive nature of many of the scenes. There are several scenes that could obviously be cut entirely to provide a tighter and more streamlined experience overall.

A solid if unremarkable outing that appears seamless despite behind the scenes troubles. Christopher Plummer and Michelle Williams carry the film wonderfully with standout performances and Mark Wahlberg doesn’t do anything wrong as such though feels at odds with the rest of the setup. Unfortunately the film suffers with increasing repetition and an overall sense that it’s far too long considering what it delivers. A lot could have been cut to provide a tighter and more streamlined experience.