Robert Zemeckis brings us Allied; part World War II espionage thriller and part romance when a couple on a deep cover mission fall in love and decide to start a family once they accomplish their task.

There’s something very old fashioned about this film and I mean this in a good way. Brad Pitt’s Max Vatan is definitely in the mould of old school movie stars and this film initially paints him as a simple man who happens to be traditionally heroic. His missions are carried out with grace and skill with no real work needed to convince the audience that he is up to the task. Pitt can play this sort of character in his sleep and his natural charisma makes Max incredibly likeable from his introduction.

His partner Marianne Beausejour (Marion Cotillard) adds contrast to the old fashioned nature of Max and this also counts in the film’s favour. Marion Cotillard crafts a wonderfully complex character in Marianne from her natural ability to lie convincingly to her effortless seductive nature that constantly tempts Max from when they meet. There’s an eerie sense that she might be too good at her job and initially she seems like someone that shouldn’t entirely be trusted

This really aids the second half of the film where her loyalties are brought into question as it makes it believable that she isn’t being entirely honest despite how genuine her marriage to Max seems to be. It’s a shame that the trailer for this film spoils the fact that she is believed to be an enemy spy in the second half as it would have been an effective twist otherwise. I was fortunate enough not to see the trailer but many won’t be in the same boat. 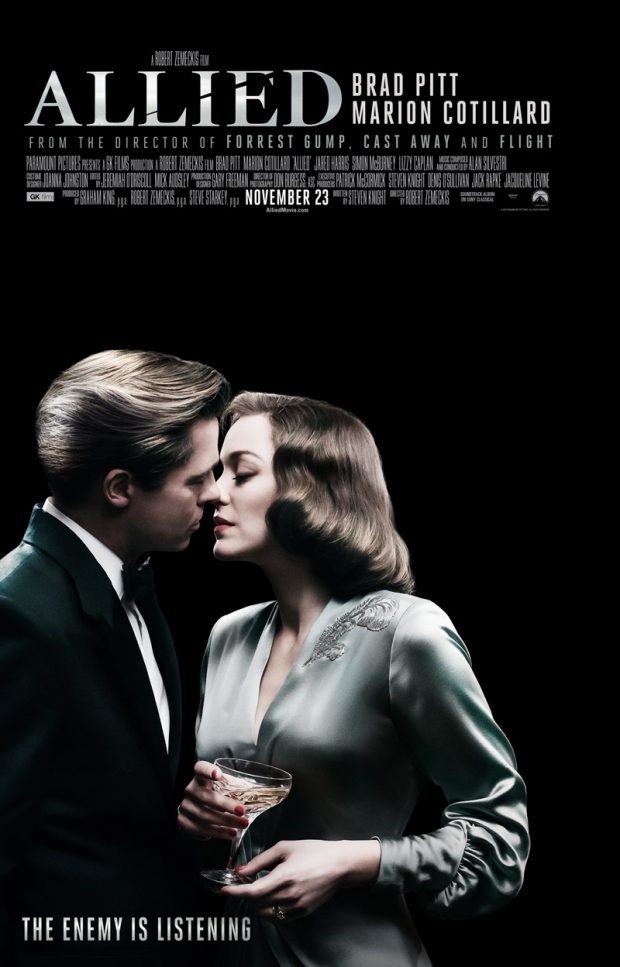 Having said that, the trailer doesn’t really affect the merits of how this comes across in the film and it feels natural enough. The structure helps this with roughly half of the film focusing on the assassination mission and the other half being about Max’s suspicion and investigation.

The two halves are both a help and a hinderance. On one level they allow for a distinct throughline from the beginning of their relationship to the ensuing investigation but on another it makes both parts of the story feel somewhat underdeveloped. The assassination mission could easily have been a compelling film in its own right but it would likely have ended with them deciding to get married and the assumed “happily ever after” once the credits roll. Instead we get to see what happens after that when two spied decide to settle down and that’s interesting on its own.

Unfortunately the assassination mission feels somewhat rushed. I found the particulars of the cover story interesting as information was provided about local customs as well as the observations Marianne has made about the people who live in Casablanca. It was also a visually interesting place to be and there was a lot of tension as their cover was constantly at risk of being blown. There wasn’t really enough time to establish the characters as well as their growing attraction for one another so the marriage comes across as more necessary to move the plot along than a natural progression for these two characters.

Similarly the second half doesn’t quite have the time to establish what married life is like for them and there could have been a lot more made of Max marinating in being suspicious of his wife. We see his perspective as he suspects that everything she does and says is a lie but there wasn’t enough of this to make it come across fully. With more time this part of the story could have been insanely tense before coming to a head one way or another. There’s plenty of tension in these scenes and seeing how Max goes about investigating his wife without her or her superiors knowing is expertly handled.

An enjoyable experience that sometimes feels like it was two films combined into one which means that both halves are rushed in their own way. The first half could have been a compelling spy thriller in its own right with an intricate cover story as well as the growing attraction between the two characters but there isn’t really enough time to establish this fully.

The second half has a similar problem with very little room to play with Max being suspicious of his wife. All of what we see is good but there could easily have been a lot more of this. The performances by Brad Pitt and Marion Cotillard fill in some of the gaps but can’t make up for all of them.