In 2017 the Edinburgh International Film Festival celebrates its seventieth year, and on a cold clear evening in November, they kicked off their run up to this notable milestone with a Gala Screening of Ewan McGregor’s directorial debut American Pastoral. Having managed to bag myself a ticket, I settled down amongst Edinburgh’s great and good to see the fruits of Mr McGregor stepping behind the camera for the first time.

American Pastoral has been in the works for a while, McGregor (Trainspotting, Our Kind of Traitor) having signed on to play the lead, Seymour “Swede” Levov, several years ago, but it’s not been a smooth path to the big screen. Based on the successful 1997 Philip Roth novel, the film’s troubled pre-production was what led to McGregor stepping up to direct in the first place. After the project lost its director close to principle photography, and with his wife telling him to go for it and offer his services, McGregor got his shot at the big chair. As it turns out, this was a great decision all round, as the film, although not an easy watch, is a fine debut, sparkling with some real promise for any future directorial endeavours that he may wish to take on.

The story of “the Swede” is told in flashback, and follows him as he turns from the all-American high-school hero, into a young man as he introducing his sweetheart, the woman he plans to marry, to his somewhat overbearing father, played to perfection by Peter Riegert (Local Hero, The Mask), who delivers moments of pure dead-pan comedy joy that provide islands of respite in this very dark ocean of a story. This first meeting of father and fiancé is complicated by Dawn, a stunning Jennifer Connelly (Noah, A Beautiful Mind) on fine form, being a good Catholic girl, which is not taken well by the straight-laced Jewish businessman and head of the family. Dawn managed to win him over, and for a while the young couple are happy, and have a daughter whom they dote on. 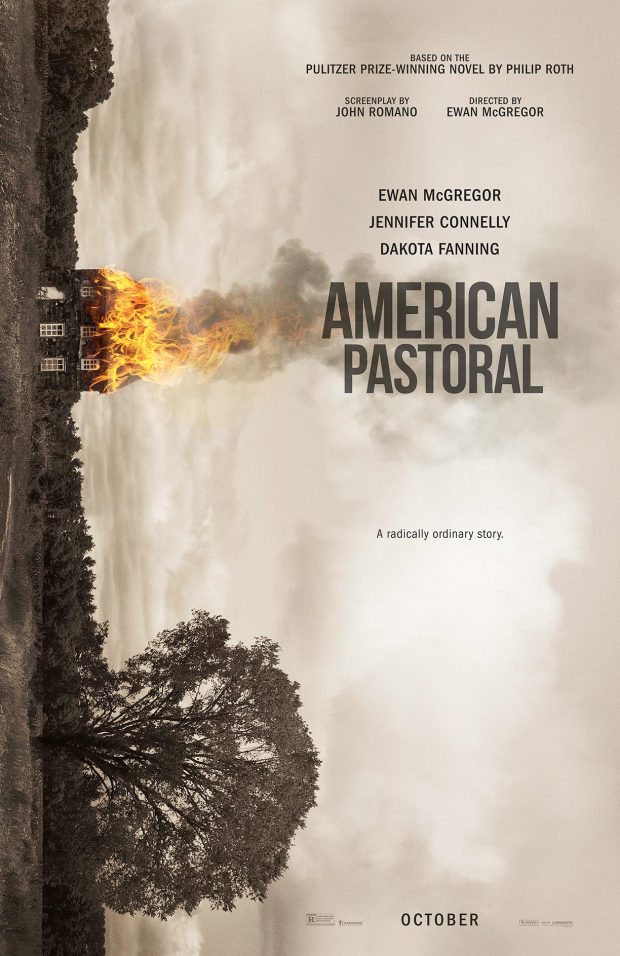 This is when the story takes its turn to the darker side of life. Painted against the backdrop of the civil unrest of the 1960’s, with the Civil Rights Movement, and protests against the Vietnam War, their young daughter, Merry, grows up an angry and troubled child. By the time she reaches her teenage years, in spite of the loving home her parents provided, and without them putting a parental step wrong, her anger boils over and she starts to socialise with radical groups, and it seems that she brings the unrest to the small American town she calls home when the local Post Office is bombed, and she disappears. From here the story is set as the authorities are convinced the bombing was perpetrated by Merry, and her parents, especially her father, convinced that she is innocent or was coerced.

McGregor, both as a actor and director, does a wonderful job with the material, instilling the Swede with a sense of desperation and longing as he does everything he can to find and help his daughter. The story spans years, and no matter the obstacles put in his way, the image of a good man just trying to do what he thinks is right leaps from the screen.  Add to this the breathtaking job done by the prosthetics team as all the characters age so perfectly and realistically as the film progresses that it is almost unsettling. This goes for Connelly and Riegert as well, and with their undoubted acting talents, the overall effect is worth seeing. I must also mention Dakota Fanning (War of the Worlds, Coraline), who plays Merry from her teens onwards, as she adds an unsettling presence to every scene she is in, raging against the world, to only end up being beaten down by it. Her performance towards the end of movie, when added to the belief instilled in the Swede, is almost heartbreaking.

The genuinely interesting thing about the story is that it is only the Swede that’s a genuinely sympathetic character. It’s because of this that the film comes across as a character study of the systematic destruction of one good man by all around him. There may be reasons for the supporting characters motivations, and they may even be good ones, but the overriding feeling you leave the cinema with is of the universe conspiring to break and punish a man who has done no wrong, and who refuses to fold.

That being said, there are definite weak points to the movie. Not only is it very bleak, the pacing is a bit off too, and can feel self-involved at times. At our screening we were lucky enough to have a Q&A with McGregor after the film, and so learned of the process he went through to prepare his cast for each scene, which added greatly to the enjoyment of the evening. However, without this insight, some scenes would feel very staid, and stilted, as they are directed in a style more fitting to the theatre, meaning lines are always complete, no-one talks over one another, and everyone has perfect annunciation, which feels a little unnatural when you’re not aware of the process.

I feel I must lastly mention a couple of technical details that really added to the experience. Martin Ruhe was the Director of Photography, and a few of his framed shots are a joy to behold, and almost worth the price of admission on their own. Also the McGregor’s choices on the sound editing, from Alexandre Desplat’s score, to the silence in one particularly tense scene add beautifully to the story that is being told.

American Pastoral is a disturbing, but worthwhile watch for a debut director. McGregor himself admitted he lucked out with the cast and story having already been in place, but that is somewhat unkind. He shows us enough here that we should expect more from him in future projects, and the film has enough charm to it that it is deserving of a watch on its own merits. It is quite heavy going, and really will not be to everyone’s tastes, but the cast is strong, and the story compelling. If you are looking for something a bit more challenging than your usual fare, American Pastoral is worth some of your time, and ideally you should look at it with a kind eye, as it’s been made with some real love, and tells a story of a time many of us know nothing about.