James Wan’s Aquaman follows on from Jason Momoa’s full introduction of the character in 2017’s Justice League to flesh him out with his own adventure.

Nobody knows if there’s such a thing as a DC Extended Universe any more but that isn’t stopping Warner Brothers making films featuring those characters. Aquaman was already well into production by the time plans started to change following the less than stellar performance of Justice League which means that it gets to be released in the least altered state possible.

The story is all about Arthur Curry aka Aquaman (Jason Momoa) learning about his heritage and his place in the world. He’s a child of two races; a human father (Temuera Morrison) and a Queen from the undersea Kingdom of Atlantis (Nicole Kidman). Being the son of a Queen makes him a legitimate heir to the Kingdom of Atlantis and a contender for the throne whether he wants it or not. From here it’s a fairly standard heroes journey as he explores his potential and overcomes various trials to prove himself worthy of his birthright.

There is a lot to cover in this film with a great deal of mythology, character history, Atlantean politics, environmentalism and a variety of other topics. Despite the volume of content the film never feels overly bogged down in what it has to put across. Arthur being the audience surrogate means that he’s in place to ask the necessary questions that flesh out how the world that is unfamiliar to him works. It’s a common narrative device but it’s commonly used because it acts as an organic way to have information be fed to the audience without seeming clumsy in its delivery. The film does sometimes fall into the trap of characters explaining things they should already know to each other but such instances are fairly infrequent though do stand out when they appear.

The plot may not be what you would expect from a film like this but that works in its favour. Part of it resembles Black Panther in terms of exploring an entire world that exists outside of ours and the rest is comparable to an Indiana Jones story focused on solving ancient puzzles in various scenic locations to find a legendary artefact. Both elements fit together nicely because they are both informed by Arthur’s character journey so the focus is always on what the plot means to him at any given moment.  The execution of this isn’t always competent as there are significant pacing issues in places and conversations are cut off by explosions so frequently that it becomes a joke.

Arthur is a compelling character performed really well. Jason Momoa has charisma to burn and brings a rustic charm to Arthur Curry that makes him a really likeable lead. His physical presence easily makes his power level believable as well. Momoa plays Arthur with a clearly manufactured tough outer shell shielding him from feelings of abandonment and a lack of belonging. He clearly feels that he’s meant for more than what his life has brought him as the film begins but has no idea what it is so spends his time helping people at random hoping something will eventually click. Momoa’s performance helps set the tone for the film as something that doesn’t take itself too seriously and knows how to poke fun at itself. It’s the right approach given the subject matter which makes Arthur feel like he belong to the story being told around him.

It is established that he has some idea of where he came from as he received training from Vulko (Willem Defoe) who taught him about the abilities he has as an Atlantean so he doesn’t have to learn everything from scratch but he has enough distance from his Atlantean side to feel that there’s something missing. Outside of interacting with his father we see no tangible connection to the Human world so his arc is based on a desire to gain a sense of belonging even if he’s reluctant to admit it early on. 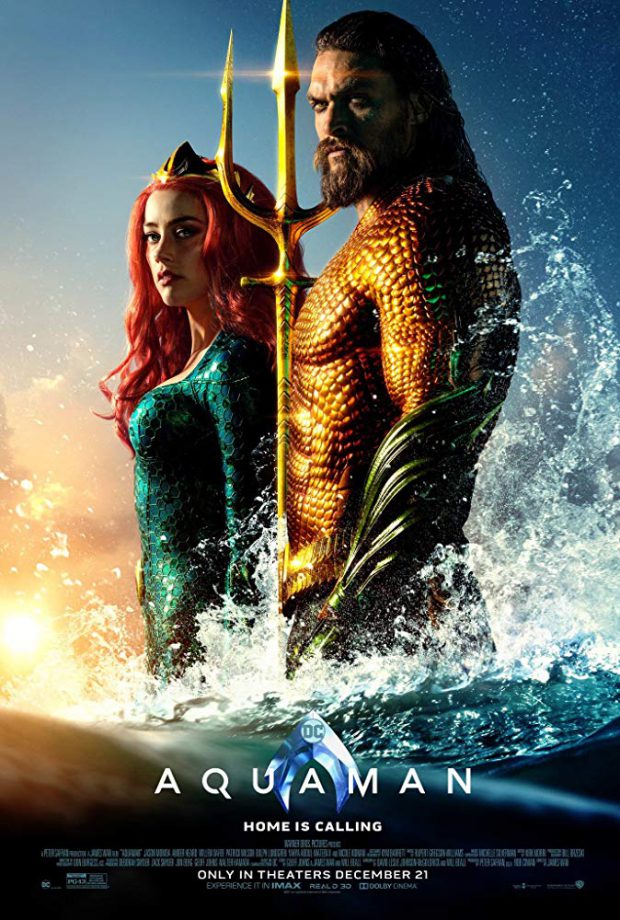 Arthur’s main guide to the ways of Atlantis is Mera (Amber Heard); a princess concerned enough about the current political situation to want it changed. She sees Arthur as the best candidate to bring about that change as the Atlantean people will recognise him as a legitimate ruler because of his mother. She takes him on a tour of Atlantis and its culture while explaining how things work. There’s a strong hint that she feels trapped by her position in Atlantean society and is looking for a way to gain some freedom from the expectations other have of her.

Mera has a significant role in the film and Amber Heard plays it well. The chemistry between her and Jason Momoa makes for fun viewing and Mera’s arc being around her desire to have more agency within her own life allows her to have a great deal of it within the context of the story. She also isn’t immune to being more than a little stuck up and misguided shown through her lack of willingness to see the Human world as being anything more than the negative propaganda she has been fed. Part of the film focuses on her learning that there’s a beautiful and varied world on the surface far beyond the limited perception she has. One of the strongest scene in the film has her explore a quaint fishing village where she gets to see a more peaceful side of the surface world.

Patrick Wilson’s King Orm is the closest thing to a central antagonist this film has. He’s the villain in the sense that Arthur has to defeat him to claim the throne but there’s a suggestion of greater complexity to Orme as a character. Unfortunately the plot doesn’t spend a lot of time on him but there’s a sense that he’s really insecure because people are constantly challenging his authority. He’s acutely aware of the fact that the people he rules have little confidence in his ability to lead them so overcompensates for that with a violent attitude and a lack of flexibility. There was a missed opportunity to fully explore the connection between them with them being brothers who have never met. Arthur mentions knowing about him and there’s a suggestion of regret that they don’t have a relationship but the film fails to do anything with it.

There is a secondary antagonist in Yahya Abdul-Mateen II’s Manta; a character that could have been cut because he only serves to bloat an already busy movie. There’s nothing wrong with the idea of this character and visually he’s really cool but he serves little purpose other than being a threat for a portion of the film where his origin demanded more depth -pun intended- than that.

In general the film struggles with developing relationships in any meaningful ways. Vulko is supposed to be Arthur’s mentor and Arthur clearly holds him in high regard but most of their interactions amount to little more than Vulko explaining things to him. It never feels like any more than that when it should be a rich and well developed connection considering Vulko was Arthur’s sole connection to his people.

Arthur’s relationship with his father doesn’t receive a lot of attention though it really doesn’t need much as it feels rich and lived in all on its own. Temuera Morrison does a lot with a little and creates a really engaging character in his brief appearance. The connection he has with Kidman’s Queen Atlanna works well enough to start things off.

For the most part the action is competently executed with good use of Momoa’s physicality and the extra abilities that Mera has at her disposal. The climax is another one overblown DC action sequence with far too many moving parts to be coherent. It’s one of the better examples but there’s far too much going on though it is a lot of fun seeing the various undersea races with their weaponised sea creatures fighting it out. The hand to hand combat between Arthur and Orme is well choreographed as well but all told it’s a little too messy though there’s no denying the creativity on display.

A fun and engaging entry into the DC canon that makes great use of Jason Momoa’s obvious charisma and delivers some really creative visuals. The story is made up of two distinct parts that fit together fairly well for the most part even if the execution isn’t always as strong as it could be. Jason Momoa is a great lead and Amber Heard capably matches him as Mera; together they have a fun dynamic and a great deal of chemistry. Some of the other relationships needed a lot of work and barely serve their purpose within the plot. There was a missed opportunity to have a deep and complex connection between Arthur and his half brother King Orm. Manta is a fairly weak secondary antagonist that could have been cut entirely. Visually the film is really creative and a lot of the action is impressive but the climax is far too busy to be appreciated in its entirety. Despite its flaws this is a fun watch and a step in the right direction for future DC films.