A man claiming to be a hero from another dimension becomes a case study for a wannabe journalist in Adam Egypt Mortimer’s Archenemy.

You could be forgiven for assuming that we’re at the point where there isn’t much that can be done with the superhero concept in terms of bringing something people haven’t seen before. In many ways that’s true but Archenemy makes a real attempt to deliver a subversive take on something viewers know so well. 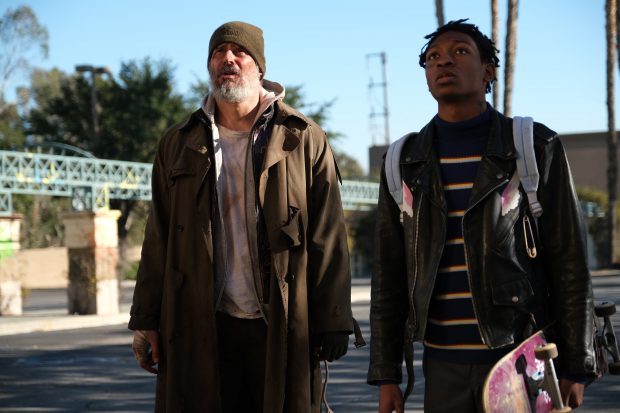 Max Fist (Joe Manganiello) is a homeless, constantly drunk drug abuser who spends his time being completely self destructive while telling anyone within earshot a grand tale of heroics, epic battles and other dimensions. The key question for much of the running time is whether he’s a delusional madman or telling the truth and the film is at its most fun when playing with that question. Joe Manganiello’s performance is first rate. He projects a believable world weariness with plenty of conviction behind his works to make them being true a very real possibility. This is backed up by much of the film framing him as the point of view characters with the world building starting from his perspective. Max’ stories are punctuated by stunning and creative animated visuals to create a contrast between the world he may have come from and the one he now lives in.

Worldbuilding in general is something this film does really well. The aforementioned animations paint a vibrant and distinct picture of the world Max claims to be from whereas the one he’s forced to live is bleak, unpleasant and unforgiving. Regardless of whether he’s telling the truth it’s plain to see why he would hate being where he is and what prompts his self destructive behaviour.

Max’ fortune appears to change when he meets Hamster (Skylan Brooks); an aspiring journalist desperate for a story that will get him started on the road to success in his chosen career. He laps up every word Max has to say and crafts a campaign geared around gaining clicks in order to boost his own notoriety using what he’s told. It’s very much a quid pro quo situation as Max gets some external validation from someone who doesn’t see him as nothing more than a a dangerous madman and Hamster has a unique story to tell that generate buzz by how ludicrous it seems. Their interactions make for fun viewing and Skylan Brooks delivers a strong performance that both compliments and contrasts Manganiello’s. There’s an attempt to promote the idea that a good lie is easier to believe in the truth and that a story is worthwhile by itself if it entertains even if it isn’t true though it isn’t something that is explored as strongly as it should be. Lip service is paid to how social media can be used to influence and how easy it can be for someone to rise from being completely unknown to widespread popularity practically overnight but the movie has nothing to say about it beyond the fact that it’s possible which ends up feeling like a missed opportunity rather than a profound commentary on the modern world.

This isn’t helped when further confusion is added through Hamster’s drug pushing sister Indigo (Zolee Griggs). She’s a well written and acted character but the gang plot that also adds in Glenn Howerton’s underwhelming villain known only as The Manager feels at odds with other things the film is trying to do and only seems to exist to provide an excuse for the well directed action sequences to take place. Paul Scheer’s Krieg; a truly insane drug dealer is always great to watch but criminally underused in favour of less interesting elements.

After a confident start the film starts to meander when it becomes less sure about what it wants to be. Starting off as a subversive take on superheroes with a really cynical backdrop and ambiguity around what the truth is was great but drifting away from that down the road of drugs and gangs diverts the focus uncomfortably. It answers questions that are better left unanswered and fails to capitalise on much of its early promise. 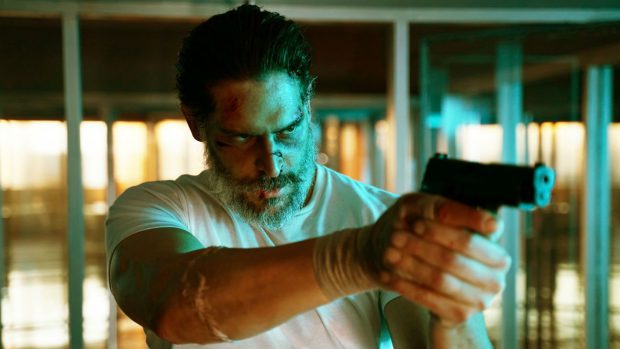 Cleaned up and ready for action

Archenemy is at its best when playing with the ambiguity of Max Fist’s story, exploring his cycle of nihilism and building the world out from how he perceives it. The film suffers a lot when he pulls away from that to tell a story about drug dealers that connects to his origins but it’s very watchable thanks to Joe Manganiello’s excellent performance, strong character work and an impressive display of worldbuilding.

Archenemy can be purchased through Altitude Film.