Army of the Dead

A team is put together to perform a heist in the middle of Zombie infested Las Vegas in Zack Snyder’s Army of the Dead.

You’d be forgiven for asking if anything remotely interesting can be done with Zombies at this point. The film and TV landscape is saturated with them and much of it is along similar lines. Zack Snyder directed a noteworthy entry into the mix in his 2004 remake of Dawn of the Dead and now he’s back with his own story looking to put a stamp all his own on a heavily diluted genre. 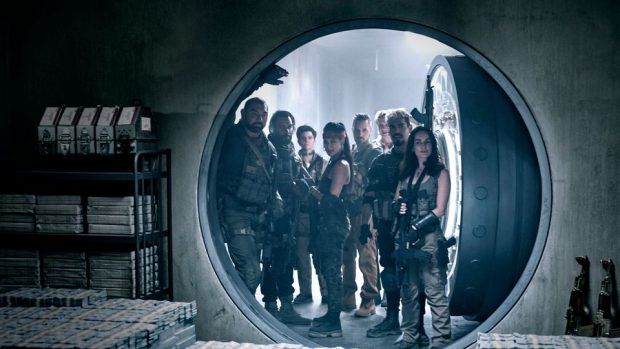 It’s all about the money

Combining Zombies with a heist movie is interesting in theory. You have the tropes of pulling off a nigh impossible heist with Zombies as an added complication which could allow for creative mixing and matching of the two to produce something unique. In practice the two are mostly separated with the Zombies acting as a barrier that keeps the team from carrying out the heist but rarely actually complicating the motions of that plot in any meaningful way. There are moments where the two interact such as using a Zombie to test for any traps designed to keep the unauthorised from approaching the safe but for the most part they are two separate considerations that run in parallel without really mixing.

No wheels are reinvented here when it comes to the heist or the Zombies. For the heist there’s a team of people with the required skills to do a specific part of it, a plan, a ticking clock and a clear indication of what failure will mean. When it comes to the Zombie plot there’s the expected Post Apocalyptic imagery, hordes of the undead and the risk of one bite spelling the end for whoever is on the receiving end. Without finding a way to merge the two ideas the film struggles to justify itself in terms of what the overall purpose is which drags the story down significantly.

The characters are another issue. As is the case with many action movies the people involved are broadly drawn with one major defining trait that audiences can latch onto. Dave Bautista’s Scott Ward is the professional tough guy haunted by mistakes he has made, Marianne Peters (Tig Notaro) is the sarcastic helicopter pilot, Dieter (Matthias Schweighöfer) is the quirky safecracker and so on. None of the characters ever rise above their established roles in the story. This stands out more than it might otherwise thanks to the absurdly long running time containing many exposition driven scenes where characters sit and explain their backstories to one another and why that backstory makes them feel the way they do in the present. It’s clumsy and adds very little. Emotionally there’s almost nothing to latch onto which makes it very difficult to invest in whether a given character lives or dies. Finding a reason to care about at least one of the people in danger is essential to making a film like this work and Army of the Dead fails to achieve that at every turn.

Not that the actors are bad. For the most part they do what is expected of them Dave Bautista can carry an action movie in his sleep and continues to be a capably engaging lead in terms of his presence and Tig Notaro’s always good value whenever appearing in anything. There’s little to say about the rest as the script does them no favours with them either being relegated to delivering reams of exposition or simply not having a lot to do such as Ella Purnell’s Kate who can be summed up as “the compassionate one”. Audiences typically aren’t expecting a nuanced collection of characters in a film like this but more could and should have been done.

The long running time creates other problems. There’s a lot of bloat to be found in the narrative meaning that there is a complete loss of momentum after the stage is set and it becomes clear what the overall objective is. So much time is spent explaining how the Zombies work or waiting around for things to happen. There is a ticking clock as part of the story but that urgency is never felt because the characters don’t treat it as a if it’s a major issue when it clearly should be. There is a shorter and more engaging film hiding within the overlong and clumsily executed one that currently exists.

A long running time doesn’t have to be a bad thing and there are things referenced that could have made better use of the available time. As with many Zombie movies taking place following the outbreak there exists a world that has adapted to it and found a way to carry on. The characters native to this film live in that world and definitely function within it but there’s no actual worldbuilding done beyond this. Las Vegas has been cordoned off to contain the outbreak which is fine as a detail but beyond fleeting references to what this actually means for the world this film exists in there’s limited exploration.

A similar problem exists where the Zombies are concerned. Dialogue mentions that they are more than mindless corpses driven by instinct to feed -at least in some cases- but that detail only really exists to set up specific events within the film rather than being a compelling mythology that was there to be explored in its own right. This is what the film had to set itself apart from other Zombie movies and the opportunity was squandered through a distinct lack of attention on what the film wanted to be.

One positive is that this is delivered with Zack Snyder’s typical visual excellence from everything to the cinematography to the Zombie designs. Army of the Dead looks great with a variety of creative, kinetic and overall impressive set piece moments. Even if the narrative lacks momentum the set pieces have it in spades and the Zombie variety helps immeasurably in achieving that. The use of the much publicised Zombie Tiger is unlikely to disappoint and the use of space within action sequences is always impressive. If only the visual excellence and creativity in the action was supported by everything else but unfortunately the overall experience is lacking. 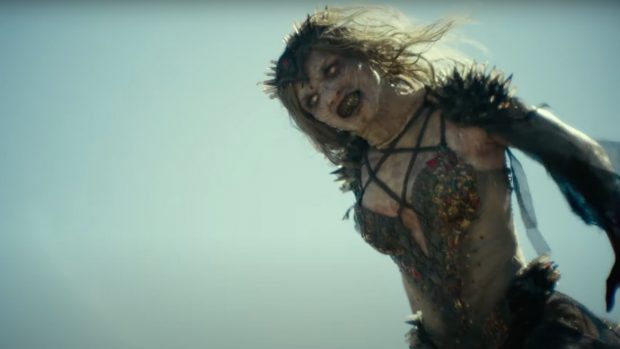 Zombies in Vegas need to have a bit of glamour

A bloated, shallow and unfocused experience that Zack Snyder’s visual excellence fails to rescue. Mashing up the heist and Zombie concepts seems like a good idea in theory but in practice they are kept largely separate which creates a confused narrative with no clear focus on what it’s supposed to be about. The two do connect at limited points but not enough to justify combining them. The characters are broadly drawn as expected and the actors do well enough with what they’re given but the absurdly long running time allowing time for the characters to explain their backstories to one another only serves to highlight how shallow they are. The running time isn’t used well at all as the focus is always in the wrong place. There’s no real worldbuilding to speak of and there’s an implied mythology associated with the Zombies that is barely explored. Army of the Dead looks great and the set pieces are impressive but Zack Snyder’s typical visual excellence isn’t enough to save this.