Aliens come to Earth for mysterious reasons that an elite team have to get to the bottom of in Denis Villeneuve’s Arrival.

Every now and again a sci-fi film comes along that does everything that I feel science fiction exists for. Namely to frame real world issues in a fantastical context that allows for subtle exploration of those issues in a “what if?” scenario. That was basically the premise of The Twilight Zone and that remains some of the best science fiction to this day.

Arrival is very much an idea driven science fiction story that works exceptionally well on multiple levels but at its core the story is a simple one. In a nutshell, a number of alien spaceships appear around the globe and create an environment suitable for humans to attempt communication. The bulk of the film is about finding a way to open up some form of dialogue with them in order to learn their purpose for visiting Earth.

It’s simple and elegant yet really complex. It’s not an easy story to tell as the film has to make standing in a room trying to talk to aliens compelling to watch. It does this through the exploration of the Louise (Amy Adams) character. She is a “best in her field” linguist brought in to open lines of communication. She goes about this slowly and methodically as the aliens are so “alien” that there is no common reference point to start a conversation. 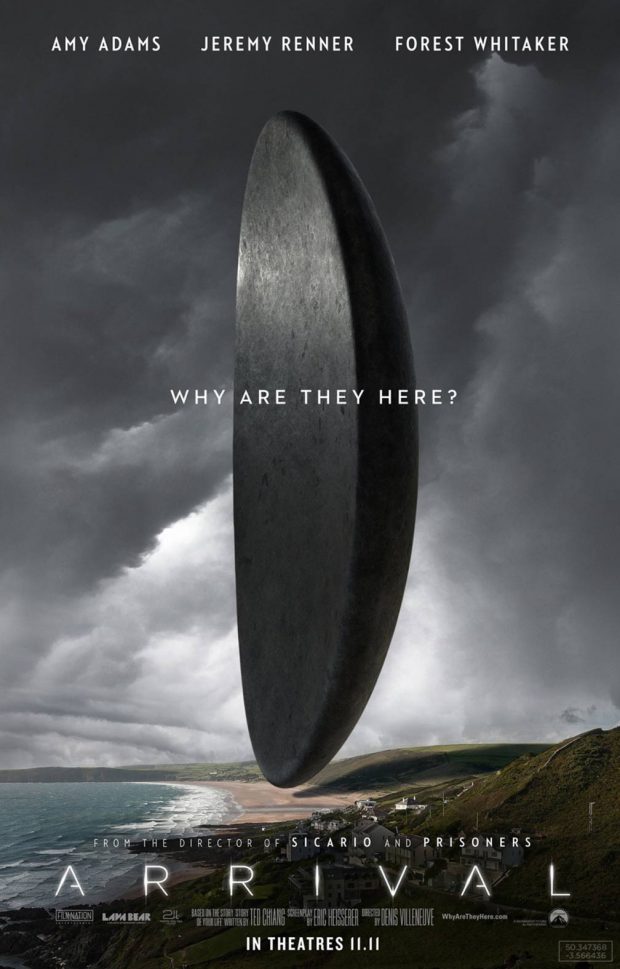 This essentially makes a lot of the film a mystery and a compelling one at that. There are a lot of scenes where Louise stands in front of the mysterious aliens as she tries to get them to understand simple words and phrases. In return she works to translate their attempts at communication and the mystery continues to build at just the right pace to remain interesting. Enough information is teased throughout to keep the film from becoming frustrating but the true answer remains just beyond our grasp. The audience learns along with Louise and the lessons are always fascinating.

I mentioned that this film explores Louise as a character. Her character is as mysterious as the aliens but explaining why would be a major spoiler so I won’t go into that. Over the course of the film more about Louise is revealed and it starts to make sense at just the right moment. It’s really fascinating to watch and Amy Adams has so much to work with as a performer. This might be the best acting I’ve seen from her as she carries the film wonderfully.

Jeremy Renner’s Ian is less interesting but the film isn’t about him. He’s a fellow intellectual who understands what Louise talks about but is able to ask the questions that make us think. As a theoretical physicist he has a different perspective on the situation that adds to the overall mystery of the situation and he is a suitable companion for Louise. Renner is always likeable in his roles and brings more to the character than is probably there in the script but it never bothered me as his role was definitely a supporting one.

Similarly, Forest Whitaker’s Colonel Weber is there to be sceptical yet understanding. The important thing is that he trusts Louise and her abilities so does everything he can to make sure she has all she needs. Michael Stuhlbarg’s Agent Halpern offers the opposite and provides the necessary conflict that pushes Louise to get results as quickly as possible.

Outside of the character exploration, this film does explore modern ideas that are relevant to our world today. The main topic is the idea of global cooperation. The aliens appear around the globe and representatives from different nations interact with them in different ways before cross examining the data they receive. Naturally cooperation starts to break down as different world powers grow more and more nervous of the potential threat that these alien ships represent. It’s easy to understand and especially relevant to the world we presently live in where international tensions are at a high.

I was impressed at how Arrival handles the issue with such a light touch. It would have been so easy for the issue to come across in a really blunt way but it sits in the background and builds naturally as time goes on. The longer the aliens are in the sky the more nervous people get. It’s subtle and feels real.

From a design point of view this is a very impressive film. The alien vessels are monolithic in construction and are eerily silent throughout. Between the ships, the aliens and the representation of their language it’s easy to believe that these are completely unknowable and it all works together to establish a quietly unsettling tone that completely drew me in.

There are few drawbacks but towards the end some of the dialogue gets a little too cheesy and overly expositional. If the script had relied on the understanding of the viewer at that point then it would have been far stronger for it but there was a bizarre decision to spoon feed information to the viewer in the closing minutes that just wasn’t necessary. It does slightly downplay what had otherwise been a really intelligent film. It’s not a massive mark against it but it does distract slightly.

An excellent and thought provoking science fiction experience that expertly blends character exploration, science fiction concepts and real world issues. Amy Adams delivers what could be her career best performance and the character of Louise is fascinating. Everything from the design of the alien ships, the aliens themselves and the representation of their language helps set a tone of uncertainty and mystery that builds throughout the film.

It would have been easy for a film about translating an alien language to become uninteresting but the information is delivered at a solid pace throughout. Towards the end the dialogue is cheesy and expositional with information being spoon fed to the audience rather than relying on the understanding of the viewer based on what had been seen. It’s not a huge problem but it is noticeable.