Preview screenings are a blessing and a curse. The promise of seeing something before anyone else is so intoxicating that you almost always go, but as a result you can never be too sure on the quality of the product that is being used to entice you through the doors. So it was with some trepidation that we ventured into Screen 2 at Cineworld to sample Baby Driver. The title and the trailer had left me questioning if I was going to bother, but the promise of it being an Edgar Wright (Scott Pilgrim vs The World, Shaun of the Dead) directed movie made me suck it up and take my medicine. So, was this a sweet treat, or nasty cough medicine?

Well, I’ll start at the beginning. Baby is our hero, played with a certain suave innocence by Ansel Elgort (Divergent, The Fault in Our Stars), and we meet him as he drives a getaway car for a bank heist. The conceit in this is that he’s got tinnitus, so always has his earbuds in listening to music. This is a fantastic way for Wright to choreograph his action with a constant soundtrack. The resultant car chases, especially at the beginning of the movie flow with a dance-like fluidity, all in time with the music. So much so you are almost tempted to say that this dips into the world of being a musical, but it’s so fresh and unique that it would cheapen it to do so. Nope, this is all an action movie at this point. This fluidity carries on once we move away from the cars, when we get to properly meet some of the other players on this stage, Baby goes to get them coffee, and the sync with his movement and the music as he walks down the street, picks up the coffee, and returns to his compatriots is a joy, and shows what Wright can do with a camera. 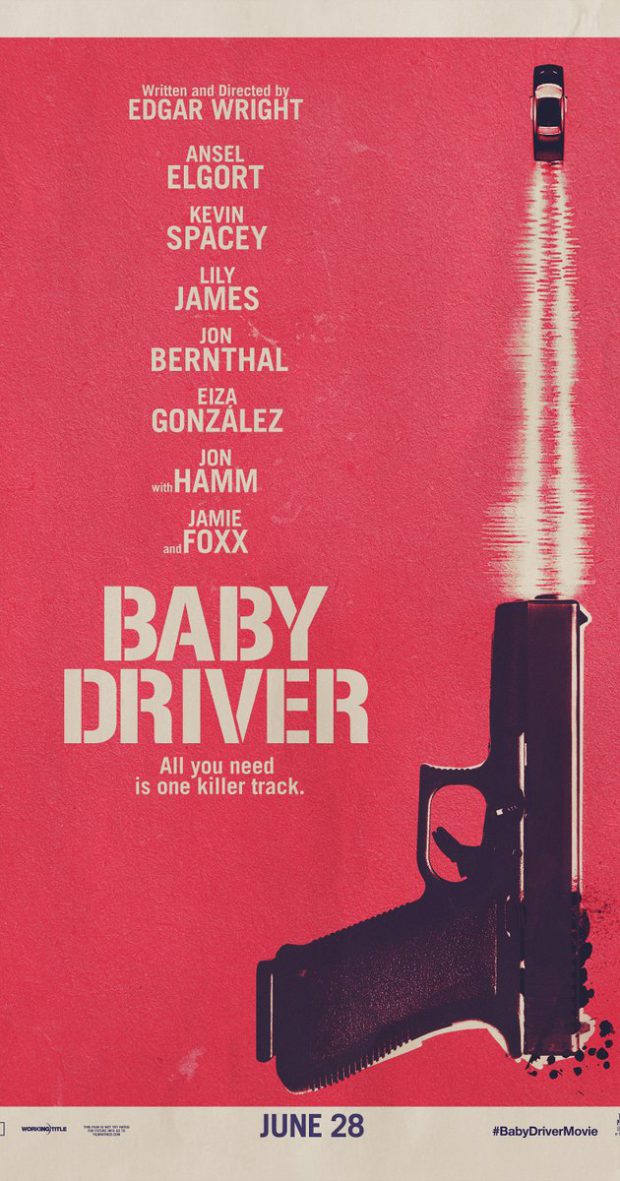 So now I’ve got the initial gushing over the music and camera work out of the way, what of the plot? Well, here things aren’t as fresh or unique. We find out that Baby doesn’t want to be a bad guy, but he owes Kevin Spacey’s (American Beauty, Seven) character, Doc, a fair bit of money for past indiscretions, and we are introduced to the “One more job and you’re clear” trope. Spacey chews up the scenery with aplomb, veering between charming and chilling with such effortless ease that you couldn’t imagine anyone else in the part. The rest of the assorted misfits we meet are a bit of a mixed bag. Jamie Foxx (Django Unchained, The Amazing Spider-Man 2) plays a caricature called Bats, a man so unstable and unreliable that there is no logical sense why he’d be used for any heist. Foxx has fun with his looming threat, but it jars badly with the other characters, especially the cold and clever Doc, that it just feels uncomfortable. Eiza González (Jem and the Holograms, Almost Thirty) is given little to do as Darling other than be the other half of Buddy. Of all the shady characters we meet, Buddy is by far the most interesting. Jon Hamm (Keeping Up with the Joneses, Absolutely Fabulous: the Movie) plays a very satisfying story arc for his character, showing a very nice range, and making his scenes a pleasure to experience, and showing a subtlety that is sorely lacking in Foxx’s character.

To give Baby’s drive to leave this life he fell into behind some fuel we also have his dependant Joseph, played with some verve and a twinkle in his eye by CJ Jones (See What I’m Saying: The Deaf Entertainer’s Documentary, What are you…..Deaf?), an old deaf man that had been Baby’s carer as he grew up, and his love interest, Debora brought to very sweet and innocent life by Lily James (Cinderella, Pride and Prejudice and Zombies). Joseph is used to show that Baby has never been a bad guy, allowing us to see him caring for someone in a selfless way, and that works as well as it needs to. Debora is again not given much to do, other than be as sweet and unshocked by this world that Baby gets dragged into as he is. Their relationship, especially towards the end of the film brings up memories of True Romance, and although there is nothing new here, it does enough to let us invest when there aren’t cars screaming round corners.

The problem that Baby Driver has is that other than its wonderful opening concept it doesn’t do anything that fresh. There is also the unfortunate fact that once the amount of dialogue is increased, the earbuds come out more often, and that wonderful fluidity is stalled, and eventually lost to fairly standard action fare. The biggest culprit is without doubt the character of Bats, and yo can’t help feel that there is a really remarkable film in there if he could just be removed, and a different plot motivator put in his place. Jamie Foxx is a fine actor, but this is not his best work, and I’m not even sure that’s his fault.

All in all this is a fine film, with some nice touches of directorial flair and more than one riveting car chase. If this had come out of nowhere, we would be singing its praises, however this is an Edgar Wright film, and his first since he walked away from Ant-Man. With his pedigree as a director, this is not his best work. I do feel slightly bad for having such high expectations of the man, but he has set his bar so high. Baby Driver is a genuinely good movie, with some fine performances from its more seasoned players, as well as some sweet and energetic ones from its younger cast. The car chases are a joy, and the soundtrack is one you’ll almost certainly go out and get, but it is just missing that spark of originality that we’ve come to expect from Edgar Wright.