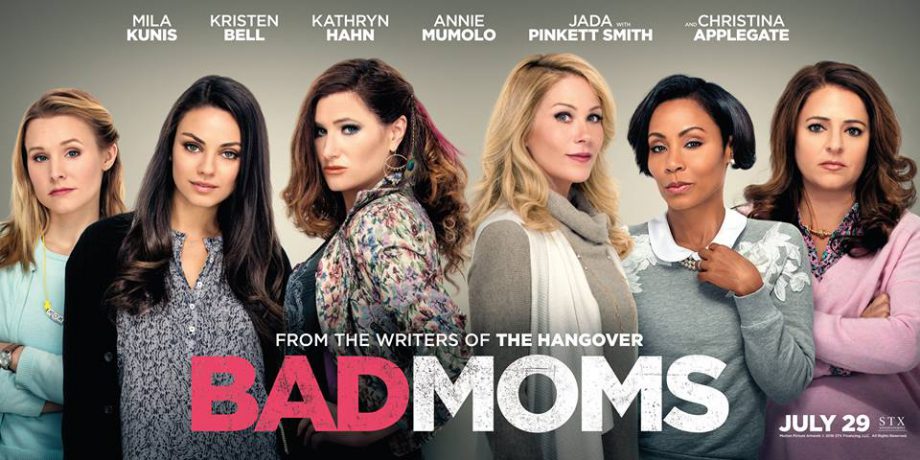 Frustrated mothers go wild in Jon Lucas and Scott Moore’s comedy Bad Moms where life just gets too much for three mothers feeling smothered by their responsibilities.

The film follows Amy (Mila Kunis), a mother of two in her thirties who never really got to experience being young and carefree. It is established early on that she had her first child when she was 20 and her life has been dedicated to raising them ever since.

For the most part the film does an effective job establishing just how hectic Amy’s life is on a daily basis. The opening montage of her trying to get her kids off to school and make it to work is fast paced and Kunis does a great job of seeming overwhelmed while trying to put a brave face on it. I’m guessing a lot of mothers will find this situation familiar.

Eventually things become too overwhelming and she decides that she’s going to do something for herself. She resigns from the Parent Teacher Association, dials back on her responsibilities at work, encourages her kids to learn some self reliance and spends much of her time socialising with two new friends. It’s all very predictable with the exact beats you might expect. At first Amy is loving her independence and sees no fault with it but eventually she realises that being selfish isn’t quite something she can get away with before finding a better balance towards the end.

A predictable plot isn’t necessarily a bad thing but there’s so much else that brings this film down. Many of the situations are exaggerated to ridiculous extremes that betray the believability the film seemed to be going for in the beginning. Many comedies take things to another level to make sure a joke lands and that’s certainly what happens here but for me very few of them actually worked. Humour is an entirely subjective thing so I’m more inclined to say that this film wasn’t for me rather than it being outright bad. There were a few things I personally found funny but laughs were few and far between.

With the exception of Amy, none of the characters behaved like real human beings. As good as Kristen Bell is, her character Kiki was ridiculously naive and awkward just to manufacture laughs. Bell does manage to sell this as she fully commits to the part but I found the character irritating. Kathryn Hahn’s Carla was ridiculously obnoxious to the point that I wondered why nobody ever questioned her fitness as a parent. Her function is to be the polar opposite of Amy and help inspire her to have more fun but the idea is buried in Carla’s inappropriate behaviour.

The film also has an antagonist in the form of Gwendolyn (Christina Applegate) who runs the Parent Teacher Association which apparently gives her the power to dictate policy within the school. As such if she doesn’t approve of a mother’s behaviour then life becomes impossible for them. Her having this much power is really far fetched but Applegate is actually reasonably entertaining in this role. For the most part she’s nicely subdued which makes her lunacy seem almost sinister. She’s a good foil for Amy and the payoff to their antagonistic relationship has more depth than you might expect.

Oona Laurence, who recently turned in a great performance in Pete’s Dragon proves that was no accident when she impresses as Amy’s daughter Jane. It’d be easy for her children to fade into the background but she has many memorable scenes and actually challenges Amy at different points. She is a promising young talent and I hope to see more of her.

It’s a shame that this turned out to be the film it did because the ingredients for something really fun were in there. For the most part the acting is really strong and the film starts off fairly well but the situations become too over the top and obnoxious for me to the point that I couldn’t enjoy it. Comedy is entirely subjective so it might be that this film simply wasn’t for me rather than being bad so your mileage may vary.