There are times when you head into the cinema with no expectations at all, and those times should be cherished as they invariably bring an experience of strong emotion to your life, sometimes good, sometimes bad. It is with this in mind that Seth Gordon’s Baywatch comes to us. A remake that no one was really expecting, and it was certainly not something that anyone was clamouring for, but in the endless churning mill that is Hollywood, it felt almost inevitable that we hadn’t seen the last of those jet-skis, toned bodies, and inexplicable slow-mo running.

Graced with no expectations, a few of us wandered into the screening with only the short trailer as any guide as to how this was going to go. To temper the paragraph that comes after this statement a little, I will say that Baywatch really is not a good film. It’s bad, however it is glorious for that. At no point has it taken itself seriously, and it isn’t trying to be a gritty reboot, or even that faithful to its source material, this is an out and out funny movie, made by adults, for adults, and doesn’t try to hit every demographic in search of more box-office. The jokes hit a lot more than they miss, the characters are fun and funny without being slapstick or cruel, and the plot is a paper thin excuse to move the film along.

The plot, such as it is, revolves around evil real estate owner, and nasty drug dealer Victoria Leeds, played with all the moustache curling vigour and sass that delightful Priyanka Chopra (Quantico, Barfi!) could possibly bring to the part, and her attempt to take over the bay. The only folks that seem able to stop them are the fine folks of Baywatch, who are lifeguards and really should be leaving this sort of thing to the police. Add into this very simple plot, a clash of personalities between Dwayne Johnson (The Fate of the Furious, Moana) playing the legendary Mitch Buchannon, and new bad-boy on the block, and disgraced Olympic gold medallist Matt Brody, a character that yet again shows us that Zac Efron (We are your Friends, Bad Neighbours 2) is a real natural when it comes to comedy. As a side note, you can almost hear the conversation Efron had with the producers when he found out he was starring in Baywatch alongside The Rock, as it’s evident that Efron spent 24/7 in the gym running up to filming. 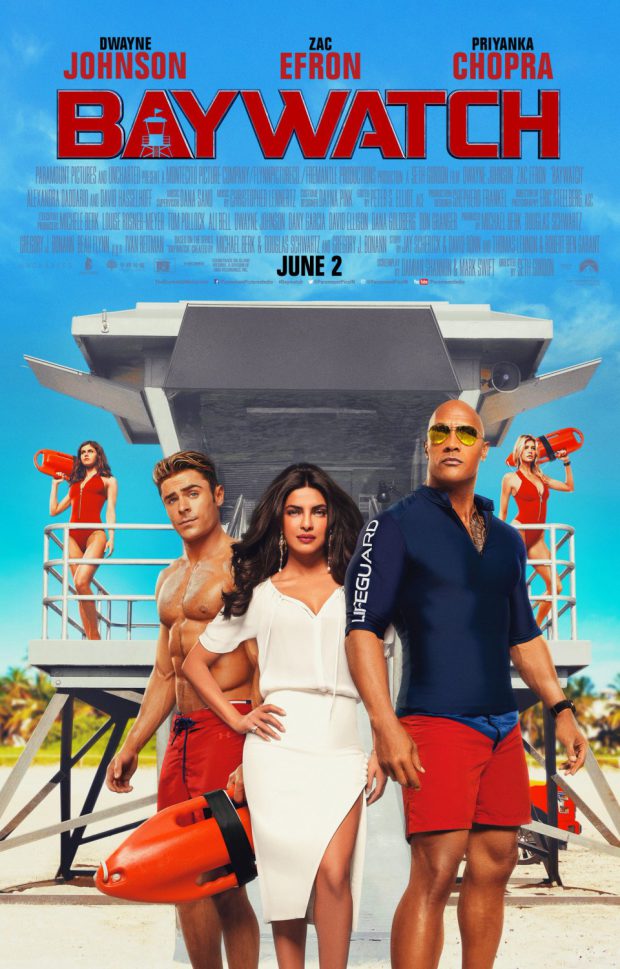 As for the rest of the crew, Kelly Rohrbach in her first major role, brings the classic blonde bombshell nature of C. J. to life, along with adding a nice side of girl next door sweetness to the part. Jon Bass (Loving, All Nighter) is our touchstone into this group of beautiful people as Ronnie Greenbaum, the smart chubby guy that enters the try-outs and inevitably makes it onto the team. You know that he’ll get the girl, have a big heart, and give us someone to root for. We also have Alexandra Daddario (San Andreas, Percy Jackson: Sea of Monsters) as Efron’s love interest, and snarky brunette Summer Quinn, who does a great turn of making this nonsense flow, and gives as good as she gets on the one liners, making the whole thing feel natural, instead of the male soft-porn fantasy it could have ended up as. The last member of the gang is Ilfenesh Hadera (Old Boy, Chi-Raq) playing the part of Stephanie Holden, Mitch’s right hand woman, and the only one of the group to feel a little short changed. She puts in a good turn, but is given very little to actually do, which is a real shame.

For all my praise so far, let’s not forget, this is not a good movie. The script is full of very lowbrow humour, and the plot is obvious and telegraphed. The direction is serviceable at best, and the supporting cast outside of those I’ve mentioned so far are extremely one dimensional. There are also a number of cameos, which are played well, and would be missed for completeness sake from the movie as a whole, but in the grand scheme of things, they add little. The humour in general is very self-referential, yet never grates. In fact, there is almost a sweetness to it throughout the movie, so even when it is time to be gross, and someone is the butt of a joke, it never feels mean. This cast obviously enjoyed being around each other, and it shows on the screen.

All in all Seth Gordon (Horrible Bosses, Identity Thief) has put in a decent turn with this movie, hitting the 21 Jump Street side of the scale rather than the BeWitched one. The cast look good, have fun, and all know what their job is, and how to do it well. Baywatch never tries to be more than it is, and that’s a fun and affectionate pastiche of a well loved 90’s television show. There are no delusions of something greater, and sometimes that’s fine, because sometimes you just want to go to the cinema and laugh with your friends.