Beauty and the Beast

Disney retells the tale as old as time in Bill Condon’s live action adaptation of their animated classic Beauty and the Beast.

Everyone surely knows the story by now. A prince is cursed to live out his days as a beast unless he can find true love before the last petal of a rose falls. Narratively this plays out almost identically to the animated original with a few tweaks here and there. Those familiar with that version will feel right at home here as the experience is largely the same.

I would say that the sense of familiarity is the biggest drawback the film has. The last live action adaptation; The Jungle Book made enough changes to feel fresh but there’s not enough alteration here to make it feel like anything more than a live action retread. Certain aspects of the plot are expanded on such as the story behind Belle’s absent mother and more time is taken to establish a connection between her and her father. 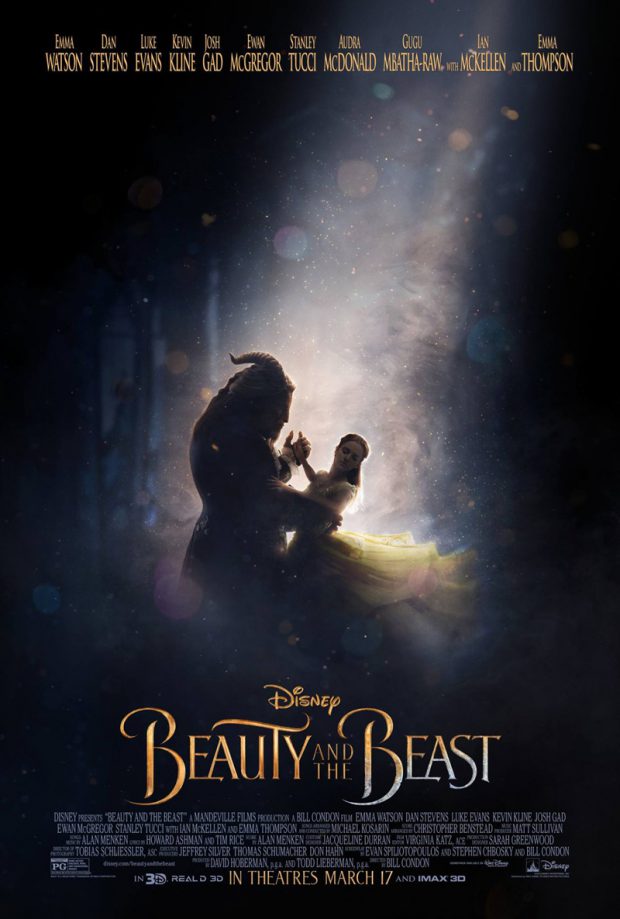 Despite the fact that it’s a largely by the numbers retread of the original it’s actually a very good one. Belle (Emma Watson) is exactly as you’ll remember her from the animated original and Emma Watson does a great job of bringing her to life. She hits all the right emotional beats and her singing voice is really impressive. She carries all of her musical numbers wonderfully and is constantly endearing even when she seems to be a little full of herself.

Dan Stevens plays the Beast and also does a great job. He conveys the short temper as well as the gentle temperament really well and he manages to project a memorable personality despite the fact that he’s buried under motion capture and CGI. I personally wasn’t a fan of the design of the Beast but he certainly is a marvel of visual effects work and always feels real in the surroundings.

A definite highlight is Luke Evans as Gaston, the egotistical villain who wants to marry Belle and won’t take no for an answer. Luke Evans is great in this role with his arrogance being endearingly harmless in the beginning but becoming more unsettling as the film progresses. He’s a lot of fun to watch throughout and doesn’t tarnish the reputation of this classic Disney villain.

The rest of the cast bring a lot to the table. Ewan McGregor as the Candelabra Lumière is overly cheesy but really works as a homage to the original, Ian McKellan brings a sense of refinement to the uptight clock Cogsworth and Emma Thompson adds a touch of class to teapot Mrs. Potts. There are too many others to name but there are no weak links within the supporting cast.

Visually the film is gorgeous. The design work on Lumière and Cogsworth is absolutely stunning and the animation allows for them to give off a lot of personality in their movements. The castle itself is dark and foreboding but with the hint of grandeur that has fallen away. It starts to feel more homely as the film goes on and Belle feels more comfortable within the walls. Since most of the castle is alive it feels like a character in its own right and evolves along with the other characters as the film progresses.

All the songs you’ll recognise are on display here along with a few new ones. The recognisable songs are handled well with my personal highlights being “Be Our Guest”, “Gaston” and the opening number introducing Belle. “Be Our Guest” stands out particularly because of the impressive choreography and creative use of CGI but none of the songs are poorly represented here.

The iconic dancing scene suffers somewhat in comparison to the animated original. That particular scene has its place in history for the creativity on display so this version was never going to be able to do anything to improve on it. What it does with it looks great and brings across the necessary emotions but can’t help but feel like a slightly cheap imitation.

Ultimately if you were a fan of the animated original then you will feel right at home here. It looks great, it’s well cast and the new versions of the iconic songs are well done. Personally I had my issues with the design of the Beast and the slavish devotion to the plot of the animated original was a bit of a drawback but I appreciated the expansion of certain unanswered questions in the original. Disney has definitely proven that their live action adaptations of their animated classics is a worthwhile project.