Ben Younger’s true life boxing biopic tells the inspiring story of Vinny Pazienza, the man who miraculously recovered from the risk of total paralysis to reclaim his title.

Vinny is played by Miles Teller and I found him to be less than engaging overall. I doubt that any of this has to do with Teller’s acting as his performance was really good throughout. The problem seems to lie in how Vinny was written. There wasn’t a lot of depth to him as the focus remained on his stubborn determination to get himself back in the ring rather than exploring who he is as a person.

Part of the problem is that the film takes far too long to get to the accident which wouldn’t be an issue if the time prior to that event had been spent getting to know Vinny. Instead the script goes through the motions up until that point then almost starts again. If the film had opened on the accident then there would have been more time to really dig into Vinny’s reaction to his new reality and the reasons that he really wanted to prove everyone wrong. 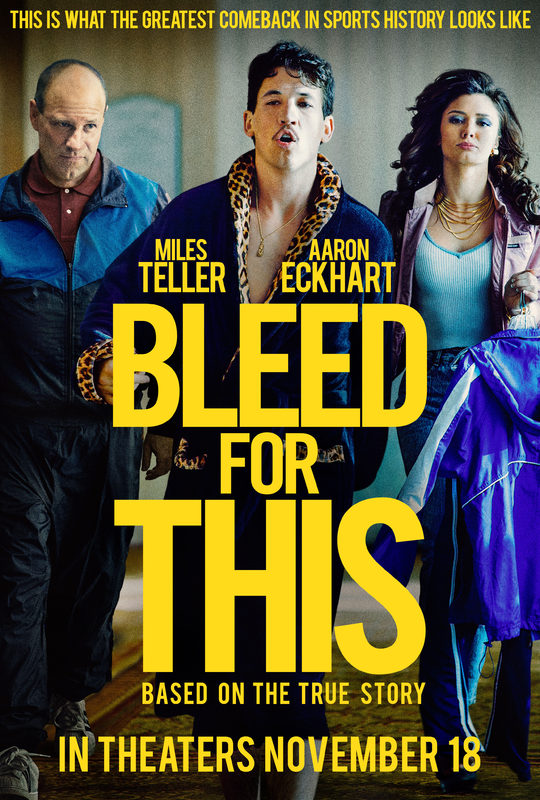 Inconsistencies from scene to scene don’t really help either. After the accident Vinny is told that having the Halo fitted was the least likely option. Undergoing that procedure might mean that he never walks again but pretty much after that we see him getting himself out of cars and generally moving around on his own. He has difficulty sure but he can clearly walk. I found myself scratching my head wondering why that warning was part of the script if it was never going to go anywhere.

The scenes following the accident as he builds himself up to being fighting fit again are the best in the film. There are some really effective moments as Vinny deals with the conflict between his willing spirit and unwilling body. Not much time is taken to add much depth to this but Teller’s performance does manage to fill in some of the gaps here.

Once the story gets to the boxing match that serves as his comeback things really start to fall apart. I didn’t find the match exciting as it seemed to be lacking any real stakes even though it was mentioned that this could leave Vinny paralysed. It should have been tense but something about it didn’t quite land. It was technically impressive with the punches feeling visceral but too much focus was given to the crowd rather than the action in the ring. There have been far better boxing sequences seen in movies and this won’t really hang around as one of the more memorable ones.

Aaron Eckhart is this film’s secret weapon. His performance is so transformative that I didn’t realise it was him until I saw his name in the end credits. As with Vinnie the character of Kevin Rooney isn’t especially deep but Eckhart’s performance means that this is hardly noticeable. His no nonsense attitude that is often tempered by his personal demons really anchors the film and his relationship with Vinny is really engaging. More scenes between them would have definitely made for a better film but there are no complaints about Eckhart’s performance here.

There aren’t many other characters which is probably a good thing as the film feels overstuffed enough but I would have liked to see more from Vinny’s parents, Angelo (Ciaran Hinds) and Louise (Katey Sagal). With Kevin’s unconditional support of Vinny as he tries to defy the advice of every doctor he talks to it would have been interesting to see more of a conflict from concerned parents. There are elements of that in here but they are far from significant. The most powerful example is Louise surrounding herself by religious artifacts because watching her son fight is too painful for her. Small moments of brilliance like this suggests that there is a better film in here somewhere trying to get out.

A fairly unmemorable experience that has a better film hiding just beneath the surface. Miles Teller does a good job but Vinny is so ill developed that he doesn’t have much opportunity to deliver a deeper performance than he does. Having the accident appear earlier in the film would possibly have enhanced things as it arrives far too late. There are great moments after the accident that allow Teller to deliver but these are few and far between and don’t go deep enough. The boxing sequences are fairly by the numbers despite the stakes involved and focus too much on the crowd rather than the action in the ring.

Aaron Eckhart is the best thing about this film with a transformative performance hiding a fairly shallow character. His acting fills in a lot of these gaps and his relationship with Vinny comes across well. I would have liked to see more conflict between Kevin and Vinny’s parents. Elements of this are definitely in here but they are few and far between. There is a better film in here somewhere but it never quite gets the chance to come out.