Transformers is a franchise that has become popular to hate over the years with many of the negative opinions being attributed to decisions that director Michael Bay made. Many say that they are racially insensitive, sexist, juvenile and overflowing with incomprehensible action that audiences can’t invest in emotionally. All of these are true to varying extents depending on the film and yet I’d go on record as saying I don’t mind them on the whole. They are films I find myself able to enjoy on some level in spite of their flaws and I absolutely agree that a course correction was becoming necessary particularly after the dismal box office performance of the most recent entry.

I suspect that Bumblebee will be the course correction that many were looking for. This film was clearly made by people who have a lot of reverence for the source material as it’s reflected in the presentation. I’m not the biggest authority on the original cartoons but I’m told that the prologue is exciting for long term fans as it evokes the iconic design elements that people grew up with. Even though I don’t have a personal connection I recognise that the action is coherent, the robots involved clearly have connections to one another that extend beyond the battle and the design work on each robot is impressively distinct.

From here the film slows down and focuses on the core relationship between Bumblebee (Dylan O’Brien until he has his voice box torn out) and Charlie (Hailee Steinfeld); a teenage girl struggling to cope with the recent death of her father as well as the notion that she is trapped inside her own life. Comparisons will immediately be drawn to Spielberg’s E.T. and Brad Bird’s The Iron Giant in how this relationship is portrayed. This works in the film’s favour as the core relationship is inspired by predecessors that explored this really well. Bumblebee draws on its influences without copying them directly meaning that it holds up in its own right.

As with the two films that I mentioned, the Bumblebee/Charlie relationship works so well because both characters answer a need that the other character has. Bumblebee feels lost and alone because he has a fragmented memory of his origins and has no real sense of his own purpose. Basically he has been separated from his family and is terrified of what that means for him. Charlie is looking for someone who can understand her after having lost that following the death of her father. Her mother (Megyn Price) seems to be coping with the loss by trying to control her to some degree so she’s somewhat adrift when it comes to her own sense of purpose. Bumblebee entering her life is exactly what she needs as he takes the time to understand her feelings and relies on her to answer his need for emotional support as well.

Despite the emotional story motivated by loss and longing the tone is relatively light. There are moving moments throughout but on the whole the film maintains a charming sense of humour that makes it very accessible. Much of the comedy is mined from Bumblebee’s curiosity and lack of understanding of how things are supposed to work on Earth. It never gets to the point of being obnoxious or inappropriate and provokes some genuine laughs throughout. 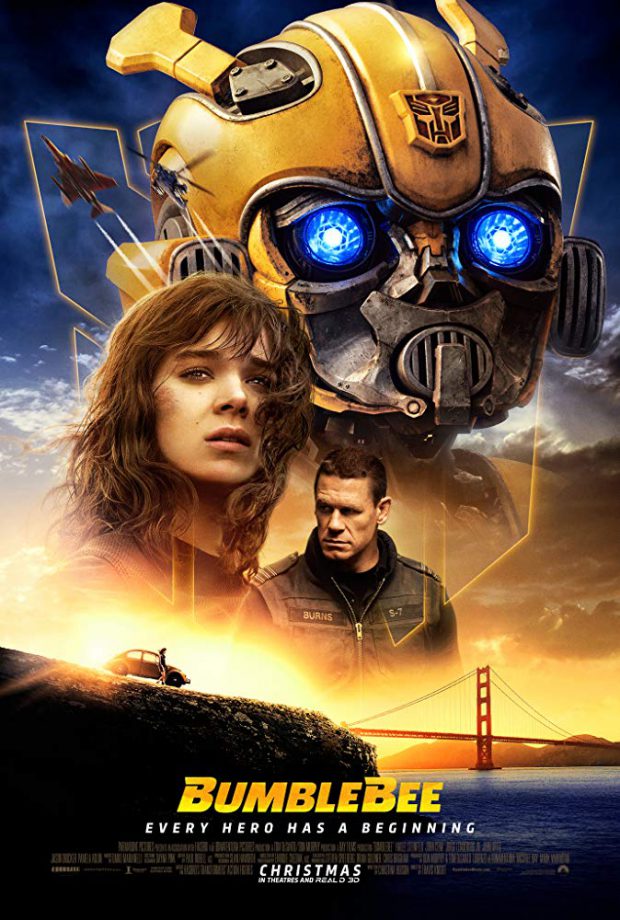 One trait of the Bumblebee character carried over from the Michael Bay movies is his inability to speak. The point where that is taken away from him is depicted in the film so the sense of loss is made clear early on. It’s easy to see why this decision was carried over as it encourages more clever and visually interesting communication. Rather than Bumblebee sitting around talking about how he feels it all has to be conveyed through a combination of visuals and other sounds. Bumblebee’s body language is brilliantly animated making his emotional state clear at any given time and using the radio to augment that works very well while also being something that Charlie was able to give to him in order to help him heal. It’s really impressive when the layers are peeled back to examine all that this film accomplishes. It basically does what the first Transformers film did but far better because Bumblebee’s side of the connection is just as important as Charlie’s.

Hailee Steinfeld is excellent as Charlie. She’s tough yet vulnerable while being very capable as well as being prone to making mistakes. She’s a teenager so doesn’t have all the answers in life whether she thinks she does or not and projects an outward persona to cover up the pain that she’s dealing with. Steinfeld’s performance brings all of that across and more. She makes for a really engaging lead and is more than up for the task of believably playing against a fully animated character.

Charlie’s main supporting character outside of Bumblebee is Memo (Jorge Landeborg Jr.) a local boy around her age who predictably has a crush on her. The film successfully subverts the expectation that they will end the story as a couple but he doesn’t make enough of a contribution to the film to deem his presence in any way necessary. There are a few comedic moments involving him that work and he functions as a human character who can be in on Charlie’s secret to give her someone to talk to about it but the film wouldn’t have suffered too much if he wasn’t in it at all. Charlie was a strong enough character to carry it on her own.

The main antagonists are Decepticons -evil Transformers- who go by Dropkick (Justin Theroux) and Shatter (Angela Bassett). They arrive on Earth looking for Bumblebee so that they can achieve their goal of wiping out the Autobots -good Transformers- and assert their dominance. As villains there isn’t much to them other than them eventually becoming an obstacle that Bumblebee and Charlie have to deal with. Visually they are distinct and they feature in some fun action sequences but have very little to offer other than that.

Sadly underused is John Cena’s Agent Burns; a military officer who acts as a reluctant antagonist. He is portrayed as one of the only people on the military side of things who has any common sense such as his hilarious line about how stupid it is to trust beings who willingly call themselves “Decepticons”. Cena’s dry wit and perfect line delivery brings some of the film’s funniest moments but there just wasn’t enough of him. There was a lot of potential in him being a soldier following orders even though he thought they were stupid.

Bumblebee boasts some really fun action set pieces. The afore mentioned prologue on the Transformer homeworld Cybertron is a highlight but there are others sprinkled throughout that make good use of the transformation gimmick. The striking thing is that the action sequences are relatively small in scale yet feel urgent and are informed by the established characters. A great example of this is the climactic sequence which is just as much about the core relationship between Charlie and Bumblebee as it is about the fate of Earth hanging in the balance. It feels more about the former than the latter which is absolutely the right choice.

A strong and thoughtful addition to the Transformers franchise that fixes a lot of the previous mistakes made and delivers a genuinely heartfelt core relationship. Charlie and Bumblebee are great characters who answer a need the other has and grow closer as the narrative progresses. The film definitely wears its influences on its sleeve which is no bad thing as it manages to reference earlier works without directly copying them. One of the side characters could have basically been cut and the villains don’t add up to being all that much but the film more than makes up for that with a heartfelt character driven story, coherent and creative action sequences as well as an engaging sense of humour. This definitely provides hope for the future of the Transformers franchise.