The biggest problem with biographical films is that the cradle to grave approach can be very limiting from a storytelling point of view. With a lifetime to cover it inevitably means that not everything can be covered in the detail that it may deserve. Churchill overcomes this problem by choosing a very short period of time in the life of Winston Churchill (Brian Cox) which means that the exploration can be far more intimate.

Winston Churchill is a historically significant figure due to his leadership of the country during the second World War. Taking a snapshot of a short period within that is a really good idea as there’s lots that can be mined just from exploring Winston Churchill as a person.

That’s pretty much all this film does. The War is something distant and unseen yet always present with everything that Churchill does and says being about furthering the cause to bring about Germany’s surrender. Pretty much every scene is a conversation that Churchill has and the entire film is focused on his emotional state brought on by the decisions he has to make.

This film could be criticised for historical inaccuracy and I can understand why. Enough has been documented about Winston Churchill during the War that it should be easy to tell a true story rather than an exaggerated or fictional one. This didn’t really bother me as the film is more about getting a sense of the man rather than following the events from a purely mechanical point of view. 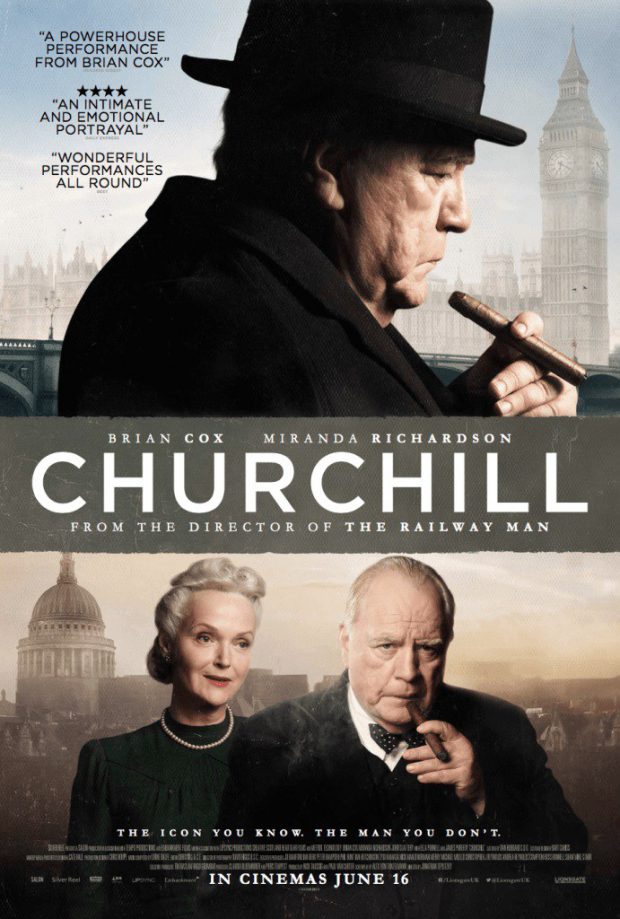 Brian Cox delivers a first class performance as Winston Churchill. The physicality of his performance is likely something that will stand out to many and it’s definitely notable. There’s a frailty to the performance as he struggles to move but also a sense of pride and self determination as he refuses to give into old age and appear weak to those around him. It’s a great contrast between strength and unavoidable weakness that helps define Cox’s portrayal of the notable historical figure. Obvious touches like the constant cigar smoking help sell his performance as well. He has a particular way of smoking the cigar that suggests arrogance.

The film is full of opportunities for Winston Churchill to deliver some form of speech and Brian Cox’s delivery is note perfect. His booming voice and precise way of speaking are both really effective and help bring the character of Winston Churchill to life as someone who demands to be heard.

Ultimately the film suffers on a story level. Not depicting the War is a good idea in that a more intimate exploration of Winston Churchill is allowed but the trade off is that it’s difficult to connect the decisions made to the consequences of them. It’s difficult to understand the scope without seeing those it affects.

Framing much of the film as a debate between Churchill and American General Eisenhower (John Slattery) was a good idea as it offered a clear contrast between the needs of the mission -as argued by Eisenhower)- and the perspective of those giving their lives for the cause -as argued by Churchill-. It’s a fascinating argument as both sides can clearly be seen. It also simplifies the issue into something more personal for those involved which makes it easier to relate to. I also found it interesting to see Churchill branded a nuisance by those planning the mission because he dares to speak out against it. It becomes an uphill struggle for him as he comes from the point of view of having seen exactly this sort of campaign before and having intimate knowledge of how poorly it can turn out.

I would have liked to see more insight into the sort of man Churchill was. It does exist in the film but it feels very broad in the execution. In some ways it appears that the boxes are ticked without going into massive detail. Some attention is given to the fact that he argues for what he believes in, there are pockets of time devoted to showing his relationship with his wife Clementine (Miranda Richardson) and some attention is given to his impatience when dealing with his secretary but there’s a lack of focus on any of it. By themselves these scenes are great to watch but they don’t feel like they feed into a cohesive whole other than informing the D-Day story. It’s important to do that but I would have liked to see more background brought in.

An interesting film with a powerhouse performance from Brian Cox as a historically significant character. Setting the film over a short time is a really good way to deliver an intimate account of Winston Churchill at that particular time in his life. Brian Cox’s performance carries the film through his physicality and line delivery. Framing the D-Day landing as an argument between Churchill and Eisenhower is a really good idea as it simplifies the issue into being a conflict between what both men believe which makes it easier to relate to. The film does suffer on a story level as the War is depicted as being something far away which works as a character study but it means the scope of the decisions being made is somewhat lacking. Another issue is that the film can feel like it’s doing little more than ticking the boxes of what it needs to cover rather than really exploring the background.