A young aspiring musician unwittingly enters the Land of the Dead and gains a wider perspective on the importance of family in Lee Unkrich and Adrian Molina’s Coco.

Pixar are often among the best at bringing raw and honest emotion to an animated feature. Inside Out is one such example of this but much of their back catalogue is loaded with what people would colloquially describe as “The Feels”. In many ways Coco is no different though it isn’t outwardly as powerful as some of the earlier Pixar efforts.

Miguel (Anthony Gonzalez) belongs to a family that despises music to a really extreme degree. His grandmother Abuelita (Renée Victor) will put a stop to anything melodic happening with earshot and even goes as far to destroy Miguel’s guitar to stop him from pursuing his dream of following in the footsteps of his idol Ernesto de la Cruz (Benjamin Bratt). It’s exaggerated for comedy and simplicity which definitely presents the obstacle clearly but it doesn’t quite work as setup goes.

Naturally Miguel is the outcast from his music hating family and hears it everywhere he goes. Music is very quickly established as something he has a connection to and has to let out in one way or another. Unfortunately his family don’t support him here which makes him feel isolated.

Ultimately this is the central conflict throughout the film -though there are other connected conflicts that I will come onto- and the catalyst for the coming of age journey Miguel embarks on. During the celebration of Dia de Los Muertos -or Day of the Dead- Miguel unwittingly stumbles into the land of the dead and interacts with deceased members of his family who have crossed over to visit unseen. 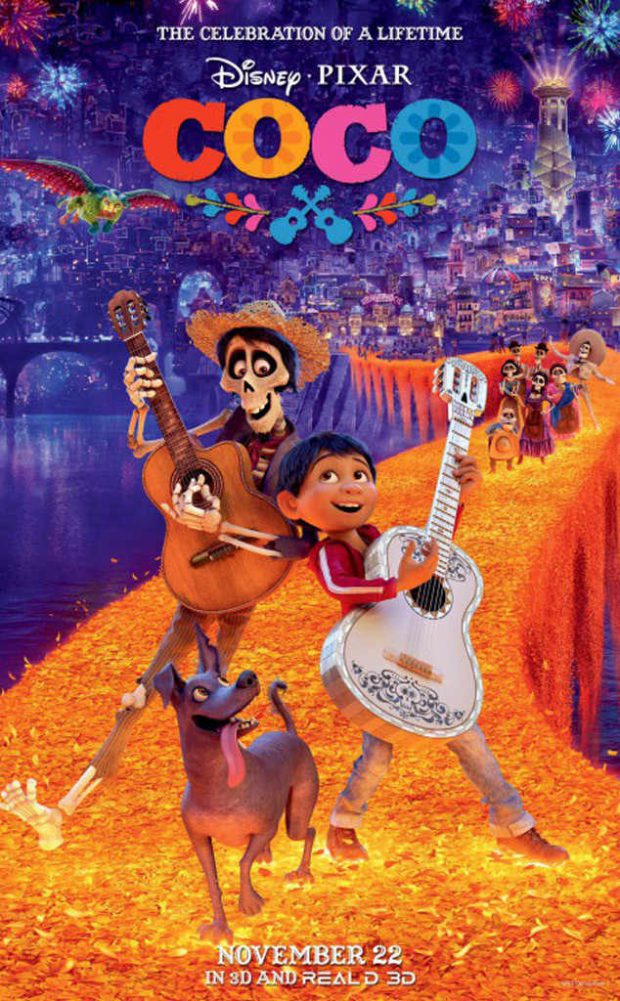 Once in the Land of the Dead he finds himself pursued by his great, great grandmother Mamá Imelda (Alanna Ubach) who wants to send him back to the Land of the Living under the conditional blessing that he won’t attempt to play music. Miguel decides to rebel against this and looks for another blessing that will allow him to follow his dreams. Along the way he meets Hector (Gael Garcia Bernal); a loveable rogue who reluctantly helps him along the way. His role is a significant one but to say more would constitute a spoiler.

This film is best enjoyed while knowing as little about it as possible. The story itself is nothing new or remarkable and plays out in really predictable ways but it’s presented in such a way that experiencing it is still compelling. Coco has an incredibly moving and well earned emotional climax that makes perfect sense within itself. It does take a while to get there with some early scenes that drag more than they should but the journey is more or less worth it.

What carries this more than anything else is the characters. Miguel is an engagingly naive yet determined protagonist, Hector has a lot of depth hiding underneath the simplistic nature of the character and Miguel’s family all have their own distinctly memorable traits even if none of them really stand out other than Mamá Imelda.

Ultimately the film is about family and the importance of respecting legacy. It’s a lesson learned by every character in the film in one way or another and carries the story as its central theme. The backdrop of the Mexican Day of the Dead brings the focus around to how family are remembered and what makes those memories endure. Miguel starts the film by having no respect for what has come before and his great grandmother Coco (Ana Ofelia Murguía) struggles to remember what came before her due to her age and implied dementia. It’s a very strong theme that touches the characters in different ways and makes each of their motivations uniquely interesting.

The backdrop is also a significant contributor to the experience as a whole. Focusing the narrative around the Mexican Day of the Dead and having that culture make up the DNA of the film is really refreshing while allowing for some gorgeous visuals. The Land of the Living and Land of the Dead are visually distinct with a unique identity to each of them making it perfectly clear which setting is being used at any given moment. Design work on the characters is similarly stunning with the skeletal versions of the characters being recognisable compared to their living counterparts yet still with their own unique properties. Everything is punctuated by bright, vibrant colours that bring both worlds to life and there are backdrops that are truly breathtaking. The animators really outdid themselves here by delivering one of the most visually unique films to be seen in some time.

A well told coming of age story with a strong central theme that affects all of the characters in one way or another. Ultimately the film is about family and the importance of legacy. The backdrop of the Mexican Day of the Dead allows the focus to be on how a family are remembered and the importance of keeping them alive throughout the generations by ensuring that they live on through stories. It does take a while to get beyond the initial setup and get to the point but it culminates in a moving and well earned ending. The film also dazzles on a visual level with vibrant and colourful backdrops that are simply breathtaking as well as some impressive character designs. Aspects of the plot feel a little predictable but the overall experience is very well crafted and feels unique even though it largely isn’t.