Joe Wright’s Darkest Hour tells the story of Winston Churchill’s early days as Prime Minister and the decision he made that continues the Second World War.

Winston Churchill seems to be a popular figure to adapt at the moment with his portrayal by John Lithgow in The Crown and Brian Cox bringing his own particular stamp to it in last year’s Churchill. You’d be forgiven for thinking what could be done differently after extensive recent coverage of this iconic historical figure. Naturally his exploits are well documented and his role in the Second World War has gone down in history as being significant so there should be plenty of stories to tell.

This film opens with the time period immediately before Winston Churchill was installed as Prime Minister. The tone is immediately set as chaotic as a version of Britain in desperate need of strong leadership and hope is established. Winston Churchill is just the man to bring those qualities to a nation and a cabinet that sorely need it.

Gary Oldman takes on the lead role and disappears underneath a mountain of prosthetics rendering him nearly unrecognisable. When combined with a first rate performance you get something really impressive that is captivating to watch.

Churchill’s eccentricities are part of what make him such a memorable historical figure and Oldman captures these wonderfully. Everything from the speech pattern to the way he moves help to create this persona along with a smart script that focuses on his drinking and cigar smoking throughout. The visual presence of Churchill is expertly crafted and the vocal performance is more than a match for it. 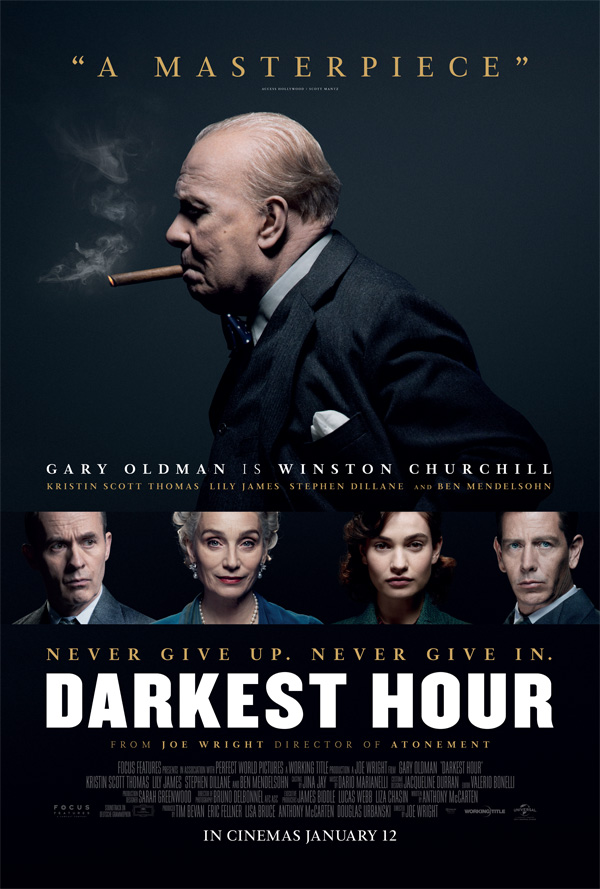 Much of the dialogue is very sharp and clever especially when Churchill matches wits with those that don’t approve of him such as Ben Mendelsohn’s King George VI. This film puts all that Churchill was on display and encourages the viewer to see him as a heroic figure despite the fact that it shouldn’t really work.

Unfortunately this performance very much belongs to a better film. The narrative itself leaves a lot to be desired with an overlong and meandering plot that feels like it doesn’t really know what to focus on. There are plenty of big speeches matched with a swelling score to sell the importance of them but anything surrounding them is largely dull.

The film does a good job setting the scene and building a sense of scope. Repeated cutaways to what else is happening at the time help remind the audience of the stakes as well as keeping the devastation associated with World War II in both the viewer and Churchill’s mind. Humanising the conflict by detailing how the common people felt about it is solid as ideas go but the actual execution of these scenes is pretty clumsy. It almost works but the overwhelming cheese factor makes those attempts come across as schlocky.

Missed opportunities can be seen throughout. Churchill’s relationship with his wife Clemmie (Kristin Scott Thomas) is referenced and featured in some compelling scenes but never quite gains the traction it needed. Interactions with his bewildered secretary Elizabeth Layton (Lily James) are entertaining enough thanks to Lily James complimenting Oldman’s performance with her believable and hilarious reactions but the relationship doesn’t feel developed which is a shame considering the eventual focus on the common people perspective on the War.

Ultimately this film fails to make an impression despite a memorable performance by Gary Oldman. It’s a performance that belongs in a better film as what is presented never quite becomes compelling. There are well performed speeches throughout with a swelling score signalling their importance but the surrounding plot is fairly dull. Attempts to raise the stakes and show the extended scope of the War as well as focus on the perspective of the common people are certainly appreciated and almost work though are undermined by clumsy execution.