The worst oil spill in U.S. history is given the film adaptation treatment in Peter Berg’s Deepwater Horizon. Berg’s film follows the events of that day and the effect it had on the people involved.

Disaster movies are a dime a dozen these days and it could be argued that making a film about one that really happened is blatant exploitation of something that people will be familiar with. In some cases that’s true but I wouldn’t necessarily say that this is the case here.

The key thing is that this film avoids being overly melodramatic and it makes the whole thing seem more real. The events speak for themselves and the subtle performances of the actors really help sell the emotions that their characters are experiencing.

Mark Wahlberg takes the lead as Mike Williams, an engineer on the oil rig. Right away we are introduced to his family and see his relationship with them to establish the personal stakes for Mike. It does come across as a really transparent way for the audience to root for him but it does help set Mike up as an everyman character that audiences can easily relate to. The scenes with his family also effectively set up the disaster using a coke can as an example. Using Mike’s daughter to give a simple explanation of what we are about to see is a clever way to get around the complicated engineering reasons. 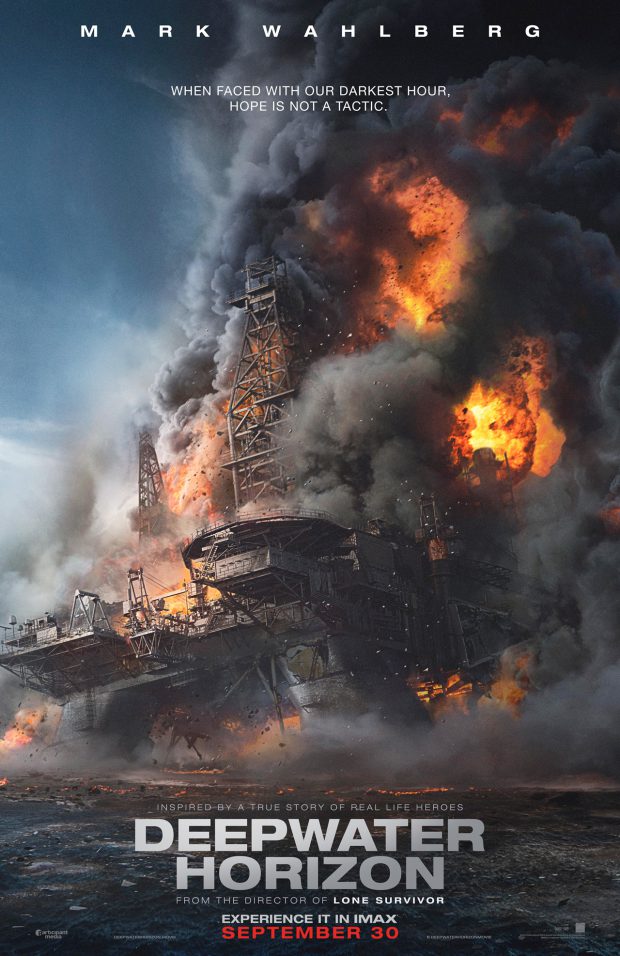 Wahlberg is pretty magnetic in this role. He successfully comes across as an everyman and gets his mouth around the dialogue capably. There’s a particularly hilarious scene where he recites all of the repairs needing done to the oil rig that reminded me of his quick-fire moments in the two Ted films.

Other characters aren’t quite as well developed but are memorable anyway. Gina Rodriguez delivers a believable performance as one of Mark’s colleagues with a lot of humanity behind her tough persona. There’s an excellent moment of pay-off towards the end involving her that is built up throughout.

Kurt Russell really impresses as the boss, Jimmy. He’s cautious and experienced which the film uses to set him up as the man who was right about what could happen. There’s a scene where the crew are awarded yet another perfect safety record trophy which helps set up just how skilled Jimmy is. It does feel like the film draws a line between Jimmy and the BP representative as to who the good and bad guys are at times but thankfully the film doesn’t make too much of it. Russell delivers an excellent performance throughout but suffers from a lack of screen time once the disaster hits.

On the BP side we have John Malkovich who wants to rush through the job and is clearly meant to be the villain of the piece. Thankfully this isn’t overplayed but his performance is just slimy enough that we know he is supposed to be greedy and opportunistic.

The characters are fairly simple but fit into their roles in the narrative well. It’s always clear who everyone is and there’s enough depth to make them feel like more than disaster fodder.

To achieve this the film spends a long time setting up the situation before the disaster actually happens. This build-up is a masterclass in tension as we all know what is about to happen but are made to wait for it. In the meantime lots of work is done to establish the characters as a functioning unit who have worked together for a long time to the point that they have in jokes and shorthand. The film does a great job of establishing natural camaraderie between all of the characters.

It’s interesting that the early part of the film talks about pressure and the need to relieve it so often because that’s exactly what it feels like when the disaster aspect of the film finally hits. The audience is made acutely aware of what is about to happen so when it does it feels like something of a relief.

The second half of the film is brilliantly executed with loud explosions and the constant worsening of the threat. The effects can be seen on the characters who are covered in cuts, bruises, mud and blood. The tension constantly ramps up and the whole thing feels very chaotic. It’s impressively visceral without feeling gratuitous.

Having everything presented in such a chaotic way comes with its own problems though. At times it can be hard to figure out what is going on or who happens to be in given situations. It does eventually clear itself up but there are moments of confusion throughout. I imagine that’s just how it would have felt for the people involved but as a viewer it’s a little difficult to follow in places.

An engaging and well executed disaster movie that impresses throughout. The film does a good job of establishing the characters and their relationship to one another before the inevitable disaster strikes. When it does it’s loud, visceral and chaotic. At times it’s difficult to follow but for the most part it works really well and the performances of the actors help to sell the whole experience.