The Marvel Cinematic Universe takes a stroll into the mystical with Scott Derrickson’s Doctor Strange and offers some new rules for us to apply to this universe.

Doctor Stephen Strange (Benedict Cumberbatch) is a gifted and respected neurosurgeon who definitely believes the hype that surrounds his talents. He takes on cases that will win him fame and prestige while generally coasting through life on the assumption of his own superiority. This all changes when being careless results in an accident that cripples his surgeons hands and leaves him unable to continue his work.

His desperation leads him to Nepal after hearing about impossible results from someone else and he ends up in the company of the Ancient One (Tilda Swinton) who tells him that the world is infinitely more complex than he can possibly imagine. After this he throws himself into learning how to manipulate the mystic arts in an effort to heal his damaged hands.

I don’t usually apply this much plot summary to my reviews but I feel it was important to outline the main thing that gets the plot moving. At its core this is a film about a man who feels invincible and then receives a harsh lesson in how vulnerable he really is. Stephen Strange is a man of science and medicine so to be told that nothing can restore him to the surgeon he was is impossible for him to accept. Basically he has to accept his new reality and find a way to move on.

Of course this film is about more than a man dealing with a disability as he learns an entirely new craft that he can apply his intellect to and understand. It really gives him a reason to live again and Strange’s character arc is all about understanding that he has a significant place in the universe.

Strange as a character has shades of Robert Downey Jr’s Tony Stark in the first Iron Man film as the broad strokes of their origins are similar. Both are arrogant until they are in an accident that causes them to change the way they view the world until they essentially become superheroes. The similarities can be attributed to the whole hero’s journey story that many comic book characters go through but it’s the arrogance that stands out as being the comparison here. Thankfully this film plays it very differently as Strange immediately has a sense of compassion about him. If he didn’t then arguably he wouldn’t be a surgeon. Also, Downey Jr. and Cumberbatch are very different actors and play arrogance very differently. 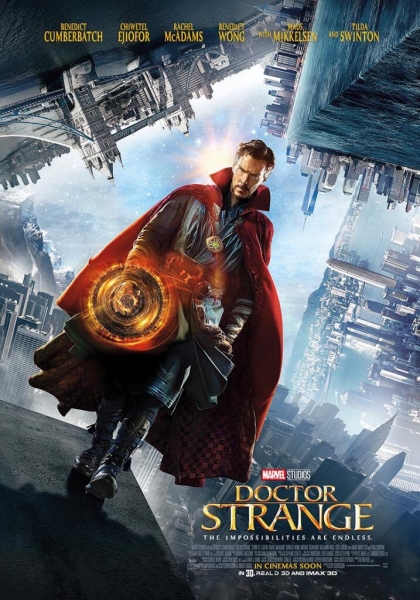 His arrogance carries through the film and keeps him confident when things really start to become problematic. He always assumes that the rules are there to be broken and endlessly studies to find new ways to do things. It’s an interesting angle and Cumberbatch is able to blend the self importance with the keen student seamlessly. His thirst for knowledge really comes through and ultimately underpins his character.

Tilda Swinton’s The Ancient One is an interesting character. Swinton plays her with an air of effortless mystery and she has a light touch to the way she goes about training him. She comes across as immensely knowledgable with a good sense of humour and helps make all of this more believable.

Chiwetel Ejiofor’s Mordo is a good counter to Strange as he represents everything that he can learn as well as all of the rules that he should follow. Strange is built as being someone who is more radical in his thinking and sees different ways to solve problems. There are a number of scenes where Mordo tells Strange what he can and can’t do which makes Strange curious as to what will happen if he tries something else. It’s a good relationship between the two characters and probably doesn’t get as much screen time as it should. I feel that more advantage could have been taken of the fact that Benedict Cumberbatch, Chiwetel Ejiofor and Tilda Swinton are able to share the screen and ground this bizarre mystical world into some form of reality.

Benedict Wong as Wong -yes really- is another highlight. He juggles wise mysticism and modern day humour perfectly and supplies some of the best laughs in the film while appearing to be strong and skilled in combat. Wong is a good addition to the cast and hopefully we’ll see more of him.

Sadly Rachel McAdams gets a bit of the short straw. Her character is little more than a half baked love interest who could have been cut with very little impact on the rest of the story. McAdams definitely delivers in the scenes that she has but they feel so inconsequential that it’s a waste of her talents.

In true Marvel tradition the villain is really underwhelming. Mads Mikkelsen’s Kaecilius disappears for large chunks of the film so becomes someone that is talked about more than seen. Without spoiling it he is a small part of something larger but he’s the main antagonist for much of the film so it would be nice to see that. He does have some good interplay with Cumberbatch but there definitely could stand to be more to him.

This film is an origin story for the character which means that it has some really familiar beats. If you’ve seen one of these then you really have seen them all. The second act is largely filled with training and examples of what he will be capable of before something tests what he has learned and forces him to step up in a big way towards the end.

Just because it’s a mechanical way of doing an origin story doesn’t mean that it’s bad. It’s actually very good as the lessons he learns about the mystical world relating to the physical world are fascinating. There’s a lot of double talk and reminders of rules that can’t be broken as a way to telegraph exactly what rules will be broken by the end of the film. It’s a good ride for sure but your mileage will vary depending on how sick of origin stories you are.

The main issue I have with the origin story concept in general applies to this film. I always feel like there is a big chunk in the learning curve missing. Characters often go from being barely competent to incredibly skilled with nothing indicating how they got there. In this case we see that Strange studies up on things he is told that he shouldn’t but it feels like a leap for him to become so proficient so quickly. It’s not a huge issue but it’s definitely there.

Predictable as it is, the story does move along at a decent clip. It never feels like anything lingers longer than it should and it’s all very well told. There are even a lot of laughs that feel well placed. Cumberbatch absolutely nails the dry wit that goes with his character and there are plenty of good visual gags such as a levitating cloak that will bring back memories of the Magic Carpet from Aladdin.

The film is a visual feast from beginning to end. Colours pop off the screen to represent the various spells and there are some mind bending effects that put Inception to shame. The final fight in particular has great visual flourish and actually manages to be somewhat creative in the resolution.

Another thing that counts in this film’s favour is that it feels almost completely stand alone. There are a few references to the wider universe out there but none of those are relied on to make the story work. Doctor Strange is planted in the Marvel Cinematic Universe with relatively little effort and looks set to become a major part of it in the future.