Alexander Payne’s Downsizing offers an innovative sci-fi solution to the global overpopulation problem by shrinking Humans to around 5 inches tall.

A high concept idea like this should be right up my alley. I love exploring real world issues through a science fiction lens and the idea of shrinking Earth’s population so that they take up less space therefore leaving much more to play around with is certainly interesting. The film doesn’t bog itself down in the science of it all so no explanation is given for how it’s possible to shrink a Human being though the process itself is shown which adds some degree of realism to it as different steps are shown to highlight how life changing it is.

The problem is that the film fails to do anything with the concept; or more accurately it tries to do too much with it. There are hints of different issues that could be explored such as a loud mouth in a bar talking about the rights of the small vs. the rights of those who choose to remain their natural to name one example but the film fails to actually do anything more than pay lip service to these ideas.

Matt Damon’s Paul Safranek is the protagonist and takes us on his journey to becoming small. The film quickly establishes that he and his wife Audrey (Kristen Wiig) are struggling financially and looking for some way to better their situation. Becoming small is an attractive solution because the modest savings they have allow them to be worth millions in a community of smaller people. The decision making section of the film is handled really well as the implications of the decision are carefully considered as well as the impact that will be had on the family and friends of Paul and Audrey. There’s a particularly strong scene depicting their going away party that gives enough insight into the relationships to create an impression of what will be left behind and changed as a result. 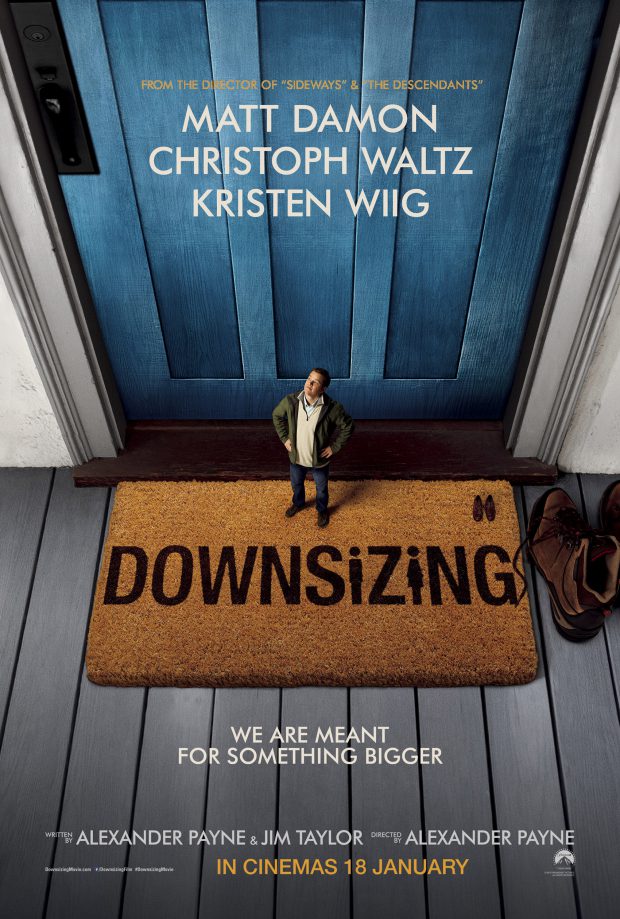 After this the film becomes something of a checklist of things that could be covered within the shrinking concept. There is a relationship torn apart by the decision that takes up some screen time but ultimately feels empty in its execution, an adjustment period to suddenly being 5 inches tall that comes and goes without much fanfare and a collection of other things that are raised but not fully explored.

The most bizarre thing is that the core concept becomes a non issue very quickly. Shortly after Paul shrinks himself down it pretty much disappears as an idea outside of an occasional reference here and there. Unsurprisingly Paul finds out that going through the procedure isn’t all its made up to be and the same issues still exist. There’s some coverage of class divides, poverty and a criminal underground but as with everything else the film isn’t really interested in exploring them. The inability to fully explore anything that is introduced makes for a really jarring viewing experience that feels like a complete waste of the concept and all the associated implications.

Paul ends up befriending a disadvantaged dissident named Ngoc Lan Tran (Hong Chau); a woman who was smuggled into his community and has to work really hard to make ends meet. It’s the sort of character who could appear in almost any film which does make the concept of being small easier to swallow as it connects the idea to something relatable. Hong Chau is really entertaining with her unfiltered speech and brutally honest attitude nicely contrasting Matt Damon’s more resigned performance. As an onscreen pairing they bounce off each other well and have a relationship that builds believably over time even if the story around them isn’t all that interesting.

Other actors fail to make much of an impression. Christoph Waltz does nothing new as Paul’s hedonistic neighbour but delivers an entertaining performance because that’s what Christoph Waltz does. His character could almost have been cut but he does bring some value to what would otherwise be really dull scenes and is responsible for moving the plot forward on a handful of occasions. Kristen Wiig vanishes fairly early on and the majority of the rest of the cast are basically cameos that capitalise on what people would expect from those actors. Neil Patrick Harris and James Van Der Beek are two examples of people who turn up for the purposes of a gag before disappearing entirely.

Visually the film is impressive enough. Any scene where normal sized people and those who have been downsized is notable and the giant every day objects relative to the small people is a fun novelty that keeps the premise of the film in mind when it has all but been forgotten. The design of the small person habitat is memorable in a sanitised corporate sort of way.

An underwhelming experience with a great high concept science fiction idea but a complete lack of focus. The best scenes are early on when Paul and his wife Audrey build up to becoming small as those scenes do the best job of explaining the concept, the implications and the impact it has on people. After this it becomes a list of ideas that are referenced but not explored in any depth. The shrinking concept all but disappears after a while as the film fails to tackle any of the issues it presents. The acting is solid across the board and there are impressive visuals but the overall experience is an onslaught of wasted potential.