The son of a noble family navigates a complex political landscape as he prepares for an increasingly uncertain future in Denis Villeneuve’s Dune.

Adapting Frank Herbert’s seminal science fiction novel has been nothing short of a challenge for a long time. The attempt by David Lynch enjoys campy cult status and other attempts have been met with mixed results so the source material gained a reputation as being one of the great unfilmable works. Naturally “unfilmable” is seen as a challenge by some so now we have Denis Villeneuve’s attempt.

He certainly has the resources at his command to make the best possible adaptation of the novel. The marketing may be shy to call this the first part of a planned two part series but the opening title card makes it abundantly clear that Dune is actually Dune: Part 1; right from the off it tells you this isn’t the full story which does the job of setting expectations to not have a complete experience. It may seem presumptuous considering that part 2 is yet to be commissioned at the time of writing but this being allowed to happen rather than having it condensed into a rushed singular outing is to be admired.

Boasting a massive budget and a talented cast, Villeneuve sets his sights on bringing Arrakis and the associated planets to life. In short he does a remarkable job; the world of Dune is rich, complex, functional, lived in and many other accolades you’d expect from great science fiction. The setting is realised through a combination of stunning production design, jaw dropping visual effects that are deployed perfectly, impressive characterisation and dialogue that manages to avoid falling into the trap of seeming like exposition. The depicted factions have their own unique visual stamp that neatly matches them to their briefly depicted planets. It all contributes to the idea of culture and history that extends far beyond the scope of the film. Dune is a story that takes place in a fully realised universe with this only being a small part of it. The expansive nature of what lies beyond provides fodder for the imagination and adds to that immersion.

Timothée Chalamet’s Paul Atreides as the focal character is the perfect gateway to elucidate some of the finer details as the viewer learns how things work as he does. He isn’t entirely a blank canvas as he lives in this universe so has a working understanding of the broader strokes but because of where he is in his development as the film begins there are lessons he must learn and responsibilities he must understand in order to take his place in the system his family are a part of. 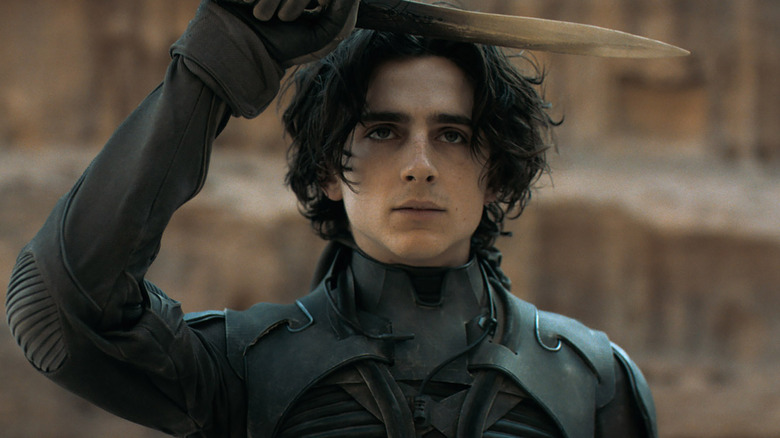 Ritual combat is about to begin!

Paul Atreides is an engaging character who believably develops over the course of the film. Timothée Chalamet’s performance is rich and varied with vulnerability and naivety defining him early on before the weight of expectation forces him to grow up more rapidly than he is comfortable with. No time is wasted defining his natural connection to Jason Momoa’s Duncan Idaho; a relationship founded on mutual respect with an implied history that shines through in how they interact. It’s notable that Paul loosens up most when around Duncan and further fleshes out his uncertainty around the expectations others have on him.

Another key relationship is with his mother, Jessica (Rebecca Ferguson) who follows closely most of the time, continually supports him and tasks herself with preparing him for his responsibilities. She is the concubine to Paul’s father, Duke Leto Atreides (Oscar Isaac) who is far too mired in the tense political situation to focus on being a father. Jessica regards Paul with affection and he returns it in spades; their relationship is consistently compelling with the power dynamic shifting depending on whatever the circumstances are at any given time.

Beneath the surface Paul is haunted by dreams of the desert dwelling Fremen with specific focus on the mysterious and alluring Chani (Zendaya – positioned as set-up for the second part rather than a major presence in this one-) who seems to call to him for reasons he doesn’t understand. The mystery of who she is, what the Fremen have to do with Paul’s future and how he has these visions remain unanswered but seeking answers drives Paul to take action and helps construct a character driven throughline to give the narrative some momentum. 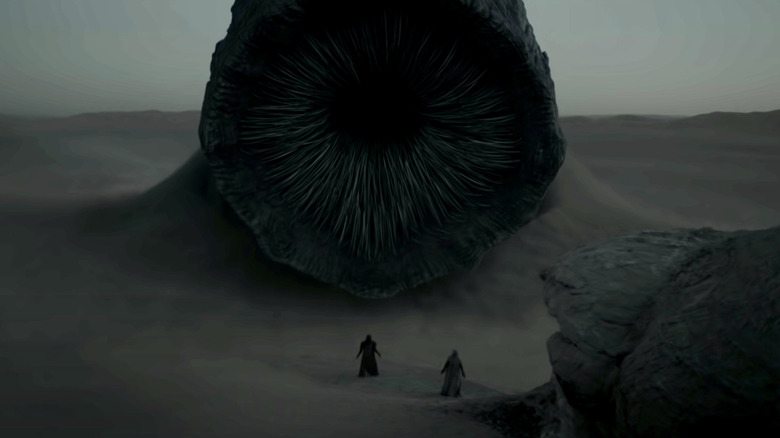 The star of the show

Dune favours world-building over storytelling which is both a blessing and a curse. The advantage is that Dune envelopes the viewer in its massive world and takes the time to show why it’s a setting worth spending time in. It immerses you in its politics, the affairs of its people, the mechanics of the different societies that exist and it’s all done very deliberately rather than clumsily throwing all necessary information necessary to follow the events. It’s unquestionably a dense world but it’s easy to follow provided close attention is paid to how Villeneuve delivers the information. It’s intricately built, expertly crafted and wonderfully realised to the point of true immersion. Dune is to be celebrated for crafting the setting the way it does.

The drawback is that the storytelling is lacking. Most of what is featured is in service of setting up the second part which means there’s very little in the way of payoff. Antagonists are introduced but remain background elements because the time for them to achieve prominence has yet to come, events begin to escalate but stop short of hitting the promised heights and character arcs abruptly stop in their tracks. Things do certainly progress to some degree but there’s an unfinished quality to the overall experience that is undeniably jarring. The end credits roll just as a turning point is reached with dialogue pointing out that things are just beginning as if to mock the audience who are left wanting more. As mentioned above expectations are set for an incomplete story but the majority of the payoff is definitely to be found in in the second part that is yet to be greenlit.

Shortcomings in the storytelling are most apparent in how much of the time is spent. A significant amount of dialogue points to Paul being embroiled in a chosen one narrative with questions around whether he is the one to lead an oppressed people to freedom. Without following through on this notion it’s unclear if Paul will be a standard messianic figure or if he has the potential to rise above the questionable trappings associated with that. This film fails to interrogate the fact that he is being set up as a white saviour even though it has opportunities to do so. There is also the hint at a critique of colonialism that fails to come to anything beyond the obvious commentary that it can only end in ruin for the colonisers; a point the film thankfully doesn’t labour but the exploration is disappointingly surface level with actual character opinions on it noticeably lacking. A second part can expand on these further but the omission in this one is glaring.

Characters often suffer in the midst of the sheer scale. Many play a specific part in the narrative as it plays out and don’t take on much life beyond that though the talented cast certainly imbue them with a great deal of personality which goes some way towards compensating for that. It isn’t bereft of emotional resonance though a lot of that is attached to Paul without much afforded to anyone else. This means that some deaths feel empty because the grounding doesn’t exist to make the loss resonate and time isn’t taken to allow Paul to reflect on why a loss impacts him. It’s not entirely an exercise in style over substance but it does often veer in that direction which threatens to undo the stellar work on display at times. 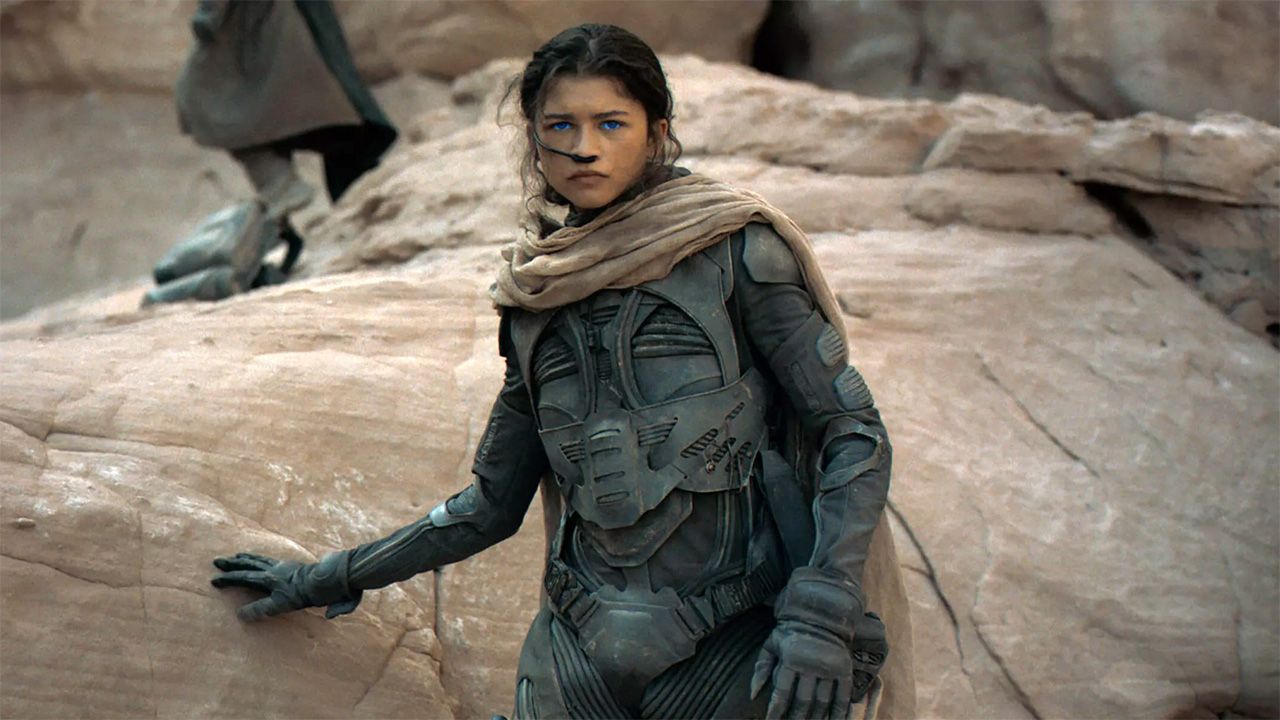 I’ll catch you all next time!

A stunning example of world-building and visual excellence that takes its time to craft a fully realised universe to tell its story. World-building is very much the main strength of the film with stunning production design, jaw dropping visual effects, impressive characterisation and dialogue that avoids falling into the exposition trap. Paul Atreides is a strong focal character wonderfully performed by Timothée Chalamet. His range is used well and his connections to other characters further flesh out the world. Having him learn the finer details of how things work along with the viewer doesn’t feel forced as context is still key in fully understanding. The film envelopes the viewer in its massive world and all the complexities it holds. Different factions and their planets have a unique visual stamp that functions as effective shorthand. Dune favours world-building over storytelling which is both a blessing and a curse. The advantage is that it takes its time to build the world rather than clumsily forcing in all of the necessary information but the drawback is that the story only really begins as the credits roll. There is very little payoff and some of the lingering threads point in potentially concerning directions such as Paul being potentially embroiled in a chosen one plot that positions him as a potential white saviour. The hint at a critique on colonialism exists but fails to come to anything due to the lacking of character opinions. It’s also light on emotional resonance which makes some of the character deaths feel empty. It’s not entirely an exercise in style over substance but it does often veer in that direction which threatens to undo the stellar work on display at times.