The scale of this event makes it tricky to commit to film since it took place over a relatively large period of time and involved many different moving parts to pull the evacuation off. Nolan gets around this by playing around with time in an impressive way. He divides the narrative into three main sections defined by different parts of the overall campaign and each following their own timeline. The land portion takes place over a week, sea takes place over the course of a day and air is only an hour. Effectively Nolan brings us three smaller films and stitches them together in a disconnected way while trusting the audience to be able to follow what’s going on.

It works really well for the most part. The audience has to keep it in mind throughout so that the transitions don’t feel so jarring. There are parts of the film where the action moves between day and night because of the disconnect so the narrative device has to be in the back of your mind throughout. 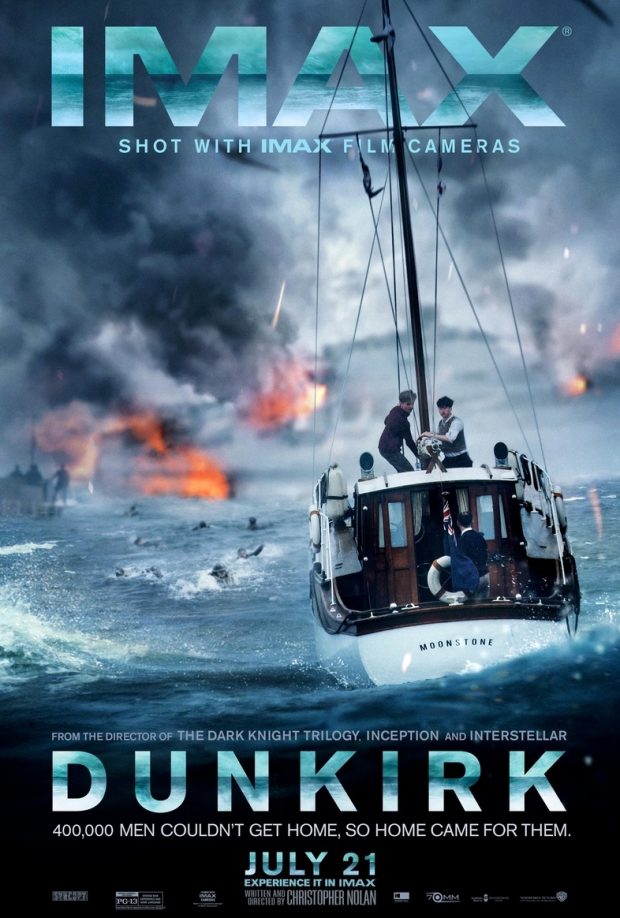 The cleverest thing about it is the points where these narratives connect. Events are seen multiple times from different perspectives with more insight supplied by the shift. One such example is answering the question of whether the pilot of a downed Spitfire survives. The scenes focusing on Spitfire pilot Farrier (Tom Hardy) are unable to supply that information as his view on the situation is very limited. By the end of the film it all comes together in a way that mostly makes sense.

Another thing the film does particularly well is build a sense of tension and dread through the use of sound. The deafening sound of plane engines heralds danger and gunshots are similarly terrifying because of how loud they are. This is combined nicely with the score that makes good use of a recurring ticking motif that adds to the general unease of the situation.

The execution of the action was a bit of a mixed bag. By far the most impressive sequences were the aerial dogfights that managed to be really tense and exciting. They play out like a procedural with a lot of attention given to tactics and other considerations like fuel consumption which creates a sense of realism about them and makes the pay off to the manoeuvres used in the cat and mouse game feel more satisfying. Nothing particularly stood out about the rest of the action as the depiction of boats sinking started to feel somewhat repetitive.

Dunkirk is somewhat unique in that the situation is more of the focus than the people involved. This allows the scope of what is being depicted to come through but it loses something in terms of investment. Outside of Kenneth Branagh’s regretful Commander Bolton, civilian boat captain Mr. Dawson (Mark Rylance), and Cillian Murphy’s shell shocked soldier rescued by him very little work is done to establish the people involved in any meaningful away. The actors all do an impressive job evoking terror through actions and facial expressions but there’s little reason to invest in them as characters beyond the fact that they’re in a horrific situation. The lack of dialogue does add to the claustrophobic terror being built but it means that many of the characters descend into a sea of faces placed at different points throughout the evacuation.

Visually the film is really impressive. I’ve talked a lot about scope and this film has lots of it. The sheer scale of the event comes through clearly and there’s an undercurrent of bleakness established by lingering shots on the devastation inflicted on the surrounding area. It allows the events to feel distant to those the film follows while creating a sense of dread as the enemy draws closes and the lack of German soldiers shown on screen adds a sense of terror to the enemy closing in.

A technically impressive film that makes good use of sound design and visual language to communicate the scope of the situation. The disconnected timelines solve the problem of too many moving parts and the way they periodically converge is impressively handled. Since the film focuses more on the situation than the people involved it means that the film suffers in its characterisation. So little is revealed about those involved that it’s difficult to invest in. The action depicted varies in effectiveness with the standout being the aerial battles but nothing else particularly stand out. Despite that the film does a good job of establishing terror and isolation with impressive lingering shots showing the devastation inflicted.