A tribe of cavemen challenge a Bronze Age civilisation to a game of Football -or Soccer- to prevent their valley from being turned into a mine in Nick Park’s Early Man.

In many ways Early Man feels like as much of a relic of a bygone age as the characters who inhabit the film. The entire film is a stop motion experience with characters brought to life by plasticine that is manipulated by hand. In this era of computer generated animation it’s refreshing to see something so old school made with care and attention. Charming touches like visible finger marks on the characters can be found throughout reminding us of the distinct human element and all the hard work that’s put into this. The design work put into the cavemen and their environment as well as the Bronze Age technology is stellar and worth seeing on its own. There’s a touch of the Flintstones to the way primitive versions of modern technology are presented which makes for a fun reference.

Unfortunately the story being told doesn’t match the effort that went into making the film. At its core the film is very much an underdog sporting story along the lines of The Mighty Ducks which means it’s fairly predictable and riddled with clichés such as montages and the obvious lowest point that the characters have to overcome. This structure is common in other non sporting movies as well but the script noticeably leans into those particular narrative crutches as if there’s a lack of understanding between homage and imitation. It’s competently handled though very predictable in the execution; the climactic match can practically be predicted down to the second. 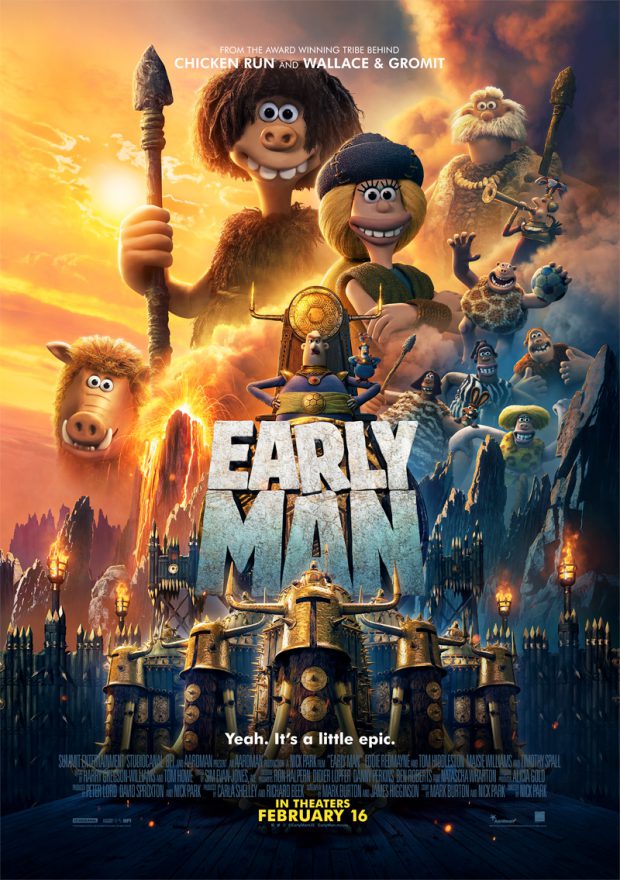 Nothing overly interesting is done with the characters either. Dug (Eddie Redmayne) is young and idealistic though very content with the customs of his people with no desire to move outwith the confines of their home. He does express interest in progressing to hunting larger animals than Rabbits which makes him the progressive member of his tribe and therefore the natural leader of the story. He’s the one to extend the challenge and try to corral his people into mastering the game of Football so that they can win the right to be left alone.

Dug is an endearing enough character with a decent vocal performance from Eddie Redmayne and I suppose that’s enough for a film like this. The other members of his tribe are featured throughout but never quite become characters in their own right. Performers like Richard Ayoade and Timothy Spall are largely wasted in nothing roles that amount to little more than background elements. It’s perhaps the natural consequence of having to make a team of 11 characters but it’s no less clumsy. Similarly Maisie Williams doesn’t quite rise above being necessary to the plot as Bronze Age defector Goona though she does have some great moments.

The villain of the piece is the real highlight. Lord Nooth (Tom Hiddleston) is the perfect blend of bumbling with the command of enough resources to make him a threat. Hiddleston puts on a comedic French accent that never fails to delight and the character is threatening enough in the context of the story. Lack of development of the members of his team makes it more difficult to invest in the conflict overall but as a focal point for audience hatred Lord Nooth does exactly what he needs to do.

It’s a very short film which means that it doesn’t outstay its welcome though it does lag somewhat in the mid section and the humour doesn’t always land as well as it could. I imagine there are many jabs at British Football that would make sense to the initiated though as someone who knows very little about the sport they largely went over my head. There are some really funny moments in there and a good mix of jokes along with slapstick so there is a definite attempt to cover all the bases here.

A solid if unremarkable film that doesn’t stray too far from the sporting underdog movie play book. The work put into making the film happen with stop motion plasticine manipulation is nothing short of remarkable but the story presented doesn’t match the work that brought it to life. Dug is an endearing enough character and the film gives him a clear goal as well as obvious antagonists for his tribe but the film fails to understand the difference between homage and imitation. Tom Hiddleston’s vocal performance is both excellent and hilarious as he plays a well written bumbling antagonist but the film fails to make proper use of him and the major beats can be predicted practically to the second. There is enough of a mix between jokes and slapstick humour which shows a definite attempt to cover all the bases and I suspect there are plenty of well intentioned jabs as British Football for those in the know but the experience is very surface level and not up to Nick Park’s usual high standards.