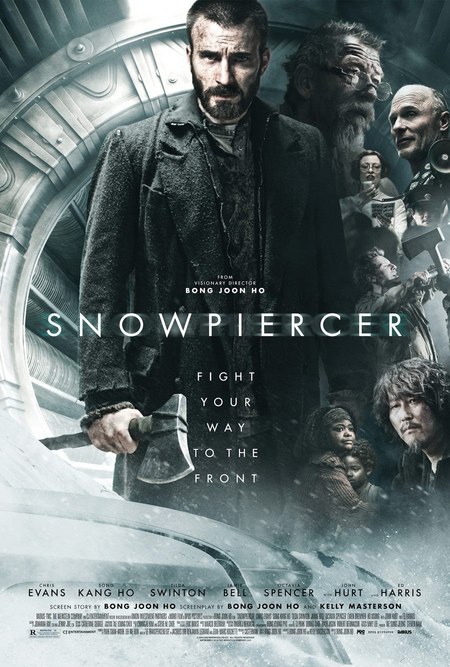 First of my comprehensive reviews of films I saw at the Edinburgh International Film Festival. I have covered all of these in far less detail on my daily roundups but now that it’s all over with I’m going back and looking at some of the films I felt were worth talking about. Generally I’ll do them in order of seeing them so I’m starting with Snowpiercer then will move onto Castles In The Sky and so on. Now that the admin is out of the way, onto the film. Snowpiercer is the English language debut of South-Korean director Joon-ho Bong (Mother, The Host –not the 2013 Stephenie Meyer novel adaptation) and features a world covered in ice after a catastrophic mistake causes Earth to plunge into a new ice age.

Those who survived live on the Snowpiercer, a massive train that takes a year to circle the entire globe and houses a cross section of humanity. As you might expect the lower class live at the tail end of the train and the upper class live towards the tip. The lower class are brutally treated, forced to subsist on protein bricks -made from something so repulsive I won’t spoil the shock reveal- and randomly taken from their families for purposes that the upper class scarcely choose to regale them with.

Naturally, in such a society revolution is inevitable and messy. The revolt is led by young idealist Curtis (Chris Evans) and his best friend Edgar (Jamie Bell) who are mentored by Gilliam (John Hurt), an old man with a personal connection to the inventor of the train. Their objective is a simple one – get to the front of the train and take control of the engine because controlling the engine means you have control of the train.

As they fight their way to the front of the train there’s a lot of great visual variety as they make it to each compartment. The tail section is dark, cramped and unclean which greatly contrasts with the bright, spacious and immaculate forward compartments. One of my favourites was when Curtis and his friends saw out of a window for the first time since coming aboard the train, it was painful for them to look at due to their eyes being adjusted to low lighting for so long. I also really liked the aquarium section and the school was great too. Visually the film is so wonderfully diverse that it keeps things interesting. It also made me wonder what was coming next as they moved closer to their objective.

On the surface the story feels a bit like fighting through the levels of a video game and I suppose structurally it’s very similar but I didn’t mind it as it made the story easy to follow. I thought the story was very well done as the film slowly built up the world as it went, letting the audience find out little pieces of information as time went on, something that most science fiction fails to do these days. I liked that the characters didn’t repeat information that they should already know to each other and let the audience be absorbed into the world through visual cues and making assumptions about certain things. I liked that certain things that we might take for granted have become extinct as the perpetually running train undergoes wear and tear over time adding a further sense of realism. The rest of it is told to us as the characters find it out, can’t fault this for world building.

The imagery used in the film is astounding, the desolate icy wasteland that was once Earth looks great as the train moves past the snow covered famous landmarks at breakneck speed. The above mentioned aquarium looks great and the design of each section of the train feels fresh and interesting, plenty of visual eye candy here. I loved the action sequences which were exceptionally well shot, evoking a cramped arena and showing intense, raw and unskilled combat. It all felt really fresh.

Chris Evans proves his acting abilities here as Curtis by giving a subtle and nuanced performance showing a man who has survived a brutal and difficult existence in the poor section of the train. There’s a monologue he has towards the end that is particularly haunting and touches on some really dark subject matter. Another cast highlight is Tilda Swinton’s over the top upper class representative who reminded me of Elizabeth Banks Effie from The Hunger Games franchise. There was something immensely watchable about this hammy performance. Mainstays like Jamie Fox and John Hurt do impressive turns in their roles as well as strong performances from Kang-ho Song and Ah-sung Ko helping to build a global cast of characters.

Overall, I really liked this film. It was a thought provoking, well paced and intelligent dystopian sci-fi movie with some striking visuals and strong performances. The story world is very well built and feels nicely lived in. Only real issue I had was with the ending which felt a little abrupt and left me with a lot of questions, it lets down what was otherwise an excellent movie. The first film I saw at the festival and a great start though.