It’s often said that the journey is more important than the destination, and it appears that Vince Gilligan would agree. The highly anticipated and much-hyped, El Camino (released 11th Oct on Netflix), follows in the footsteps of Better Call Saul, further expanding the universe of Breaking Bad, and answers fans’ questions about what happened to lovable loser-turned-meth-chef-turned-drug-slave Jesse Pinkman (Aaron Paul) after his escape from captivity in Walter White’s climactic swansong.

Writer/director Gilligan chooses to pick up right where Breaking Bad left off, with Jesse speeding away in the titular El Camino, just as we last saw him.  We then tail Jesse as he makes a desperate attempt to evade the law and escape to a new life.  Along the way he manages to rope in old friends (and fan favourites) Badger (Matthew Lee Jones) and Skinny Pete (Charles Baker), as well as encountering a few other familiar faces.  There are flashbacks to Jesse’s time in captivity, to remind us of the horror that his life had become at the hands of the gang of drug-pedalling white supremacists.  There’s even a western-style gunfight, as well as bittersweet references to happier times in Jesse’s life, recalling his relationships with Jane, Andrea, and Brock.  Aaron Paul deserves a ton of credit for this role, as he appears in almost every shot of the film, and carries the emotional weight of not only this entry, but brings all of Jesse’s catalogue of hardships to the table too.

Jesse’s quest to escape New Mexico and start a new life is wisely punctuated by a setup plot which includes another returning character from Breaking Bad, Todd, played by Jesse Plemons.  These sequences bulk out the present narrative about Jesse’s immediate escape, but also detail Todd’s incongruously casual treatment of his captive and introduce Jesse to the stash of cash that could pay for his flight from his old life.  This inciting incident, cleverly woven into the backstory of El Camino, adds depth to what is a relatively light escape plot for Jesse.  The stakes are obviously high, but the scope is noticeably smaller when compared to the kingpins and cartels, train heists and airline explosions that accompanied the epic rise and fall of Heisenberg.

There are enough nods and call-backs to Breaking Bad to please devotees of the original TV show, but El Camino does well to walk that tightrope, and never really feels like it’s straying too far into fan service territory.  Familiar characters like Badger and Skinny Pete add some levity to the proceedings and serve as a nice reminder of Jesse’s more care-free past.  His life towards the end of Breaking Bad was pretty bleak, and his prospects at the beginning of El Camino are not much better, so it’s fun to spend some time with the dopey stoners and enjoy the sort of inane banter that the pair bring to the table.  Particular highlights are Badger’s affinity for the cologne he gave as a gift to Skinny Pete: “Obsession’s the bomb yo, I got it for him for Christmas”, and Skinny Pete always having a burner phone close at hand: “fully charged and clean as a whistle!”  Don’t ever change, guys.  Also reprising roles are Jonathan Banks as Mike Ehrmantraut, and Robert Forster as Ed Galbraith, the unassuming vacuum salesman who moonlights as an extraction specialist.  Jesse had previously called upon Galbraith’s services in Breaking Bad, but had had a last-minute change of heart; this time around he knows he wants to disappear for good. 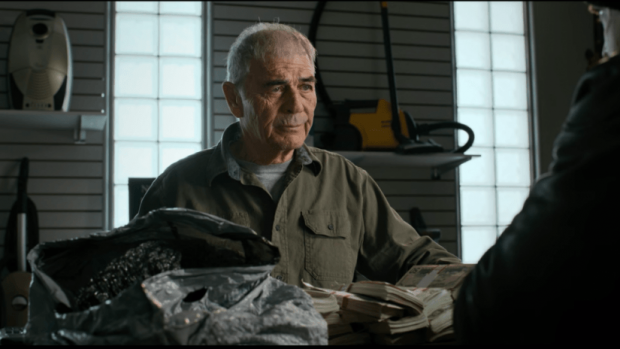 Sadly, Forster passed away on the day of El Camino’s release, but he will be fondly remembered for his contribution to this film, as well as the rest of his work over his 50+ years in acting.

Gilligan selects some of his favourite tools from the box in El Camino, ramping up the tension during several sequences that could have come straight from Breaking Bad.  The mystery of the money hidden in Todd’s apartment and Jesse’s desperate hunt for the stash feels very familiar, particularly because of the visual language employed by Gilligan.  His camera explores every angle of the apartment as it follows Jesse on his single-minded mission.  This ‘man with a task’ scenario is a Gilligan staple, as Jesse spends hours searching, coming so close to admitting defeat before arriving at an accidental breakthrough.  How many of Walter White’s schemes played out in the same manner?  Similarly, the encounter with the ‘cops’ cranks up the pressure, with Jesse crawling around the kitchen as if he were one of the kids in Jurassic Park hiding from the raptors.  Once Jesse’s discovered, and the fake cops know they risk blowing their cover, the three men must tiptoe around behind closed curtains to avoid Todd’s talkative neighbour.  Again, we’re back on well-trodden ground, as these are the sorts of edge-of-your-seat surreptitious shenanigans we used to love seeing Walter and Jesse get tangled up in years ago. 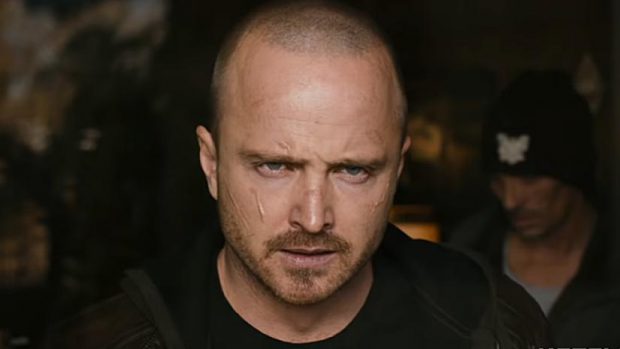 Believe it or not, this is the cleaned-up version

It’s been 6 years since the fifth and final season of Breaking Bad was appointment television, and the spinoff doesn’t suffer particularly for the time that’s elapsed between then and now, but perhaps a rewatch would be of benefit to viewers before they tackle El Camino.  There’s no way it works without the precursor, nor should it, but the two are so intrinsically linked that El Camino feels almost like a feature length episode, acting more as a coda to the series than anything else.

After the elaborate schemes and felonious action of Breaking Bad, El Camino is a simpler affair. Quieter, less flashy, it’s a fleet-footed story of a man on the run.  Here Jesse is evading the law in the shadows and dark corners of Albuquerque, in direct contrast to the way in which Walter White ostentatiously hid in plain sight.  It is undoubtedly satisfying to see a man who was swept up by people and events around him finally take control of his own life.  And we know Jane would’ve wanted it that way.

One of the most anticipated sections of El Camino sees Bryan Cranston’s Walter White reunited on screen with Jesse, in a flashback to one of their earliest forays into the meth game.  For fans, it’s a truly delightful moment just to see the pair together again.  This is Walt and Jesse at their most innocent (relatively speaking), before Walt’s descent to the depths of Heisenbergian evil.  He’s still in schoolteacher mode, attempting to dispense advice to his young protégé, telling Jesse, “you’re really lucky that you didn’t have to wait your whole life to do something special”.  This is a pretty meta moment between Cranston and Paul, as the former found fame later in his acting career.  It could also be cautionary, as unlike Bryan Cranston, who has managed to spread his success across many projects, Aaron Paul runs the risk of being inexorably linked to his Breaking Bad character, El Camino being arguably his most successful job since its precursor ended.

A solid entry into the Breaking Bad canon, and a satisfying ending for a fan-favourite protagonist who rode some incredibly tough times.  For better or worse, this is less a movie, and more a feature-length coda to season 5.  All the Breaking Bad hallmarks are present, and El Camino certainly lives up to the series’ high standards.  Cameos and references abound, which will no doubt please long-time fans.  Vince Gilligan’s script manages to balance humour and pathos, which may have seemed a tall order considering how dark things got by the end of Breaking Bad.  Did we absolutely need to be told this story?  Possibly not.  Are we happy we got it thought?  Definitely.  And that’s what should matter.  El Camino is not a conclusive end to our Breaking Bad journey, just the welcome start of a new chapter for Jesse Pinkman.