Dominic Toretto and la familia are back in another high octane ridiculous global romp in Justin Lin’s Fast & Furious 9.

I’ll preface this by pointing out that I’ve never been a fan of this franchise. I’ve seen every entry but I’ve never been all that engaged by it so I went into this fully expecting that it just wouldn’t be for me. Does that mean I should be reviewing it? Perhaps not but in the absence of anyone else to do it I’m covering it.

The plot -such as it is- has Vin Diesel’s Dominic Toretto and Michelle Rodriguez’ Letty pulled back into the world of crazy spy hijinks after trying to create an isolated life together with Dom’s son. Dom’s long lost brother Jakob (John Cena) reappearing inspires him to come out of retirement for one more mission -other than the upcoming two more “one more mission” movies- to settle this old score. Family is a theme common to this franchise with the audience being beaten over the head with it at every opportunity and this entry is no different in that regard.

F9‘s approach is slightly different as the core conflict is Dom’s blood family coming into conflict with his found family. Ignore for a moment the appearance of Jordana Brewster’s Mia into the mix. Flashbacks detail the breakdown in Dom and Jakob’s relationship as well as offering something of an origin story for how Dom came to define what he calls his family. The flashbacks are overblown and tedious for the most part with them seeming to exist only to provide an excuse for the film to acknowledge the franchise’s street racing roots. Any time F9 cuts to a flashback sequence the pacing is stopped dead in its tracks and the audience are forced to witness a bland short story about the two brothers coming to be on opposing sides. It does little more than add to a massively bloated running time.

The present day plot involves Jakob on a global search for a MacGuffin that could be used to end the world as we know it. Any of the particulars beyond that are unimportant as it only exists as an excuse for la familia to get involved in increasingly ridiculous car based action sequences all over the globe -also in space- rather than being anything the audience is supposed to pay attention to. Investment is a serious problem as the movie fails to make a case for why anything that is going on matters which makes it difficult to engage with any of it. Added to that are narrative backflips designed to enable as many franchise cameos as can be crammed in. This also slows the pace constantly making F9 a movie that takes far too long to do very little.

Ridiculous action sequences are the bread and butter of this franchise and it certainly delivers in that regard. There are a number of them each more absurd than the last. A chase across a minefield and a geographically challenged pursuit across Edinburgh numbering among them. There are sci-fi magnets, drones picking up cars in mid air, stunts that pay no attention to the laws of physics, punch ups, gun fights and many more. The variety is certainly appreciated. There’s plenty of creativity and they’re fun to watch by themselves but they are completely devoid of tension or stakes due to the characters never actually being threatened at any point and the film drags when attempting to deliver plot between them. 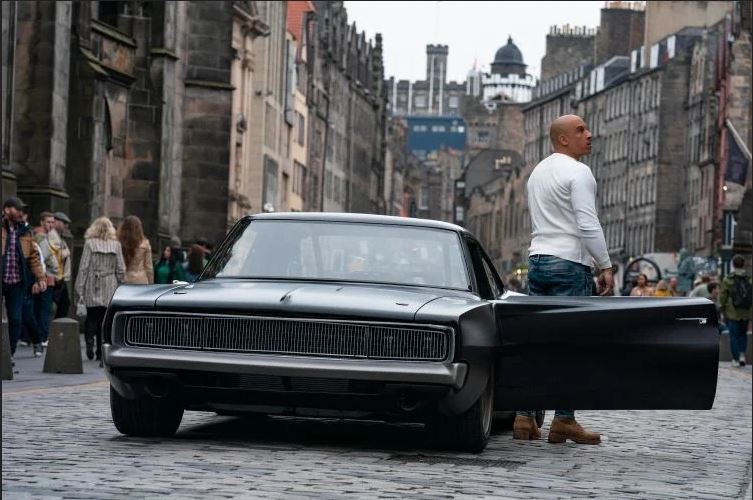 Edinburgh’s layout is strange in this universe

Vin Diesel remains an unengaging presence. His inability to emote constantly lets him down with Dominic Toretto’s disaffected attitude being at odds with the deep emotional turmoil he is supposedly experiencing. Every line delivery is flat despite his distinctive deep voice, any attempted display of emotion fails to be believable and his presence sucks the energy out of most of the scenes he’s in. He and Michelle Rodriguez bounce off each other well enough but it’s clear the bulk of the hard work is on her end. Tyrese Gibson and Chris “Ludcaris” Bridges are excellent as the comic relief -that is to say more comic relief than everyone else- with Tyrese Gibson in particular drawing the biggest laughs.

John Cena is unfortunately very flat as a villain. Despite the abundance of flashbacks the present day portion fails to capitalise on that antagonistic relationship. Cena has proven himself capable in other roles especially where his comedic ability is embraced but here he’s a generic tough guy with a chip on his shoulder. He doesn’t appear much either and shares very little screen time with Vin Diesel which adds to the failure to sell this connection. Cena’s performance makes his confidence and skill believable but he doesn’t register in the way the film needs him to.

This film continues what the previous entries have firmly established; an unflinching commitment to being exactly what it wants to be. F9 fully embraces this and makes no apologies for it. Those involved in the franchise know what it is, know why people like it and know exactly how to deliver what is expected. If you’re a fan of what the franchise has to offer then this film will likely be everything you want it to be but if, like me you struggle to engage with it then this entry won’t change your mind and that’s okay. 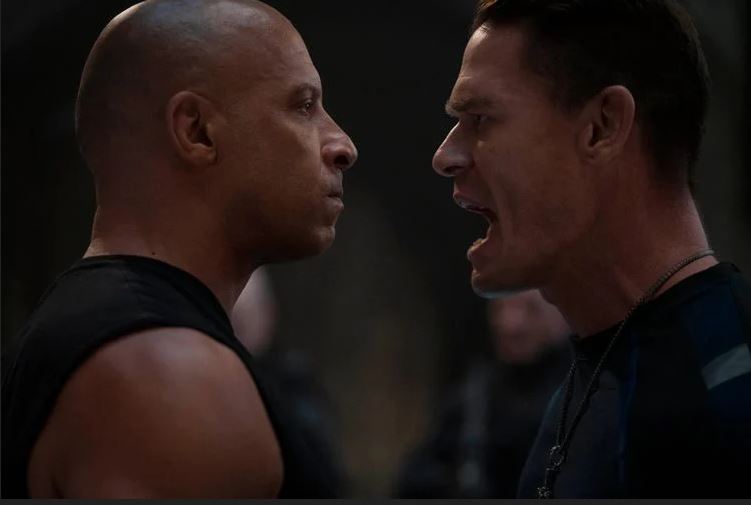 The loudest brother is the dominant brother

An unapologetic continuation of exactly what the franchise wants to be with delightfully ridiculous action and a flimsy plot that will satisfy hardcore fans but won’t change the minds of the uninitiated. The theme of family continues to be explored in this entry with Dominic Toretto coming into conflict with his blood brother as they race across the globe to find a MacGuffin. The plot isn’t important even though the film spends too much time trying to explain it with overlong tedious flashbacks and a present day narrative that fails to be engaging. The action remains impressive, creative and appropriately ridiculous though there’s no reason to invest in any of it due to the uninteresting plot. Vin Diesel’s screen presence and lack of ability to emote continues to be a problem with him sucking energy out of any scene that he’s in. John Cena is wasted as a villain who barely appears, shares very little screen time with Vin Diesel and doesn’t play to the comedic strengths he has exhibited elsewhere. As with many of the other entries in the franchise it knows exactly what it is, why people love it and what it needs to do to achieve it. Fans will likely be delighted but those who struggle to engage won’t have their minds changed.