Setsurô Wakamatsu’s Fukushima 50 tells the true-life story of a nuclear meltdown and the team who saved Japan from the biggest nuclear disaster in history.

In 2011, Eastern Japan was hit with a 9.0 magnitude earthquake and subsequent powerful tsunami, disabling many of the reactors at the Fukushima Daiichi Nuclear Power Plant. Back-up generators kicked in, but the damage had been done, setting in motion a ticking time bomb. This true story considers some of the many perspectives of the team who came to be known as the Fukushima 50, who for more than 3 days worked tirelessly to prevent an event that had the potential to be 10 times more devastating than Chernobyl. 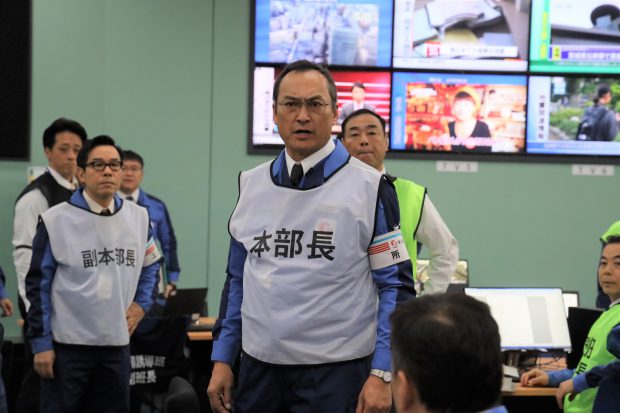 Ken Watanabe portrays Masao Yoshida, the only non-fiction character of the film.

Almost a decade on, director Setsurō Wakamatsu (The Unbroken / Snow on the Blades) wastes no time and quickly sets the pace, boldly throwing the viewer straight into the initial disasters Japan faced before decelerating to consider some of the many difficulties faced by the individuals of the Fukushima 50. Of the many workers, the film focuses particularly on protagonists Toshio Izaki (Kôichi Satô) and Matsuo Yoshida (a fiery Ken Watanabe), both leaders of their nuclear plant teams on and off site who try to coordinate a time pressured response whilst facing a seemingly unending number of meddling government officials and corporations who all present barriers to the team’s attempts to save the day. Their frustrations and despair at times are truly believable, (even if some of the corporation officials they’re up against are over-characterised and slightly extra), and will have you rooting for them to succeed.

It’s hard to ignore that the film is based on a book of more than 90 compiled interviews. From nuclear plant workers to the former Prime Minister Naeto Kan, all here have a voice. The challenging task to project so many different viewpoints in 2 hours is met with various degrees of success from director Setsurō Wakamatsu. It was not necessary to bring in American characters on the phone to the President of the USA, resulting in a rather cringe-like response from the viewer and immediate removal from the true story – those dealing with the impending danger on the power plant.

With the mood changing rapidly, and often at times quite peculiarly, it can be hard to keep track of all that is happening, or even read all of the text on screen. The pace is a little jarring and disjointed; at times, the urgency of the situation is palpable, whilst otherwise a little disconnected – again the 90+ voices here all rushing to come forward to tell their side. The writer and director do a great job at creating tension between the plant-workers and the government, and in the slower emotional parts, but there is a strange awkward middle section that sits in a strange space uncomfortably in-between those. Some sentimental moments of the workers taking joy in treating themselves to a snack knowing it may be their last, and the emotional weight of sending a last message home are portrayed beautifully and with real sensitivity, but the bizarre inclusion of the US Air Force team, with some recounting their childhood near Fukushima wipe that out. The film would fare better without them. 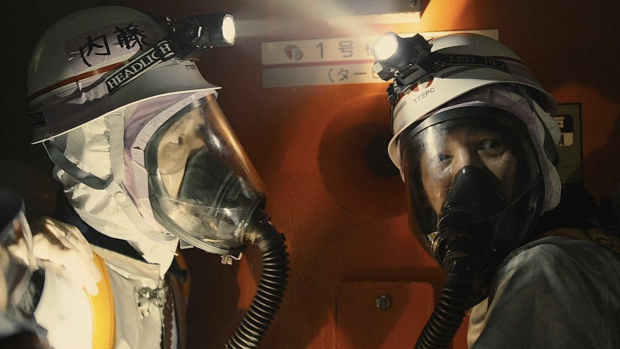 The film triumphs in the heated depictions of the workers trying to avert an even larger scale disaster.

Moments of the film are incredibly gripping; the formation of the ‘suicide squad’ and their experiences in trying to prevent total meltdown of the reactors are the best executed sequences, and allows for an incredible insight into the remarkable team of workers who chose to stay and face the consequences of humankind’s decision to ‘play God’ in harnessing nuclear technology.

Writer Yoichi Maekawa and director Setsurō Wakamatsu appear to be overwhelmed by the wealth of multiple perspectives, which shows in the muddled narrative, making it at times hard to follow but they do manage to document many of the challenges faced by the teams on and off site, and some moments are portrayed powerfully by the two leads, Ken Watanabe and Koichi Sato who hold the movie together with their ‘Suicide Squad’.

Overall, Fukushima 50 overstretches just that little bit where we begin to lose characters, and some appear close to a caricature level. That it’s a true story just makes it that much more remarkable. Not making space for a character to explain what level of radiation is good or bad could leave a few audience members behind and given that the only non-fiction character was the late Masao Yoshida (Ken Watanabe), it would have been an easy addition to create someone to make some things a little clearer for those of us not in the know. With the inclusion of one non-fiction character, we see some of the characters become almost a caricature, who would truly not look out of place in a Roy Andersson film – a compliment usually if we weren’t discussing a true life natural disaster.

Ultimately though, just below those flaws lies an incredible and important story of resilience and unity, celebrating the heroic Fukushima 50 – much needed in a time overwrought with challenges. It will no doubt encourage the viewer to immediately search what became of Fukushima, and those who prevented the biggest nuclear disaster of the Anthropocene. 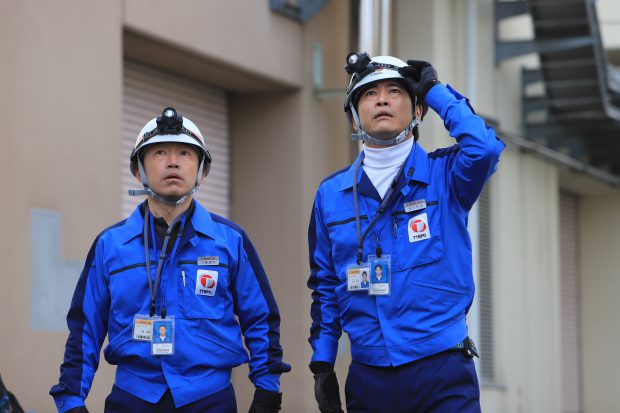 The film thrusts you straight into the disaster.

An at times thrilling depiction of this true life event, a little slow in places and some unnecessary appearances from the US, but overall worth a watch to understand the event that could have brought devastation to millions of people. Nail-biting moments coupled with some glimpses of brilliant emotive storytelling ultimately win over everything else not quite right with it.

FUKUSHIMA 50 WILL BE RELEASED ON ALTITUDE.FILM AND ALL DIGITAL PLATFORMS ACROSS THE UK & IRELAND FROM 8 MARCH