Ghost in the Shell

The popular and iconic anime receives a Hollywood adaptation in Rupert Sanders’ Ghost in the Shell.

I’ll start by saying that I’ve had no exposure to Ghost in the Shell in any form before this movie so I’ll be completely unable to make any comparisons to the anime. I am aware of the impact it has had on films like The Matrix and how influential it has been in general but beyond that my experience of this film is entirely based on how it works on its own.

In short, it works reasonably well as an action film with something extra going on beneath the surface. The story as presented is nothing to really get excited about but it is easy to follow and it enables some exploration of identity as a concept along with extreme projections of the role of technology in our lives. There’s a lot to unpack and the film is at its best when it deals with more complex themes.

We explore this world through the eyes of Major (Scarlett Johansson); a character who doesn’t know her past and is somewhat uncertain of who she is. The film opens with a particularly stunning sequence of her being literally rebuilt but the change goes so far beyond the physical. It is quickly established that she was in an accident and that her brain was put in a new body. Right away we are told that the “Ghost” is another word for the soul and the “Shell” refers to the body. It’s a good start because we are provided with a memorable visual right away and Major’s arc is heavily hinted at. 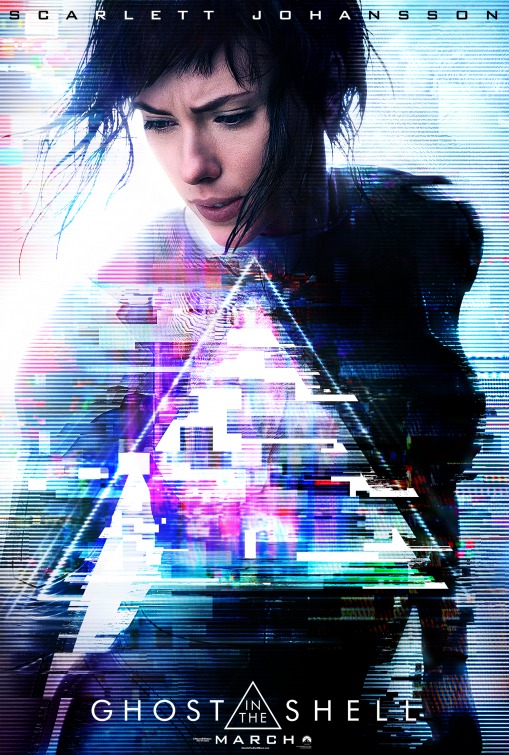 The world itself looks great and is well established. Extra points have to be given for the film not using exposition to explain how the world we live in ended up this way. It uses the story and context to build its world gradually as the film progresses and the film is all the better for it.

I found the world of the film itself to be a really interesting. The role of technology and how people choose to enhance themselves with various cybernetic upgrades is constantly referenced and affects many of the characters in different ways. There’s a good contrast between these appearing both beautiful and grotesque. Many of the implants are unnerving to look at and it automatically conjures opinions on why people would choose to do that to themselves.

This all feeds into the theme of identity that runs throughout the film. Major has been rebuilt and is functionally a completely different person which seems to be a common thing in this particular society. The film explores her growing unease with her situation as the truth is slowly revealed to her.

Scarlett Johansson is fine in this role and does a good job portraying the growing sense of discomfort that Major feels. There’s nothing about her performance that suggests she was the only choice to play this role but she takes to it well and is very capable in the action sequences. As leading ladies go, Johansson is establishing herself as a natural one and films like this prove that.

The film looks absolutely stunning. Most of it is lit in a harsh neon glow showing the abundance of advertising in this world and it all feels lived in. We don’t know the history but it’s clear that there is one and the society seems to work on an impressively broken level. It’s easy to be immersed in this world as a lot of effort is put into the small details. There are also a number of really creative action sequences that are really impressive to look at.

There are some issues that bring the experience down. I didn’t find the story strong enough to hold my attention throughout and there are severe pacing issues that make the film feel like it takes too long to get to the interesting parts. Breathing room to explore the world, characters and themes is important but the script doesn’t make good use of the room it creates. As such it feels overlong and the central conflict doesn’t kick in until late on which means that it’s difficult to explore it in any level of details. I was surprised at how short the film is as it feels much longer than it is.

A solid film that does a good job of world building and has some interesting themes to explore. The role of technology in society as well as people’s lives is well established and Major is a good vehicle to explore that as well as the theme of identity. Scarlett Johansson does a good job in the lead and is very capable in the action sequences but it wasn’t a role that only she could play. The film looks absolutely stunning with impressively visualised action and beautiful visuals throughout creating a harsh and lived in world. There are some pacing issues and the central conflict takes too long to happen but on the whole the experience of watching is a positive one.