Tree Gelbman faces another round of time loop shenanigans when she finds herself stuck reliving the same day once again in Christopher Landon’s Happy Death Day 2U.

Happy Death Day was a nice surprise. I didn’t see it until fairly recently and was really impressed with it. The cast was good, it was self aware enough to forgive the reliance on obvious influences and it was a lot of fun in general. Did it need a sequel? Not really but then again what does?

As Happy Death Day 2U begins, it looks to be a repeat of the first film except with a different character. This may be designed as playful nod to sequels that basically remix the first film and call it a day. Ryan’s (Phi Vu) time loop doesn’t last long before Tree (Jessica Roth) enters the plot and recaps the first film for Ryan to explain what’s going on. The film focuses on Tree again as she is thrust into a situation where she has to deal with an altered version of the loop she escaped in the first film.

The most notable thing about this film is the complete change in both tone and style from the first entry. Happy Death Day was a slasher film with a high concept gimmick where Happy Death Day 2U is a sci-fi comedy with some light horror elements. This change proves to be a good thing because it allows for the exploration of different themes and different scenarios while expanding the cast of characters introduced in the first film. 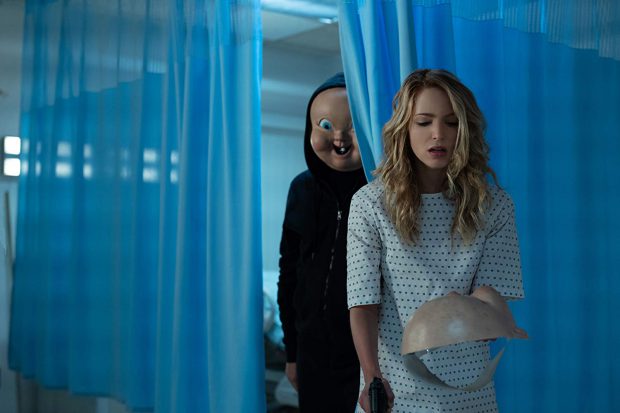 Ever wanted a day to just end?

Tree continues to be an engaging lead. For a female horror film protagonist she’s very much the anti-Screa Queen as she faces danger head on with confidence and skill. That’s not to say she is never afraid but that fear doesn’t prevent her from acting which makes her uncommon as horror protagonists go. Jessica Rothe plays her really well with excellent comic timing, necessary emotional depth and a real confidence in the character she’s playing. She more than carries the film with her effortless charisma and inherent likeability.

The time loop mechanic is very much in play here though it is used very differently. This has advantages and disadvantages. One major advantage is that the events of the first film can be revisited with a fresh spin on them allowing for the inclusion of new characters and an overall expansion of the the universe in a way that feels organic. The major disadvantage is that the killer plot and horror elements feel somewhat disconnected from the main narrative. It’s almost as if someone in charge was afraid to break the link and felt it a necessary inclusion.

As I said above there’s a much greater emphasis on comedy this time round and for the most part it lands though there are points where things feel just a little too over the top to be believable. There’s a sequence towards the end that goes too far and clashes too much with the rest of the film. I won’t say what it is but you’ll know it when you see it.

The sci-fi trappings were a lot of fun to play with and are largely used to good effect. A clear influence is Back to the Future Part II which is frequently referenced throughout in case the references to it are too subtle. Wearing the inspiration on its sleeve so clearly sets up viewers in the know for what they’re about to experience. This film isn’t as clever as its inspiration but there’s a lot to recommend here.

On a deeper level the story presented here allows Tree to develop along different lines. Her arc in the first film was about becoming a better and less selfish person which is somewhat repeated here but in a justifiably different way. Tree being a college student suggests that she is somewhat protected from difficult life choices that come with true adulthood. The plot here presents her with a very difficult choice where she will definitely lose something no matter what she chooses. It’s a clear message that there won’t always be a truly happy ending. It’s also very realistic that Tree would fall back into her previously selfish ways because profound life lessons don’t always hold up to future testing. She draws on the greater sense of empathy she gained in the first film to help her come to the difficult decision and the execution of this is really moving. There are a few strong and powerful emotional moments in here and Jessica Rothe proves to be entirely up to the challenge of delivering these. She is definitely one to watch in the future.

Another notably impressive thing about this film is the attention to detail. Anyone watching would be forgiven for thinking that this sequel was the plan all along. It takes seemingly innocuous details from the first film and turns them into significant plot points, expands the background and offers an answer to a question that nobody asked. I’m sure the last thing on the minds of viewers was how Tree got stuck in a time loop in the first place but when it’s used to deliver an entertaining sci-fi romp it’s not such a bad thing. 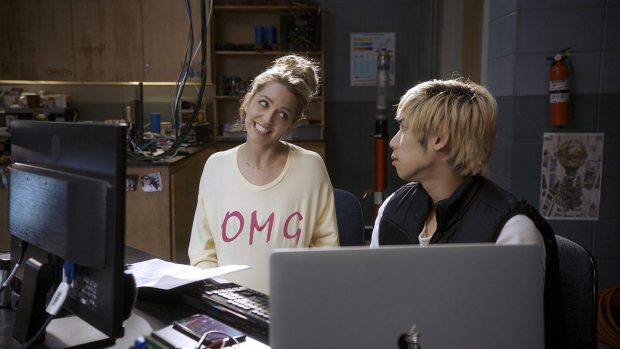 I will express my feelings entirely through clothing

A strong sequel that completely changes direction from the first film and delivers a really entertaining sci-fi comedy that expands the universe in really fun ways. The film playfully nods at the audience who might expect a rehash of the first film with some slightly remixed elements and makes good use out of the unnecessary explanation for Tree being stuck in a time loop. It makes that explanation part of the story and uses it to expand the universe. Tree remains an engaging protagonist with a strong arc reminiscent of what she went through in the first film but in a justifiably different way. Jessica Rothe once again does a great job with great comic timing, emotional depth and a consistent level of confidence in the character she is playing.

The time loop mechanic is used differently which has its ups and downs. It’s good to see a fresh spin on the events of the first film but the setup leaves the killer plot and horror elements feeling largely extraneous. Despite that the greater emphasis on comedy and playing around with the sci-fi elements makes for an entertaining story and there’s a strong message about transitioning into adulthood coming with difficult choices that don’t always have wholly happy endings. The difficult choice Tree has to make is really well established and allows for some wonderfully played emotional moments. Notably there is excellent attention to detail here that takes seemingly innocuous elements of the first film and turns them into significant plot threads which makes it appear as if this sequel was the plan all along.