The better of Stephen King adaptations tend to be from stories absent of supernatural horror (such as The Green Mile, The Shawshank Redemption, Misery, Stand by Me and Gerald’s Game), so to get people on board with one driven entirely by such an aspect was quite an achievement for 2017’s IT. Upon release, the film quickly gained a popularity and notoriety that extended so far beyond its natural core audience of horror fans that it was cited amongst films deemed “post-horror” or “elevated horror” or one of half a dozen other labels applied by people who don’t understand the genre and are only just learning that there is more to it than attractive half-naked twentysomethings being indiscriminately slaughtered while being chased through the nocturnal woods. The film’s success, along with being based on one of King’s most well-known works, meant that the follow-up of It Chapter Two had its work cut out before it even begun.

To recap: in the town of Derry, Maine a group of seven misfit teens who christened themselves the Losers Club become aware of an entity that emerges from hibernation every 27 years to feed on the townspeople – primarily children – by manifesting itself as a person’s fears, and also Pennywise the Dancing Clown (Bill Skarsgård), a turn-of-the-last-century circus freak, because reasons. After defeating the creature, they swear an oath to return to the town as adults and destroy it once and for all if it turns out to still be alive and re-emerges. Which it now has. 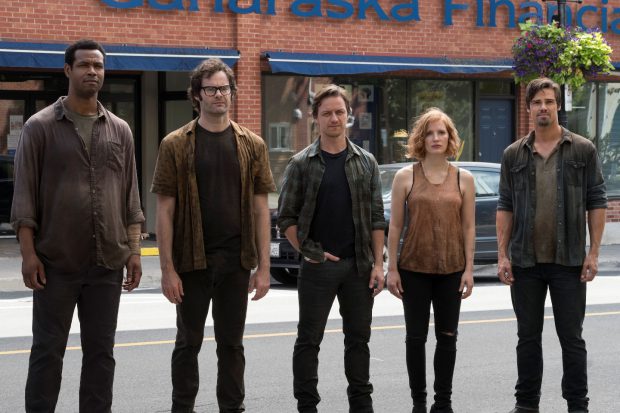 The narrative shifts the bulk of the focus onto the adult versions of the children we got to know (to varying degrees) first time around. Replacing the largely unknown teenagers from the first movie, the now-adult Losers consist of writer Bill (James McAvoy), fashion designer Bev (Jessica Chastain), architect Ben (Jay Ryan), comedian Ritchie (Bill Hader), risk analyst Eddie (James Ransone), accountant Stan (Andy Bean) and librarian Mike (Isaiah Mustafa), the latter of whom is the only one who stayed in Derry and remembers the events of that fateful summer almost three decades ago. Despite the variance in star power of the cast, they function well as an ensemble, no character’s presence outshining any other’s and each one’s experience no more significant to the plot than everyone else’s.

Director Andy Muschietti doesn’t have a large body of work – aside from It there isn’t much more than his feature debut Mama and the short film of the same name from which it was expanded – but an unfortunate habit he has swiftly developed is an overuse of unnecessary CGI. A prime example this time around is during the scene of the group’s initial re-gathering that features a particularly chilling moment of an ominous message being spelled out, and before its impact can sink in it is immediately overshadowed by a chaotic set piece consisting of SFX critters emerging from fortune cookies.

Some of the effects moments lead to another of the film’s principal issues, that of a distracting tonal dissonance. It’s sometimes difficult to ascertain if a particular moment is supposed to be funny, or if it was intended to be scary but in the finished product came off as so ludicrous it couldn’t help be humorous; Evil Dead vs Evil Dead II, if you like. One moment in particular that sees a character become drenched in black bile being vomited over him in slow motion while soundtracked by to the dulcet tones of Juice Newton’s “Angel of the Morning” is a pure Sam Raimi moment that the man himself would have been proud of. More generally, the addition of humorous moments in what is supposed to be a chilling horror movie only serves to distract from what it should actually be. With many of the scare points being nightmares or hallucinations, a couple of key moments are initially unclear to actually be occurring in reality, and so the impact of them initially fails to register. In some other nitpicking, some of the references could have done with being a little more contemporary, and while it could be a meta comment on the plethora of painfully dated cultural reference points that riddle King’s work, that’s likely giving it too much credit. 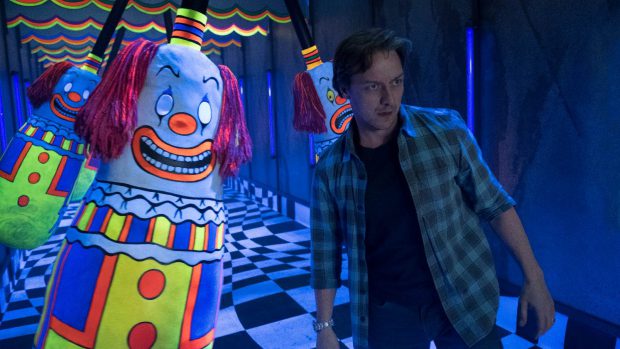 Welcome to the house of fun.

It is a very large book – coming in at 1,138 pages it’s King’s second-lengthiest after the sprawling saga of The Stand – but even with half the plot already dealt with by the first movie, the film manages to spin out a run time that approaches three hours, eclipsing the first outing’s comparatively lean 135 minutes. It splits the narrative into a trio of distinct acts, but between the opening of the re-gathering of the Losers and their acknowledgment of the reality of the danger they have to face, and the lengthy climax where the humans face a shapeshifting quasi-immortal fear demon, is a lengthy section where they are each required to wander alone through the town lost in childhood memories to locate an object symbolic of themselves and their childhood for use in a mystical ritual to defeat Pennywise. As well as splitting up the cast who are at their most compelling when together, this also utterly kills the momentum and sense of urgency the opening section did so well in establishing, leaving the viewer impatient for each character’s experience to be ticked off so the story can get back on track.

Performance-wise, the most memorable are James Ransone, who balances Eddie’s hypochondria with his need to overcome his fear and nervousness about everything since he is a vital facet of defeating Pennywise; and Bill Hader, who mixes the comic timing for which he is known with a sense of pathos he displays as the eponymous protagonist of black comedy series Barry, especially in moments that tacitly reference Ritchie’s closeted homosexuality, an original addition not seen in the novel. 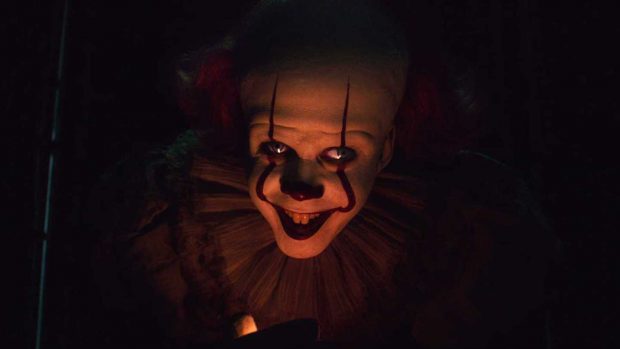 Pennywise on the hunt.

The book was written at a time in King’s life when he was drunk and high pretty much 24/7, but like with JK Rowling and The Goblet of Fire, it’s clear his editors had stopped trying to rein in rambling off onto numerous unnecessary tangents that the adaptation wisely discards. These include some nonsense about Maturin, a cosmic turtle who vomited up the universe, and a particularly disturbing scene where the younger incarnations of the characters engage in a pubescent gangbang that for some reason allows them to find their way out of the subterranean labyrinth of Pennywise’s lair. Also excised are some of the book’s sub-plots such as those involving Bev’s abusive husband and Bill’s actress wife, preventing a lengthy story from becoming even more overcrowded, but some fat still remains. The re-appearance of sadistic bully Henry, whose fate was left ambiguous first time around, along with his encounters with various characters just feels like a distraction, while an isolated scene involving Bill buying back his childhood bike from a greedy pawnbroker has no payoff other than to provide King himself with a self-indulgent cameo, which is particularly egregious given that he has stepped away from appearing in adaptations of his own works for a number of years.

For a film titled for the otherness of its antagonist, Pennywise himself has far fewer appearances than you might have thought. He emerges in various guises throughout the film such as a seven-foot witch (portrayed by that other lanky CGI freak specialist Javier Botet), a Paul Bunyan statue come to life, and the living corpses of dead bullies from the first film, but the iconic image of the sinister clown doesn’t appear nearly as often. He occasionally crops up hunting children, in places like hiding behind the shadowy bleachers at a baseball game or in the UV-lit tunnels of a sinister fairground funhouse, but otherwise remains something of a nebulous presence until the final act, where his malevolence is unleashed full force.

Despite being a horror movie based on one of the most famous works of an acknowledged master of the craft, It Chapter Two simply isn’t scary enough, and for a film that has a too much of many things, to end up lacking in aspects that actually frighten you is more than a little disappointing. 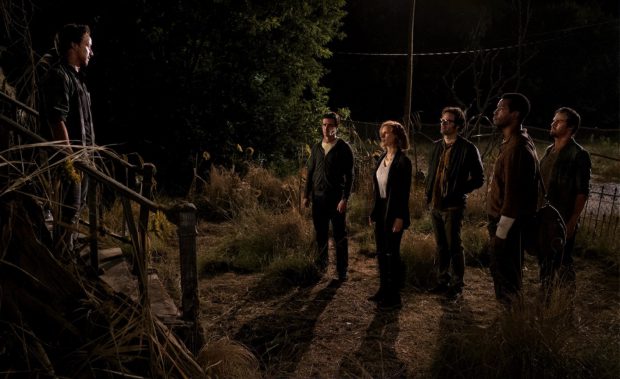 Facing fears in the dark.

It Chapter Two is a decent enough follow-up to its predecessor, but unfortunately not one that lives up to its potential, nor reaches the heights of primal dread previously induced. Strong performances keep you engaged and invested in the safety of the central ensemble, and if nothing else, the film continues to prove that horror can reach a mainstream audience.