Jack Reacher returns in Edward Zwick’s Jack Reacher: Never Go Back and finds himself on the run from the law with a framed Major.

I enjoyed the first Jack Reacher film more than I thought I would. It was well paced, had some memorable moments and was reasonably clever in its own way. I know that Tom Cruise is pretty much the opposite of the character described in the books and I understand why that would annoy people but as a film I thought it was really well done so I was looking forward to seeing if a sequel could build on this.

In some ways it does but in more ways it doesn’t. Tom Cruise is really good in this role and you get what you expect from the guy. He conducts himself very well in the action sequences where he -presumably- does his own stunts and carries himself with an attitude that fits the character nicely.

In terms of his character there is supposedly more depth here as he has the lingering question over whether he fathered a child years earlier. He investigates this young girl who ends up coming along for the ride because the possibility of her being his daughter is enough to put her in the cross hairs.

The intention is for Jack Reacher; a man who is usually confident in every decision he makes to question those decisions and the choices he made in his life. Is his chosen existence as a drifter a good way to live or could he have chosen another path? All of these are good questions and the film does touch upon them but not in any way that has any real weight. It translates to some longing looks from Cruise then the film moves onto something else. 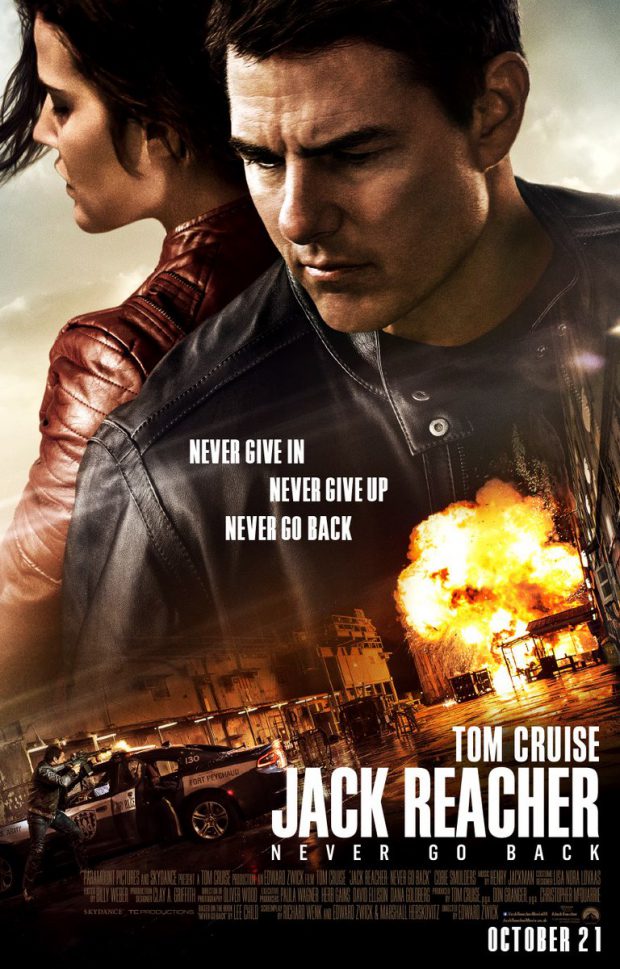 Samantha (Danica Yarosh); Reacher’s potential daughter is fine as characters go. She’s your standard petulant teenager with a difficult upbringing. This naturally makes her street smart in some ways but this is undercut by some really stupid decisions that she makes that she already knows will bring the people trying to kill her right to her.

As with any potential paternity story; Samantha has traits that remind Reacher of himself. Her first line echoes Reacher telling someone he doesn’t like being followed and throughout there are little hints dropped that they have similar personalities that might could mean they are related. The question is answered at the end of the film and I won’t spoil what that answer is but it’s something that lingers in the background and doesn’t add a lot to the story.

The villain of the piece is fairly underwhelming as well. Patrick Heusinger plays a Hitman on their tail who seems like a decent physical threat but falls into idiot bad guy territory one too many times. He disappears for much of the film which makes it easy to forget about him and when he does appear there isn’t much to him other than his physicality.

Cobie Smulders is the real star here. She has had limited opportunity to stretch her legs as an action hero outside of some limited chances in the Marvel movies and proves herself more than capable here. Her character is fairly well developed with a hard edge due to years of battling sexism to reach the position she’s in and is immensely proud of what she has achieved.

Her relationship with Reacher is interesting as they don’t get along for a very large part of the film. Circumstances have forced them together but she feels that he constantly undervalues her skills and gets in her way. In some ways this translates to a lack of chemistry between them but the story uses this to its advantage.

Smulders is great in the action sequences but she doesn’t get to participate in enough of them. I would have liked to see her be more involved in the overall story which would have put her in more of the sequences but the focus remained on Reacher which doesn’t fully take advantage of Smulders’ obvious skills.

The story is a fairly mixed bag. At times it is very difficult to follow because there are far too many moving parts. By the end of the film I wasn’t entirely sure what was going on and was just waiting for the whole thing to end. The first film did so well because it was a tightly paced detective story that had everything more or less make sense by the end but the detective element was massively downplayed and only existed on a superficial level. There were no standout moments that made me marvel at Jack Reacher’s unmatched skill when it comes to reading people or assessing a situation. It’s a shame that this film feels so much more generic than the first.

A disappointing follow up to an engaging first film that ignores much of what made it so enjoyable. Tom Cruise is good in the role but any hints at development of Jack Reacher as a character come and go so quickly that they are fairly meaningless as a result. The whole potential parenthood plot was a good opportunity for him to reconsider his life choices but there is no depth to it so it comes across as something of a waste. The villain is similarly underwhelming and leaves no impression in his limited screen time.

Cobie Smulders is the real star and proves herself to be more than capable in the action sequences while still playing an interesting character. The story itself is also underwhelming as there are no moments that show how impressive Reacher’s ability to read people or assess a situation can be. It’s basically a generic action film that has a character called Jack Reacher in it.