The first John Wick was one of my favourite films of that year and after recently rewatching it I would definitely stay it stands the test of -the admittedly short- time. There’s almost nothing to it but it’s beautiful in its simplicity with a bigger world hiding just beneath the surface.

Sequels have to justify their existence by going bigger or adding deeper plot to make the world feel like something worth revisiting. John Wick: Chapter 2 does both in equal measure with action sequences that astonish and more development of the intricate society of assassins that the titular character is a part of.

The story is really simple and picks up pretty much where the first one left off. John Wick is still on a mission to avenge the death of his dog and the theft of his car. An excellent opening sequence resolves this and the film dutifully progresses from there. Wick finds himself in the crosshairs of every assassin in New York City after an expensive price is put on his head and he has to fight against those he considers his peers to survive. Honestly, is anyone really watching this for the plot? I for one was just looking for an excuse for action and the plot does enough to deliver that. 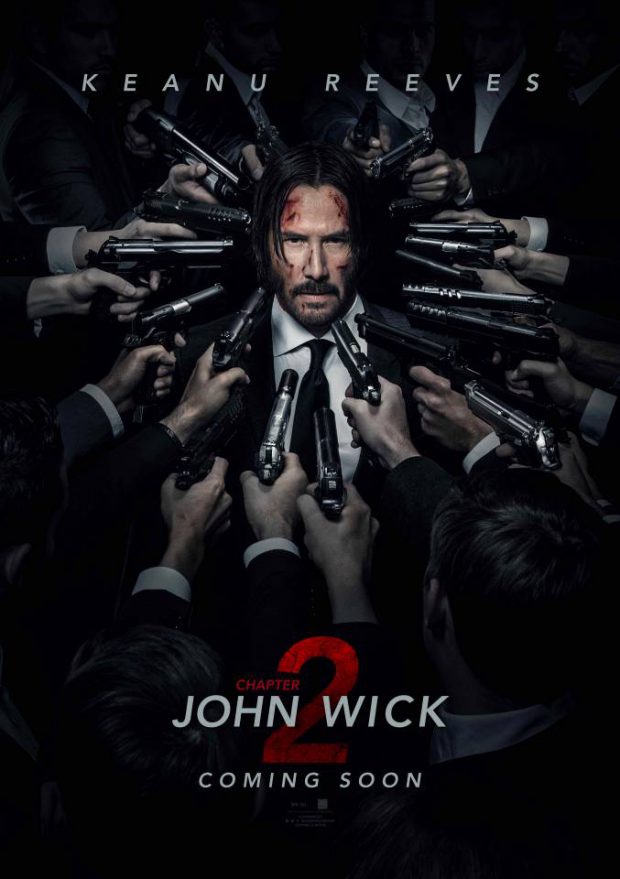 Beneath the surface there is a rich and fully formed world that we only get glimpses off. We get an idea of the inner workings of this clandestine organisation but only in ways that go along with the story that is being told. This is fine because any more than that would have been unnecessary exposition getting in the way of the action. The world is fleshed out enough to keep me interested and add fuel for expanding should there be more sequels.

This world building does come at a price with a large section of the film feeling very slow. All of it is fairly interesting but not interesting enough to spend as much time developing as the film does. There are some entertaining scenes in there such as a montage of Wick gearing up but other than that it felt like killing time before the insanity could begin.

John Wick himself is a fairly simple character. It is well established in both films that he is eager to live a quiet life even if people won’t let him do so. He gets back into “the life” in the first film for revenge and this film has him forced back into it after it is made clear that coming out of retirement isn’t something that could ever be temporary.

Keanu Reeves is somewhat limited in range when acting so this kind of character suits him well. He doesn’t have to emote very much and much of who he is can be seen in the way he behaves rather than how he interacts with people. It’s a good job because Reeves has far more talky scenes than he did in the first one and some of them are very difficult to watch. John Wick isn’t one for one liners but he’s also not one for long conversations.

Other members of the cast appear and disappear as needed but don’t play especially deep characters. Ian McShane successfully adds an air of suave mystery to Winston; the head of the organisation and Laurence Fishburne is great in his brief appearance. Beyond that most of the other characters let their actions speak for them. Ruby Rose and Common come across as physically formidable opponents and Riccardo Scamarcio does an impressive turn as Wick’s main target throughout the story.

Now onto the action. In short it’s great! Reeves has excellent and believable physicality which makes John Wick feel like an unstoppable powerhouse. There’s none of that irritating rapid cutting and shaky cam that dominates a lot of lesser action films to show off how fluid and dynamic the fight sequences really are. We see a good mix of gun play and hand to hand combat that ranges from martial arts to simply throwing people down stairs. It’s visceral, exciting and takes place in some really picturesque arenas. Naturally it’s incredibly violent as well but I never found it to be over the top because it’s just so much fun to watch. I can’t say enough good things about how the action was handled in this film and I would even go so far to say it’s one of the best action films I’ve seen in years. This will definitely become a feel good watch once it’s available to consume at home. For now I’ll settle for it being the best action I’ll see this Valentines Day.

An excellent action film that builds on the success of the first film by deepening the world the film inhabits. We learn a lot more about the organisation that John Wick is a part of and how he fits into it which sometimes causes the film to drag but doesn’t overly impact the quality. John Wick is a pretty simple character and suits Keanu Reeves’ limited range really well. There are a few talky scenes where Reeves is unable to keep up but nothing that upsets things too much. The action is brilliantly executed and is devoid of this rapid cutting shaky cam nonsense that you’ll find in lesser action movies. Keanu Reeves has great physicality which makes all of this believable. It’s just a blast and definitely the best action I’ll get this Valentines Day.