Legendary assassin John Wick is on the run after being declared excommunicado from the organisation he was once a part of and has to survive being hunted in Chad Stahelski’s John Wick: Chapter 3 – Parabellum.

The John Wick franchise has been a rare treat in the action genre. So many badly executed action movies are released that it might be easy to forget what a good example of the genre looks like. John Wick more or less came out of nowhere and impressed with its slickly choreographed brand of brutality with John Wick: Chapter Two continuing that high standard. All eyes were on the third entry to see if the trend could continue, 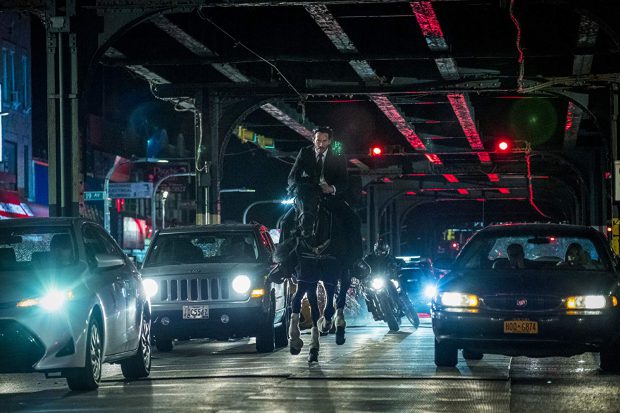 I’m on a horse

In short, it definitely does. John Wick: Chapter 3 – Parabellum is as intricately crafted as what came before it and delivers an impressive variety of action sequences designed to dazzle the audience. Normally in a film like this you can comfortably expect one or two major set pieces that are effectively supposed to be the selling point. Everything builds to them and the marketing is focused on promising that they will be the highlight. That isn’t the case here as most of the action sequences could serve that purpose. It’s impressive to see just how much variety exists in the various sequences. We get hand to hand combat with random objects creatively used as weaponry, John Wick on a horse being chased by motorcycles, vicious dogs attacking assailants and creatively staged gunfights to name a few.

Of course it’s not enough to simply have these sequences as they need to be done well. Everything about the various sequences is beautifully crafted in every aspect from the choreography to the camera work. This franchise along with Mission: Impossible should be held as the gold standard of western produced action movies. Keanu Reeves fully commits to the complex fight choreography and the result are dazzling. The best part is that the fights don’t feel like staged encounters designed to play out a certain way; they feel like real fights where the combatants are fighting for their lives. It works so well because a lot of work is put in to make it appear as if the combat isn’t choreographed. I can only imagine how hard that is to pull off but it’s deftly accomplished with the odd look of panic or periodic mistakes that heighten the tension. This is also enhanced by the growing sense of exhaustion that Reeves put across suggesting that constantly fighting to stay alive is taking a significant physical toll on him. This is aided by excellent direction making these sequences both coherent and immensely satisfying.

There isn’t a single dud here as far as action sequences go though the climactic sequence does run a little long and it starts to become noticeable that John Wick doesn’t appear to be taking any actual damage which does lessen the tension somewhat. It’s far from a deal breaker and is still immensely entertaining but it could probably have been truncated somewhat. My personal highlight was John Wick’s team-up with Halle Berry’s Sofia who keeps pace with him and adds variety using her highly trained canine companions. I wouldn’t be surprised if there are talks about giving Sofia a spin-off after this as she definitely makes a strong impression and Halle Berry does a great job. 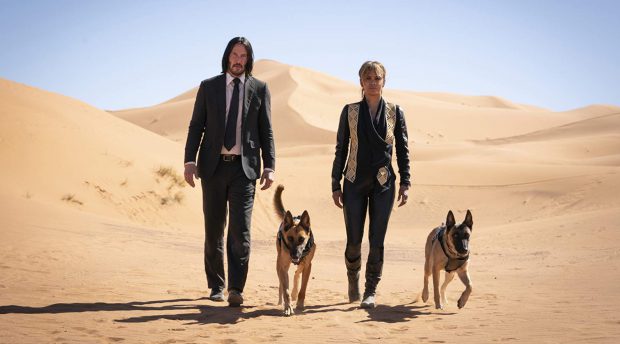 The story mostly exists to provide reasons for the action sequences to happen which isn’t necessarily a bad thing. This outing picks up where the second film left off with the $14 million contract on John Wick’s life about to go live therefore creating ample justification for him to be frequently attacked. Those opening moments do a great job of building tension as John Wick has limited options at this point as his prior resources quickly dry up. As the film progresses work is put into expanding the mythology as well as delivering limited insight into John Wick’s past through Anjelica Huston’s The Director. It isn’t something the film spends a lot of time on but there’s certainly some attempt to at least suggest where he got some of his skills.

There is a bit of a lull somewhere in the middle when John Wick wanders through the desert looking for someone who can potentially remove the price from his head. It doesn’t slow the film down for long and has the potential to go somewhere interesting but it ultimately proves superfluous at a later point and could have reasonably been removed with nothing being lost.

This film boasts a different sort of antagonist in Asia Kate Dillon’s The Adjudicator. She represents the bureaucracy of the organisation John Wick was once a part of and goes about investigating decisions that were made in the previous films from the point of view of how they stack up against protocol. Basically she questions everyone who may have provided him assistance in the past and punishes them accordingly. Asia Kate Dillon’s “by the book” demeanour and dispassionate line delivery works really well in building her as a credible threat and she matches with the likes of Laurence Fishburne or Ian McShane really well.

There aren’t many people who would say that Keanu Reeves is a good actor. His range appears to be limited and he has delivered some comically bad performances over the years but there are certain roles that suit him and John Wick is certainly one of them. He doesn’t have much opportunity to emote and when he does he largely fails to do so but his behaviour always seems consistent as he is fully focused on the task at hand. Reeves takes full ownership of this role and very much lets his actions do the talking for him. In essence John Wick is a character crafted to highlight Reeves’ strengths and he never fails to be engaging because of this. 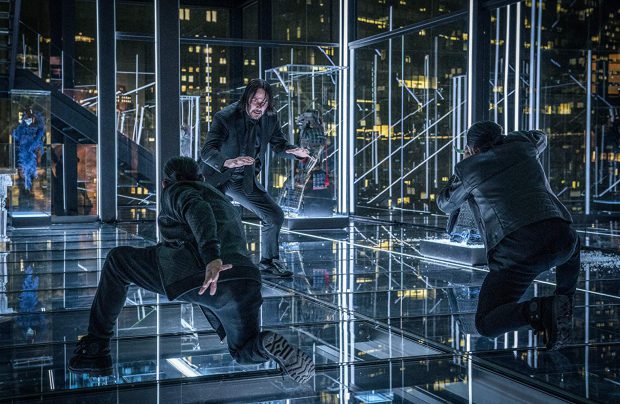 A beautifully crafted and immensely entertaining experiences that cements this franchise among the gold standard of western produced action cinema. The action sequences are really well put together from the choreography to the camera work and boast a great deal of variety throughout. Keanu Reeves fully commits himself to the complex fight choreography and the excellent direction compliments this to make the sequences coherent as well as fascinating. The story only really exists to provide reasons for the action sequences to exist though there is expansion of the mythology and limited exploration into John Wick’s past as well. There is a lull in the middle that proves to be superfluous but it doesn’t derail the experience.