A group of adventurers embark on a grand quest to find a magical secret in the heart of the Amazon in Jaume Collet-Serra’s Jungle Cruise.

Making a film out of a Disneyland ride could reasonably raise a few red flags considering the shallowness of the source material but doing so isn’t an inherently bad idea as there’s a lot of potential associated with venturing into the depths of the jungle on a magical quest.

The gateway to the adventure is the plucky Lily Houghton (Emily Blunt); a free spirited botanist with no desire to conform to expected gender norms associated with the First World War time period that provides the backdrop to the film. She’s obsessed with finding a magical MacGuffin known as “The Tears of the Moon” and no amount of risk will dissuade her from embarking on this question. She takes her less than worldly brother MacGregor (Jack Whitehall) to the Amazon where they meet Frank (Dwayne Johnson); a jungle tour guide who can take them to the location of the MacGuffin they seek.

There’s a lot to be said about an old fashioned adventure story where characters have to traverse great distances and deal with a lot of trials in pursuit of some lost treasure. It’s an easy framework to use as a starting point and the promise of adventure is always an exciting one. Jungle Cruise makes very good use of this by characterising the Amazon as a mysterious and dangerous place that hides many secrets. An early sequence has this played for laughs with Dwayne Johnson’s Frank scamming clueless tourists by manufacturing threats as he tries to swindle money out of them but it proves true as the film progresses.

Frank is immediately characterised as someone who knows his surroundings well, lives his life by the seat of his pants and enjoys pushing people to their limits. His motivation early on is shown to be earning money quickly to dig himself out of debt though more is revealed about him and his history at a later point. Johnson more than pulls his weight with his effortless charm and charisma that makes even the terrible jokes Frank is fond of telling come across as endearing. He also manages to add heft to the hidden depths his character is eventually shown to have while maintaining the adventurous tone that the film hangs itself on.

Emily Blunt is also impressive as Lily. She has a great dynamic with Dwayne Johnson with their confrontational back and forth providing plenty of entertainment. The beats of her being intelligent while Frank constant underestimates her are repeated throughout most of the film but as the basis of their back and forth it works well enough. Lily is shown to be capable if a little reckless and incredibly impatient. It stops just short of being painful to watch with Emily Blunt’s natural likeability keeping the character engaging. The romantic angle that crops up between Lily and Frank feels incredibly forced and was altogether unnecessary considering how well the friendly ribbing was working.

Lily’s brother MacGregor starts out as being the standard incapable nuisance who will be useless in pretty much every given situation but ends up becoming more capable as time goes on. There is a particular standout moment he shares with Frank where he admits to being gay that is delivered earnestly and doesn’t come to define the character by itself. As a trio Frank, Lily and MacGregor are plenty engaging with each of them occupying a particular role in a familiar yet workable dynamic.

The villains are where the film falls a bit flat. Jesse Plemons as Prince Joachim; a Prussian Aristocrat after the MacGuffin because he believe it will secure a German victory in the War isn’t featured enough to be the level of threat the film needs him to be and fails to rise above being a pedestrian antagonist when he does. He is deployed at particular points to heighten tension but there is nothing between the surface to draw on. Paul Giamatti’s Nilo is a villain of sorts who technically gets the adventure started by holding a debt over Frank’s head but as with Prince Joachim he is barely featured and actually disappears for most of the running time.

There are a number of impressive set pieces that make great use of the jungle setting. The threat level feels very low for the most part but it’s in keeping with the focus on adventure rather than peril. This does mean that there is very little that will stay with you but some standout sequences include a tense traversal of rapids and a daring escape from a German submarine. None of it feels unique but it’s perfectly serviceable and they are well executed. The visuals are very heavy on the CGI but it doesn’t detract much from the experience as it adds into the larger than life feel that the film is clearly going for. 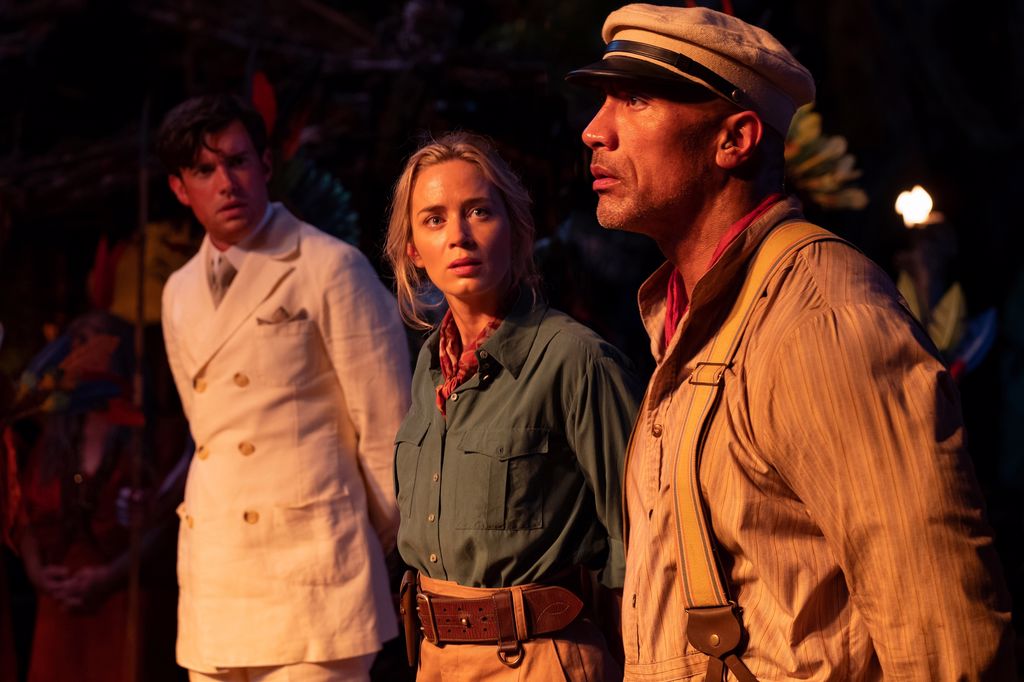 About to get into a sticky situation

A fun and entertaining old school adventure with engaging characters. Dwayne Johnson carries the film well along with Emily Blunt. Their dynamic is really strong despite a forced romance and the MacGregor character adds into what amounts to a strong trio. The film falters massively with villains with the two of them disappearing for long stretches so as to never appear all that threatening. Some of the set pieces are impressive even if very few of them will stay with you and fail to feel unique but they are well executed. The visuals are heavy on CGI but it doesn’t detract much from the experience.