J.A. Bayona’s Jurassic World: Fallen Kingdom takes audiences back to the island one last time as the dinosaurs face a second extinction because of an erupting volcano.

I wasn’t really a fan of the spinoff/sequel/reboot Jurassic World because it relied too heavily on referencing the landmark Jurassic Park instead of telling its own story. It stunk of a franchise revival that had nothing new to say and failed to recapture the same magic by copying material brought to life by far more talented people. With that in mind I wasn’t keen on seeing a sequel to that film especially when the marketing made it look like another film where people run away from dinosaurs in a jungle.

Imagine my relief when this film tried to inject something new into the franchise at least on a visual level. Yes there are still the scenes of people running away from dinosaurs in the jungle but this time there is also a volcano to add extra layers of threat. This part of the film takes up less than half of the running time before moving onto an attempt at gothic horror as the characters run away from dinosaurs in an expansive mansion rather than a jungle setting.

It may not sound like a massive change and it really isn’t but it’s enough to make this film feel fresh and sell the notion that the franchise can still deliver in its fifth instalment. The second half of the film is a lot better than the first half because that’s where the ideas and the philosophy start to come into play. Ever since the first film there has been an overriding theme of the arrogance of man being in direct opposition to nature. Every instalment features at least one Human character who think they know better than those that have come before them and learned the hard way that nature isn’t something that can be permanently contained. As the films have went on these characters became more villainous rather than misguided giving audiences a clear villain to oppose rather than the more complex John Hammond who simply let his excitement blind him to the obvious flaws with his idea. Unlike the first film this outing isn’t really interested in discussing these ideas in any detail but it does pay them enough lip service to encourage the audience to spare a thought.

Rafe Spall’s Eli Mills is the greedy opportunist ready to exploit dinosaurs for financial gain in this film and his presence leaves a lot to be desired. It’s obvious from his introduction what way his character is going to go and Rafe Spall plays him with a cartoonishly villainous glint in his eye that betrays his true intentions early on. As a mouthpiece for an alternative point of view he falls flat but as a catalyst that makes the plot progress he does the job well enough. Part of the problem could be his lack of screen time though he was really poorly written when he did appear so adding more scenes likely wouldn’t have helped. 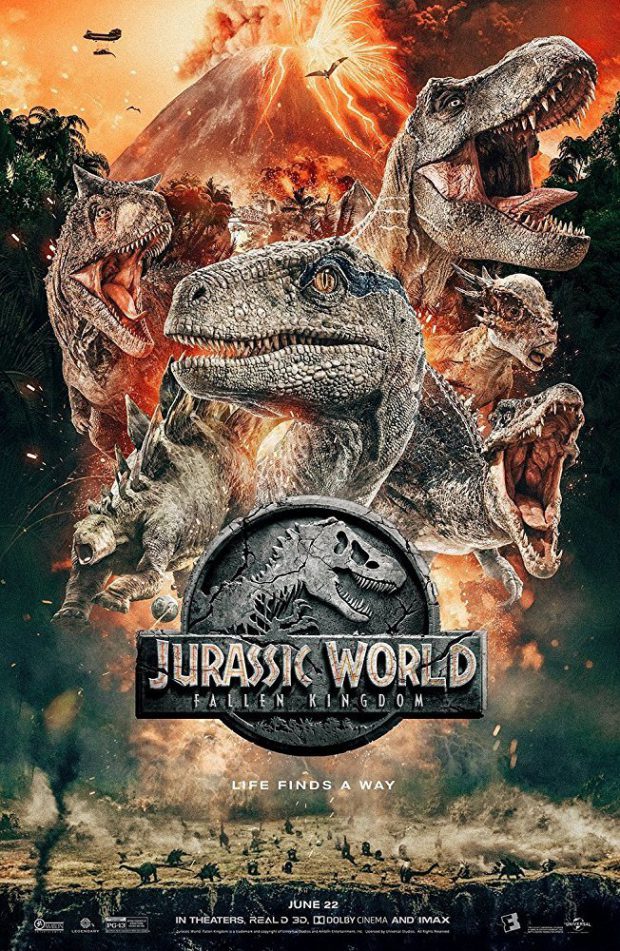 Faring a lot better are the returning Owen (Chris Pratt) and Claire (Bryce Dallas Howard) who serve as the characters the audience can root for when they’re tormented by the prehistoric animals. Chris Pratt is pretty much the same as he always is so if he is someone you like in this type of role then you’ll get a lot out of it. He carries the action well and is charming enough to override the character’s more obnoxious tendencies most of the time. Bryce Dallas Howard is far better used than in the previous film with a lot more personality, a more action driven role and the addition of sensible footwear. Claire is fairly well written having learned a great deal from her own mistakes in the previous film and using those lessons to help her grow as a person. It also helps that Bryce Dallas Howard and Chris Pratt have engaging chemistry so they are always enjoyable to watch together with a very natural relationship that helps carry the slower parts of the narrative.

Franklin (Justice Smith) and Zia (Daniella Pineda) are new additions to the cast who are mostly one note in their purpose. Zia manages to be the more entertaining with some great lines and scenes but Franklin comes across as irritating very quickly. Thankfully neither of these character takes up too much screen time and are mostly deployed effectively at key moments to perform a very specific function.

The young Isabella Sermon impresses as a young girl named Maisie Lockwood, granddaughter to James Cromwell’s Benjamin Lockwood. She’s a strong well acted character who remains involved in the plot of the film throughout and contributes greatly to some of the major set pieces. Her familial connection to a major character in the early films in the franchise comes across as a missed opportunity which ends up leaving James Cromwell underused. There was a lot more to unpack from these characters than the film dared approach but Maisie is certainly memorable enough and makes for a welcome addition to the cast.

Visually the film is really impressive. The early set pieces on the volcanic island showcase some excellent special effects and J.A. Bayona manages to keep the threat level consistent while inserting a large dose of chaos that helps keep things interesting. The shift to horror brings with it some strong direction, engaging cinematography and sequences that are dripping with tension. The dinosaurs and the location are used to great effect and the mansion provides a refreshing locale that is big enough for the characters to hide in some of the time but small enough to feel like danger could strike at any time.

Not all of the sequences are great and the film does get bogged down in silliness some of the time. Some of it is welcomed and reminds us that this isn’t something to be taken too seriously but this is pushed a little too far at times to the point of it feeling too much like a panto at points which negatively contrasts the masterfully crafted tension and suspense. Overall it’s a mixed bag but there is more done right than wrong.

Jurassic World: Fallen Kingdom barely feels like the same franchise that began with Jurassic Park but in order for it to continue then it does have to grow, change and explore different things. This feels like a natural progression from the novelty and wonder of dinosaurs being brought back to life to something more naturalistic where the dinosaurs are a fact of life and have to be considered alongside the animals that populate the modern world. It’s something of a metaphor for the franchise itself moving on from the novelty value attached to the landmark visuals of the time to finding different ways to make use of those creations.

An entertaining entry into the Jurassic Park canon showing that this franchise still has something to offer audiences. The film offers some really well built set pieces, solid characterisation and some superficial ideas common to this franchise. There is some silliness that borders on pantomime levels of stupidity at times but on the whole the end result is something really entertaining that does more right than wrong. This franchise finally feels like its evolving and acknowledging that the novelty attached to the landmark visuals of the first film has largely worn off so needs to be replaced by finding different ways to make use of those creations.