The Flash of the present day is flung back in time and teams up with a team of heroes active during the second World War in Jeff Warnester’s Justice Society: World War II.

The DC animated films often make for really interesting projects as they have the freedom to tell a variety of stories without the limitations that come with live action media. There is also greater freedom when it comes to the storytelling and visual style so many of them end up being distinct and iconic takes on the source material.

Justice Society: World War II hangs on a fairly simple premise focused on Barry Allen aka The Flash (Matt Bomer) learning important life lessons. The film begins with him being unfocused and uncertain with major difficulties balancing his civilian identity with his superhero one. The heroes in his present are disconnected with no established team that can combat threats. An early sequence has him join Superman in battle purely by happenstance and the circumstances of that conflict accidentally throw him into the World War II era where he meets a well oiled team of heroes established to combat the Nazis. 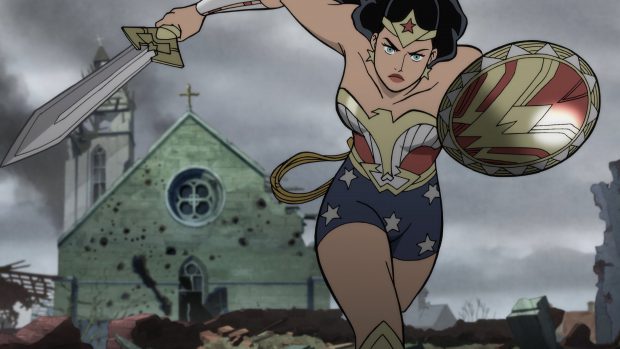 This team consists of Wonder Woman (Stana Katic), Hourman (Matthew Mercer), Hawkman (Omid Abtahi), Black Canary (Elysia Rotaru) and another Flash aka Jay Garrick (Armen Taylor) with them supported by the Human Steve Trevor (Chris Diamantopoulos). The film does a great job of quickly establishing the close knit team used to working together. Their camaraderie is brilliantly portrayed and the shared commitment they have to fighting the War is inspiring in the way the best superhero stories are.

Barry’s outside perspective on them is a valuable one as it allows for the natural exploration of the team dynamic as well as the individual characters as he learns more about them. Seeing a team of heroes working together in this way is an eye opening experience for him and forces him to confront certain truths in his own life. There are also important emotional lessons for Barry to learn through his experience of the interpersonal relationships within the team such as Wonder Woman’s relationship with Steve or Hawkman’s views on the importance of connection. There is a distinct emotional arc that Barry follows and it’s supported by his connection to those he finds himself surrounded by. Matt Bomer’s performance highlights Barry’s uncertainty and overall naivety while also making clear that he has a confidence in his abilities that makes him a skilled hero in his own right. His awareness of his own shortcomings helps endear him and Matt Bomer’s vocal performance presents the layers to the personality wonderfully.

The story itself meanders along in ways that are both predictable and at times uninteresting but the real weight is to be found in the characters. Stana Katic brings Wonder Woman to life in her vocal performance with strength and determination tempered by a compassionate foundation that she tries to ignore. There’s a hardened edge to the character that allows her to maintain her leadership of the team but there are several moments where it’s clear that she cares. That nuance is clearly conveyed by the excellent vocal performance and is used brilliantly at different points in the film. Jay Garrick’s plucky optimism and scientific curiosity compliments Barry’s naivety wonderfully and Elysia Rotaru’s turn as Black Canary is incredibly noteworthy though the character suffers from being relegated to a supporting role that doesn’t allow her potential to be fulfilled. Hawkman is decidedly one note as a character but the vocal performance is always believable and Steve Trevor acts as the heart of the group in many ways though is largely defined by his relationship to Wonder Woman and how their connection could represent weakness on her part. It’s not something the film delves into too deeply but it is there. In general the film has a lot of heart and isn’t afraid to lean into it.

Visually the film is really impressive. There’s a classic quality to the animation that suits the prevailing time period the story takes place in. Each of the characters are wonderfully designed and the environments are stunning in places. Set pieces are incredibly creative though more could have been done the two speedsters as the use of those associated abilities are typically very basic. Despite that there’s plenty of variety to the action afforded by the collection of characters and their personality comes through in the way they conduct themselves which makes most of the combat sequences more meaningful. 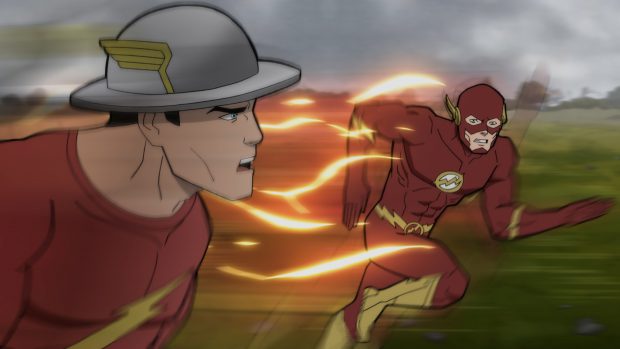 Another impressive entry into the DC animated canon with excellent visuals, strong characterisation and plenty of heart to carry the story. The story itself is meandering and at times uninteresting but the film really excels in its approach to the characters and their relationships. A time displaced Barry Allen is perfectly placed to observe the team and interpersonal dynamics which informs his own strong emotional journey. The voice actors all do an excellent job and the visuals are routinely stunning with some really creative action sequences that showcase the personalities of the characters involved which makes the sequences more meaningful.