Keeping Up With the Joneses

Suburban espionage is the order of the day in Greg Mottola’s Keeping Up With the Joneses when new neighbours come to a sleepy neighbourhood and immediately dazzle them with their worldliness.

As contrasts go there is a lot of mileage this. Putting the exciting world of international espionage alongside the day to day existence of working 9-5 and raising a family makes for some interesting comparisons and comical situations as each side fails to understand the other.

The suburban main characters are married couple Jeff (Zach Gaifianakis) and Karen (Isla Fisher) Gaffney who are at a loose end after sending their two sons off to camp and don’t know quite what to do with their newfound freedom until exotic neighbours Tim (Jon Hamm) and Natalie (Gal Gadot) Jones move in next door and give them something to obsess over.

It’s pretty obvious early on that Tim and Natalie aren’t quite what they seem simply because they seem out of place in a world where backyard barbecues are a way to spend the time. There’s nothing wrong with neighbourhood get-togethers like that but there are people who suit them and people who don’t. Tim and Natalie seem to be the latter and this is noticed early on. 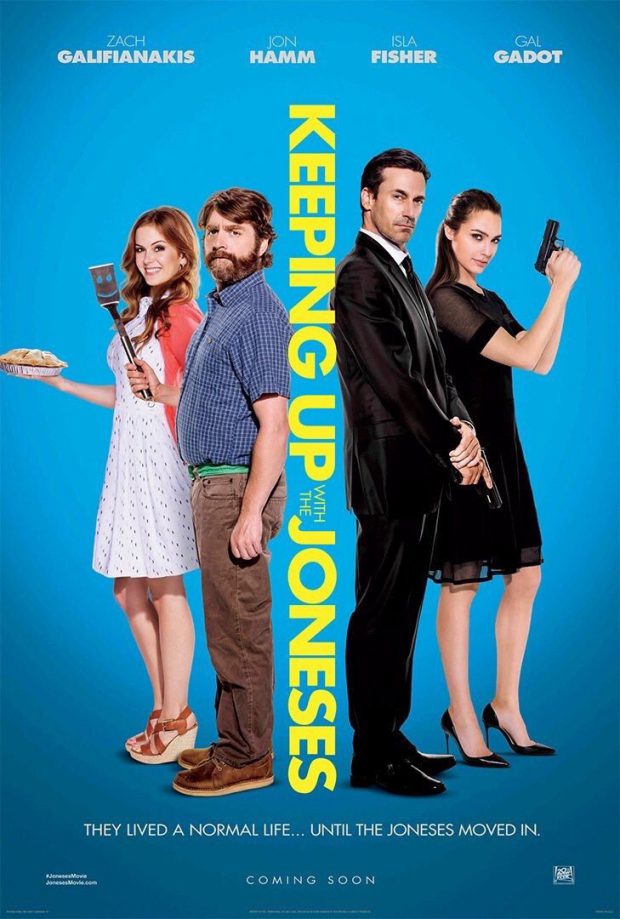 The whole situation is played for laughs and some of the jokes do land such as Natalie being completely unprepared for neighbourhood gossip and Tim not understanding the joys of making a friend. It can all be boiled down to each side not understanding the values of the other and there is definitely comedy in there at times.

Most of the film I didn’t find funny and the lack of regular laughter in the audience around me suggests that many others feel the same way. Many of the situations that could be funny are played in such a way that any comedy is stripped from them which is a shame because many of the actors involved should be able to deliver on this.

The funniest moment in the film involves Jeff and Tim’s visit to a Chinese restaurant that Jeff is completely unprepared for and the issues he has escalate as the scene goes on. It’s an example that should have been followed in the rest of the film but that sequence remains the highlight in an otherwise dull affair.

In general the acting is a mixed bag. None of the actors are technically bad but there’s very little to work with. I have found Zach Galifianakis funny in the past but very few of his lines land. The problem is that everything is so over the top when the everyman is the character trait that should have been emphasised. Jon Hamm also fails to engage with the material but does come across as effortlessly suave and sophisticated. Isla Fisher does a really good job but I can never believe her as being mousy as she is supposed to be here and Gal Gadot almost fails to register outside of a couple of scenes where her obvious movie star good looks are directly addressed.

As I’ve said above I did find some of it entertaining and the film never bored me so that’s something. A lot of this can be put down to a cast of likeable actors playing characters who aren’t offensive. I didn’t expect much when going into this and probably got more than I thought I would.

A fairly bland and forgettable comedy with a good cast that are sorely wasted. There are a handful of jokes that land but the majority don’t and the cast mostly fail to engage with the material. Any attempts at action scenes fall flat as well. This idea had potential that was mostly squandered but I never felt bored or overly irritated by the whole thing so it was better than I expected.