I wasn’t a fan of Godzilla. Despite its beautiful cinematography and exciting monster fight sequences the general experience was a dud so I was in two minds about whether this newly minted Cinematic Universe could deliver something worth watching. Thankfully Kong: Skull Island is much better than Godzilla in almost every way and suggests that there might just be some potential in a shared universe populated by giant monsters destined to battle each other.

This film makes for really fun viewing. It has a relentless pace that never stops for breath so it never becomes boring. The counterpoint to that is the film never achieves any sense of depth despite the hints that there was more beneath the surface to be explored.

The characters are fairly thinly written but they also have a really strong sense of identity. Tom Hiddleston’s James Conrad is a mercenary in dire need of an adventure, Brie Larson’s Mason Weaver is an anti-war photographer looking to uncover the truth, John Goodman’s Bill Randa is a monster hunter desperate to prove that what he has seen is real, Samuel L. Jackson’s Preston Packard is a soldier salty that America lost in Vietnam so looks for a War to fight and John C. Reilly is a comedic hermit stuck on Skull Island in desperate need of human interaction. 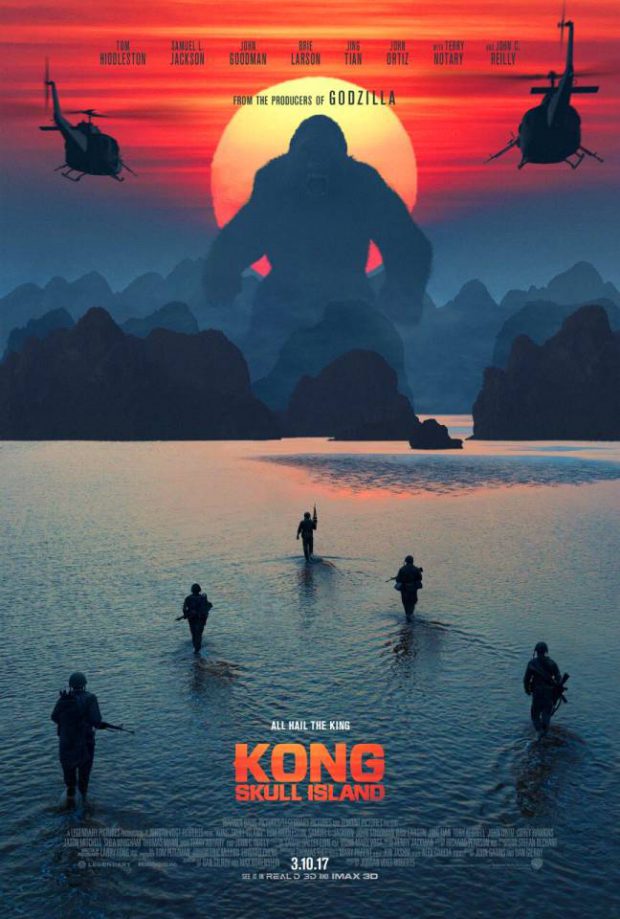 If they sound really broadly drawn that’s because they are and the surface of them is never really scratched but I’m of the opinion that this film doesn’t really need to do that. The important thing for me is that the characterisation was strong and the actors were all doing a really good job bringing these people to life. All of them have a part to play in the story and they pretty much stick to that without much deviation. Simple maybe but not bad by any stretch.

The highlights were Samuel L. Jackson and John C. Reilly. Setting the film in the aftermath of Vietnam was a really nice touch as it allows the soldiers to have a tired and defeated quality about them as well as the special brand of madness that only Samuel L. Jackson can bring to a role. For the purposes of the film, Jackson’s Packard is Captain Ahab and Kong is his Whale. As with any suggestion of depth in this film it doesn’t really go anywhere but Jackson’s performance made it work for me.

John C. Reilly could easily have been disposable comic relief but he manages to be so much more than that. Again, his character is one note but Reilly’s line delivery is flawless and he’s very believable as a man who has survived on the Island all these years. He even brings a really natural touch to the reams of exposition that he’s forced to trot out to deliver on Kong and the island’s backstory.

The film looks amazing. Kong is beautifully rendered and the cinematography backs up the Vietnam era setting with lots of fiery imagery and blood red sunsets to give the film its own identity within its time period. There are no shortage of action sequences involving Kong and all of them are great in their own way. An early sequence involving helicopters is tense, dynamic and exciting while establishing how terrifying Kong can be. The other sequences manage to do a lot with their oversized creatures cutting back and forth between the humans and Kong in a way that really works. There are a couple of underwhelming animal encounters but these aren’t frequent and don’t last long enough to drag the film down at all.

Kong himself also feels like a character. He doesn’t have the same level of personality he has in the Peter Jackson version or in the original but there’s definitely more to him than being a CGI engine of destruction. It’s clearly established that he’s non malicious while being fiercely territorial. The fact that he doesn’t cultivate a connection with any of the human characters lessens the potential to explore this but the attempt is appreciated.

A fun time at the movies and a fitting return for one of cinema’s most iconic monsters. The actors all do a great job with broadly drawn characters. Samuel L. Jackson and John C. Reilly are the definite highlights with the former delivering an insanely obsessed soldier and the latter managing to be the comic relief without ever taking it too far. Kong is beautifully rendered an the cinematography is gorgeous with some varied and engaging action sequences to move things along. Some of the other creature encounters aren’t up to much but these are few and far between and they don’t last very long. Kong feels like a character within the film but the lack of a connection with any of the human characters means that it isn’t explored as well as it could be.